A-Rod Called A Savage By Fans As He Poses With Red Porsche He Gifted J.Lo In 2019

Alex Rodriguez’s fans are in a frenzy thanks to a new photo that shows A-Rod posing with the red Porsche that he bought former fiancée J.Lo two years ago.

Alex Rodriguez, 46, didn’t get to keep the girl, but he did get to keep the car. The ex-MLB star, as fans know, is no longer together with Jennifer Lopez, 52, and the singer has moved on with former fiancé Ben Affleck, 49. But A-Rod still had a big smile on his face in his latest Instagram photo, which showed the dad of two posing with…. the red Porsche 911 GTS he bought J.Lo in 2019! Yep, Alex apparently kept possession of the $146,000 vehicle that he purchased for the singer for her 50th birthday back in 2019 while they were still engaged, and he had no problem flaunting it on his Instagram page on Aug. 18 for his nearly 4 million followers to see.

In the photo, Alex looked dapper dressed in a suit and tie as he lightly sat on top of the Porsche. Behind the Porsche were two other vehicles, though neither of those were gifts to J.Lo like the red sports car was. A-Rod looked so delighted to be the owner of the Porsche, and he proudly (and sarcastically) captioned his post, “I’m super down to earth.”

Naturally, fans went crazy over A-Rod’s pic with the Porsche. His followers correctly pointed out that it is the same vehicle he bought J.Lo for her 50th in 2019, and they couldn’t help themselves from making that known in the comments section. “Savage. Posing with the car he bought J.Lo for her bday lmfao,” one fan said, while another wrote alongside a laughing emoji, “not jlos whip no more.” A few of A-Rod’s famous followers also got in on the action: Tamar Braxton jokingly commented, “Looks down to earth to me,” and retired baseball star Johnny Damon dropped a comment in which he called A-Rod a “boss.” 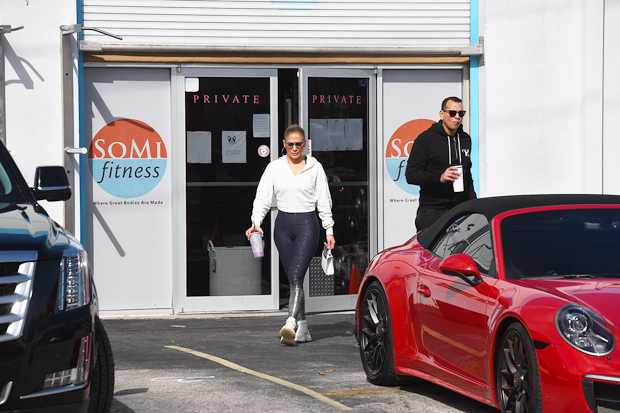 J.Lo received the speedy vehicle from her former fiancé when she turned 50 in July 2019. Alex spent roughly $146,000 on the Porsche in honor of the Hustler star’s milestone birthday, according to Page Six. They also celebrated her big day at the time with a massive party on Star Island in Miami, but beforehand, J.Lo reportedly went for a brief drive inside her new gift. “She took the car for a spin before the party with A-Rod and looked very excited,” a source told E! News at the time. “It came with a big gold bow on it and was delivered to their house,” the insider added.

Since their split earlier this year, J.Lo and A-Rod have been living very different lives. The “Jenny From The Block” songstress has been traveling around Europe and touring homes in Calif. with Ben, whom she was previously engaged to in the mid-2000s. Alex, meanwhile, appears to be doing well in the recent months, and even recently shared that he’s in a “great place“ in the wake of the highly-publicized breakup. “Whatever happened to me over the last year, I’m so grateful for it,” he told ET’s Kevin Frazier. “I’ve had five years of an incredible life and partnership, and also with my daughters, we learned so much.”