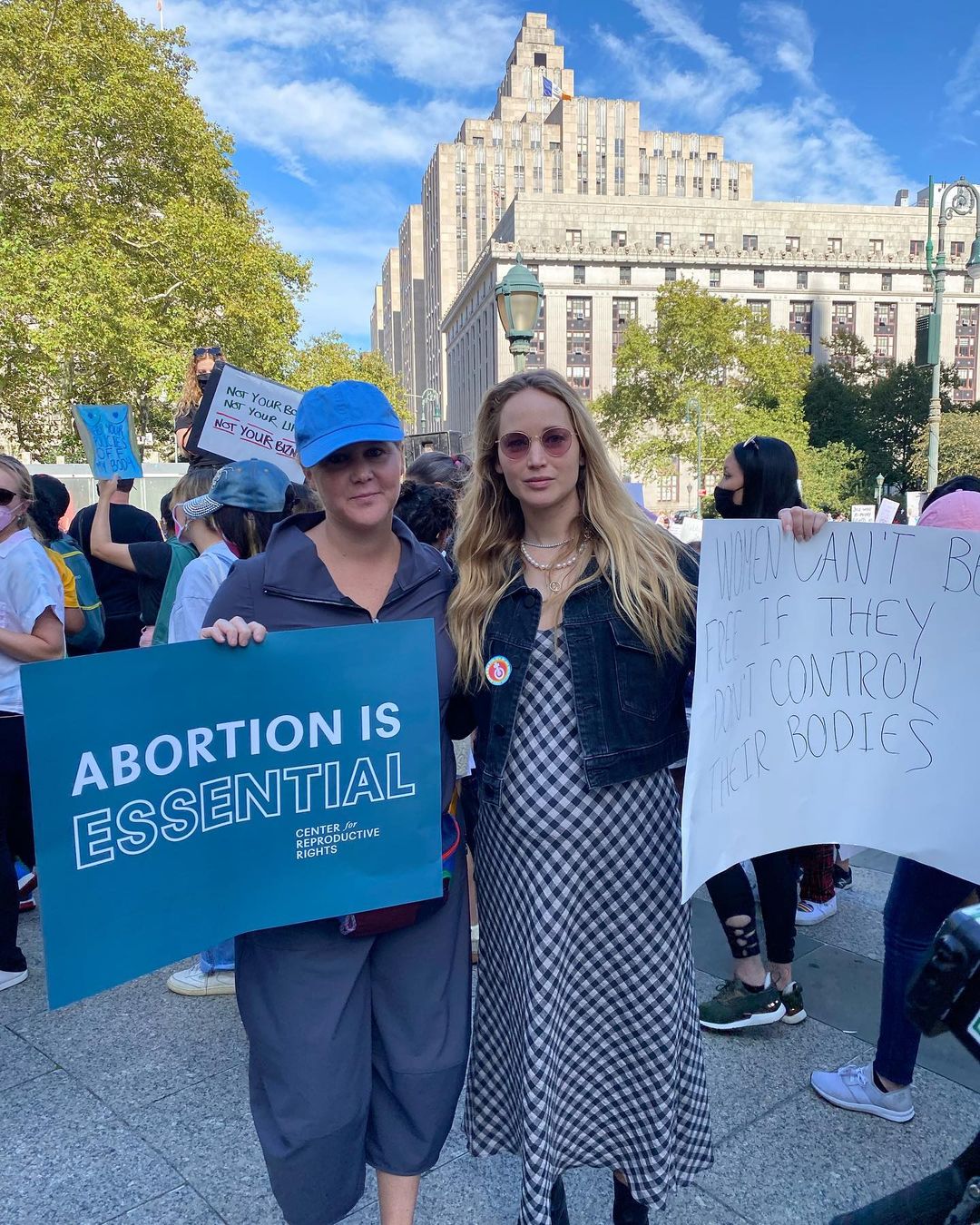 Over the weekend, millions of people showed up for hundreds of Women’s Marches across the US to protest the abortion bill in Texas and other legislation threatening Roe vs. Wade. The Women’s March started when Donald Trump took office and we knew women were screwed. There have been other women’s marches since the first, but they have not been as well attended. With everything we feared starting to come to light, Saturday’s protests saw record turn outs. And that includes some famous faces as well. In Washington DC, Amy Schumer and Jennifer Lawrence joined the fight at the Rally for Abortion Justice. Their appearance was especially poignant and not just because they are both so well known, but because Amy just had a hysterectomy and Jennifer is pregnant with her first child.

Jennifer Lawrence and friend Amy Schumer were among the thousands of people who marched in the Rally for Abortion Justice in Washington, D.C., on Saturday.

Schumer, 40, posted a photo from one of the hundreds of Women’s March protests happening nationwide alongside Lawrence, 31, who showed her baby bump. “I don’t have a uterus and she is pregnant but we out here @womensmarch @plannedparenthood #rallyforabortionjustice 🙌🏼🙌🏼🙌🏼,” Schumer captioned her Instagram post.

A representative for Lawrence confirmed to USA TODAY in early September that the actress and her husband, Cooke Maroney, 37, were expecting their first child together.

In Schumer’s photo Saturday, the comedian held a sign saying “abortion is essential” while Lawrence’s sign read, “Women can’t be free if they don’t control their bodies.”

The big news was that we got to see Jennifer’s baby bump, which she has kept out of the camera lens up until now. And good for Jennifer. She knew paps would want shots of her, so she used that to bring attention to women’s health. And Amy being there also makes a statement. She’s had an incredibly difficult fertility journey and to be out there pounding the pavement so soon after her hysterectomy is impressive. I don’t mean to prioritize anyone’s importance because everyone who is fighting to protect women’s rights is a soldier in the same battle. But I love when celebrities use their platforms wisely.

There were women at all the rallies and marches across the country. Brave to everyone who showed up or donated. It’s a rotten time right now with women’s rights being threatened and voter suppression targeting minorities. Let’s just remember, in the spirit of Amy and Jennifer, to show up for each other even if it’s not a cause that directly affects us.