Nina Warhurst, 41, was left blushing after a man gave up a priority seat for her in the belief that she was expecting a baby. The red-faced BBC Breakfast star joked that the culprit might have been the “breakfast” she had consumed that day.

“I know people say London isn’t a friendly city, but someone just offered me a priority Tube seat thinking I’m pregnant, which I’m not. So that’s nice isn’t it?” she wrote on Twitter.

She followed up with a photo of what she’d been eating, chuckling: ” Blaming my tiny breakfast!”

The Full English feast on her plate contained scrambled eggs, fried tomatoes, two sausages, hash browns and some mushrooms, alongside a can of Coca Cola

Those among her almost 33,000 followers who replied exclaimed that they weren’t sure whether to laugh heartily over the mishap or feel sorry for her. 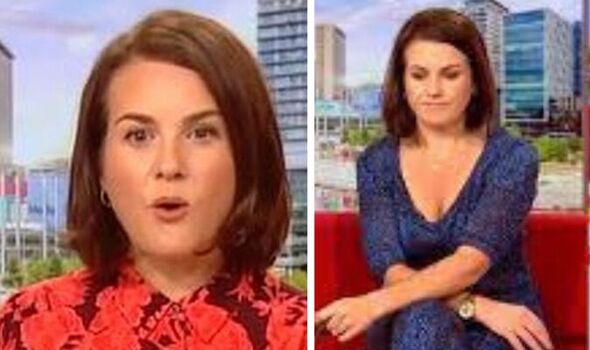 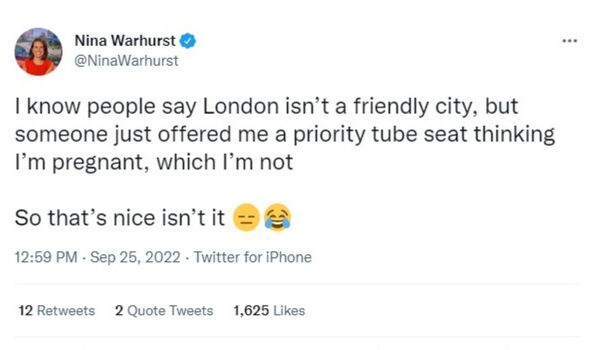 Meanwhile, some had their own stories of embarrassing moments from their daily Tube commutes to share.

“Same thing happened to me. When I realised why she was offering me a seat I just said thank you, sat down and rubbed my ‘full of crisps & snacks’ belly as too mortified to reveal the truth,” @LisahollHoland replied.

She continued: “Other ladies were looking at me with a ‘Oh we know the truth’ stare. Oh well, got a seat!”

Nina replied with a tears of laughter emoji, praising: “Well done. Your commitment to snackage paid off!” 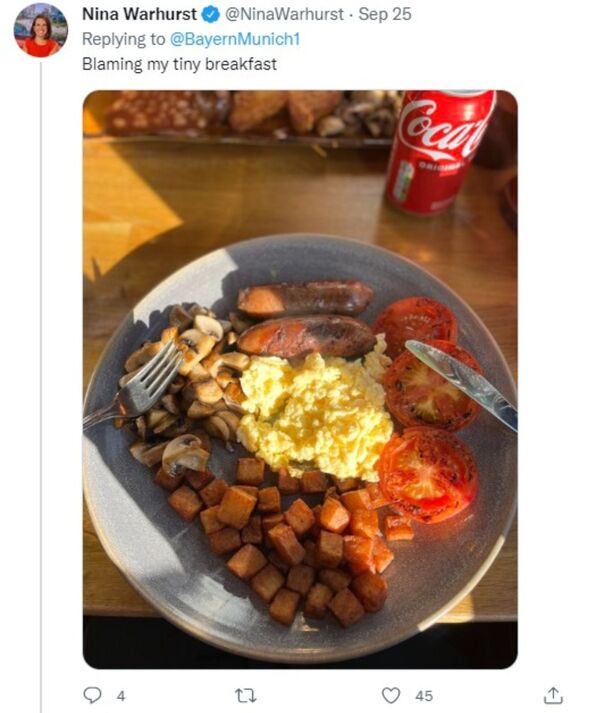 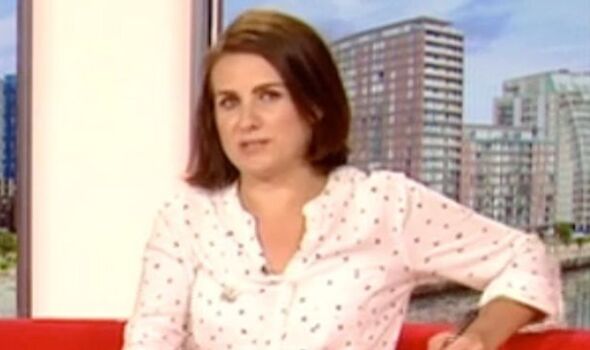 Another Twitter user nastily suggested that the man’s decision to give up his seat might have been related to Nina’s “old lady look”.

She quickly called them out for the jibe, replying to brand the tweet “not helpful”.

However, another user followed up on the troll’s comment with a real-life experience of age confusion.

@PaulMaleary joked: “The best foot in mouth [moment for me] was during an enquiry where we had to interview males from a certain age group.

“I went to this house and started to talk to the male. As the lady looked on I said ‘I need to speak to your son on his own’. The lady replied ‘He’s my husband!'”

@rbarneshp15 found the silver lining in her own embarrassing experiences when passengers had given up their seats.

“[When it happened to me], I’d take it as a compliment that they thought I looked young enough to be pregnant!” she shared.

@PageYahoo then revealed a moment when a seat hadn’t been offered in spite of a genuine pregnancy.

“A good friend of mine was heavily pregnant and got on a packed tube. A fellow traveller said to a seated passenger ‘She’s pregnant’, meaning could you give up your seat for her?”

He continued: “The seated passenger looked straight at my friend and said ‘Congratulations’ and remained seated!”

Meanwhile, although Nina is currently not pregnant, she does have two children, which she shares with husband Ted.

Her youngest is four-year-old son Michael, while she also has a six-year-old boy, Digby – both conceived after her 2014 marriage to her beau.