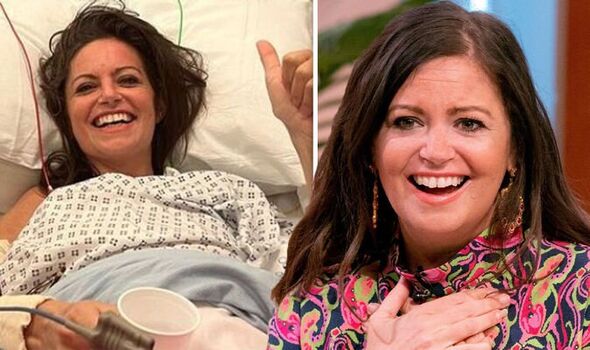 BBC podcast host Deborah James, 40, has been honoured with a damehood after raising £3.7million for various bowel cancer charities in just days. The mum-of-two recently announced her active cancer treatment was ending, and she was receiving end of life care.

Downing Street announced the news in a press release, which stated: “The Queen has been pleased to approve that the honour of Damehood be conferred upon Deborah James.”

Prime Minister Boris Johnson said in a statement: “If ever an honour was richly deserved, this is it. Deborah has been an inspiration and her honesty, warmth and courage has been a source of strength to so many people.

“Through her tireless campaigning and by so openly sharing her experience she has not only helped in our fight against this terrible disease, she has ensured countless others with the Big C have not felt alone.”

The Queen’s honours are usually announced as part of the New Year Honours or the Queen’s Birthday Honours, but they are occasionally given at other times in exceptional circumstances, including when Captain Sir Tom Moore recieved his knighthood.

On Tuesday, Deborah took to social media to bid a tragic farewell to her followers.

Deborah made the sad announcement that medical professionals nor she knew how long she has left.

She explained that she was being moved to hospice at home care.

Taking to Instagram in view of her 404k followers, the BBC podcast host wrote: “The message I never wanted to write.

“My active care has stopped and I am now moved to hospice at home care, with my incredible family all around me and the focus is on making sure I’m not in pain and spending time with them.

“Nobody knows how long I’ve got left but I’m not able to walk, I’m sleeping most of the days, and most things I took for granted are pipe dreams.”

Deborah continued: “I know we have left no stone unturned. But even with all the innovative cancer drugs in the world or some magic new breakthrough, my body just can’t continue anymore.”

Deborah gained a huge fanbase since she was diagnosed with stage three bowel cancer in 2016.

This sadly went on to become stage four, which was incurable.

Lorraine Kelly, Dan Walker and, more recently, the Duke and Duchess of Cambridge have paid tribute to Deborah on social media in the days since her sad announcement.

The Duke and Duchess of Cambridge also praised her fundraising efforts.

They praised Ms James for her “zest for life” and her “tireless efforts to raise awareness of bowel cancer” on Twitter.