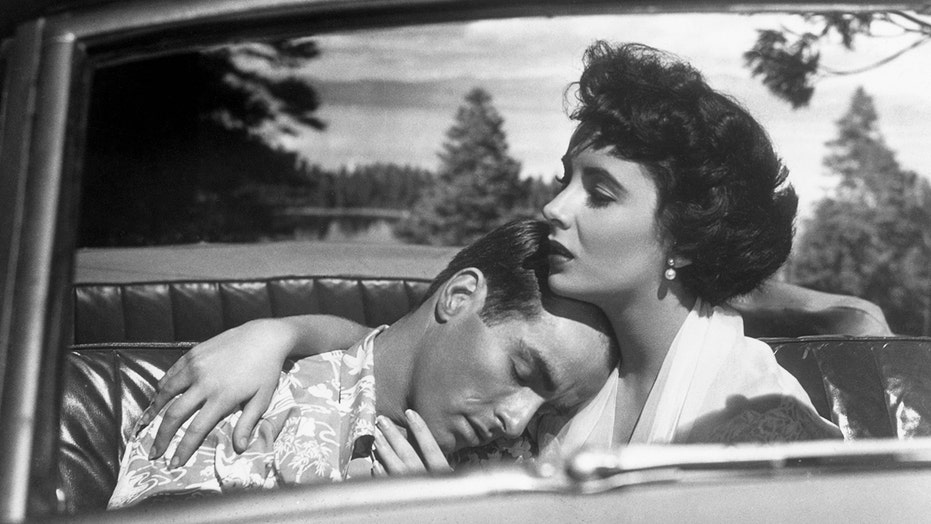 The violet-eyed movie star and her leading man first starred together in the 1951 drama “A Place in the Sun,” resulting in a life-changing friendship that lasted until Clift’s death in 1966 at age 45.

Recently, author Charles Casillo, who previously wrote about Marilyn Monroe, released a new book on the two screen legends titled “Elizabeth and Monty: The Untold Story of Their Intimate Friendship.” He tracked down some of the last living insiders who knew both Taylor and Clift over the years.

Casillo told Fox News that after exploring their “extraordinary” bond, there’s no doubt in his mind that Taylor and Clift were “soulmates.” 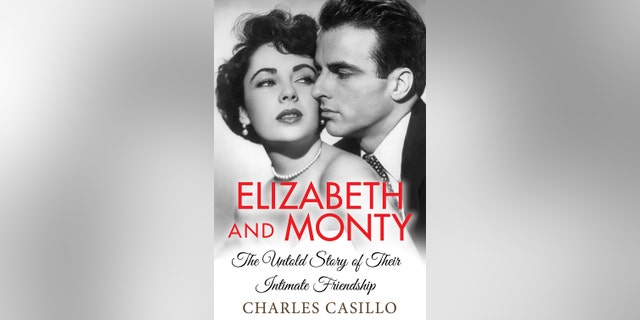 Charles Casillo has written a book titled ‘Elizabeth and Monty: The Untold Story of Their Intimate Friendship.’
(Kensington)

“Through the years, only bits and pieces of their friendship were reported,” he said. “After speaking to my sources, and doing the research, I felt a full exploration of that relationship was really necessary.”

“One of the big questions that has always been on everybody’s mind is did they or didn’t they?” he shared. “Were they sexually involved or not? My conclusion was that although Elizabeth would have very much liked to have been with Monty in that way, it wasn’t possible because he was predominately gay.”

Taylor was just 17 when she first worked with Clift, who was 29. It was a transformative time for Taylor, who first appeared on screen at age 10. As for Clift, he was viewed by many as a moody loner who avoided the Hollywood crowd and scoffed at the press. He viewed the industry as merely a movie-making machine with no regard for creating art.

Casillo said Taylor was initially “a little hesitant” and even “a little afraid” of working with Clift because of his reputation as a no-nonsense stage actor. Taylor, a product of the studio, saw herself as “a Hollywood nothing.” And she had good reason to be worried. Clift, who knew he would be working with her, barked at producers and labeled her “a manufactured star.” 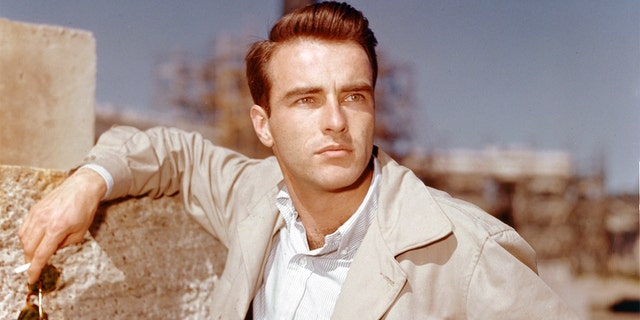 However, Casillo said there was electricity in the air when the two first met at director George Stevens’ office.

“There was an instant connection,” he described. “Elizabeth said he was the most gorgeous thing she’s ever seen. And Monty became excited to work with her. And the bond only grew when they began to work together.”

Despite their age difference, Taylor was smitten by the actor.

“She was a virgin and ready for her first dramatic love affair,” Casillo explained. “She thought Monty was gorgeous and intelligent. She was already being considered by many as an object of lust. And yet he was the first person who looked at her beyond her physical self. She truly fell in love with him in a sexual way.” 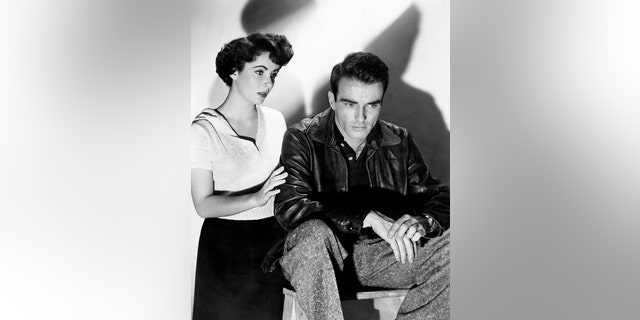 According to Casillo, Taylor was eager for a romance that would lead to marriage, an escape from her “controlling mother” and equally dominating Hollywood studio. While Clift was flattered that such a sought-after actress would fall for him so quickly, it simply wouldn’t work.

“He was gay, which she didn’t know at first,” said Casillo. “He was trying to convey that to her in certain ways without coming right out. For example, he would bring in men that he was dating onto the set to meet her. In later years, Elizabeth would say that it was very obvious. But that didn’t stop this great friendship from forming. Elizabeth once said, ‘I told him things that I’ve never told anyone else and I never will. And he told me things that I will never tell anybody else.’ That’s just the kind of connection they had.”

“The truth is, Elizabeth was insecure in her life as a woman and as an actress,” Casillo continued. “Monty wanted her to know that she was more than just her body, her face. He helped her build that self-esteem. It gave her a sense of encouragement that she too could truly be an actress with talent. He was deep and sensitive, but with Elizabeth, he could let loose, make jokes. He didn’t have to pretend and be somebody he wasn’t around her. He could be honest. And in those days, as a closeted man, that must have meant the world to him.”

Clift even gave Taylor his own personal nickname for her – Bessie Mae. 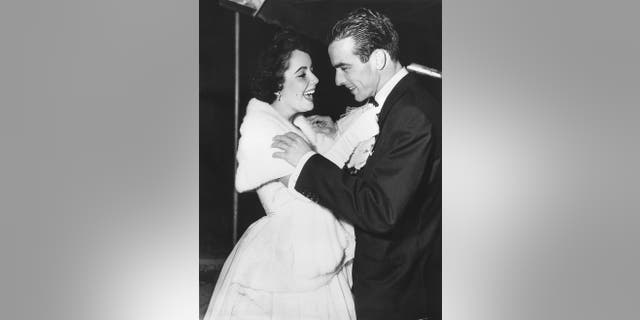 Montgomery Clift referred to his pal Elizabeth Taylor as "Bessie Mae" until his death.
(Photo by ullstein bild/ullstein bild via Getty Images)

“Finally she said, ‘Why are you calling me Bessie Mae?’” Casillo shared. “He said, ‘The whole world knows you as Elizabeth Taylor. Only I can call you Bessie Mae. There’s a part of you that belongs to me that no one else can have. And I call her Bessie Mae.’ He did that for the rest of their lives together.”

And it was Taylor who saved Clift’s life. In 1956, Clift left a dinner party at Taylor’s house high in the Hollywood Hills. He became drowsy from two “downers” he took to help him sleep when he got home. His car struck a power pole. Multiple reports claimed that the crash was so loud that Taylor heard it, prompting her to rush to the scene of the accident.

Casillo said Clift would have likely choked to death if Taylor hadn’t reached into his throat and pulled out his broken teeth that had gotten stuck in his windpipe. She then cradled his bleeding head on her lap while waiting for the ambulance to arrive.

“The car looked like an accordion,” said Casillo. “He was crumpled up inside and his face was completely destroyed. His nose and jaw were broken in several places. The car was still running and it was dangerous to get in. Because of the impact, the doors wouldn’t open. It was Elizabeth who pulled at the back door and managed to get in. He started choking and she actually stuck her fingers down his throat to pull out his broken teeth. Everyone at the scene said she literally saved his life.” 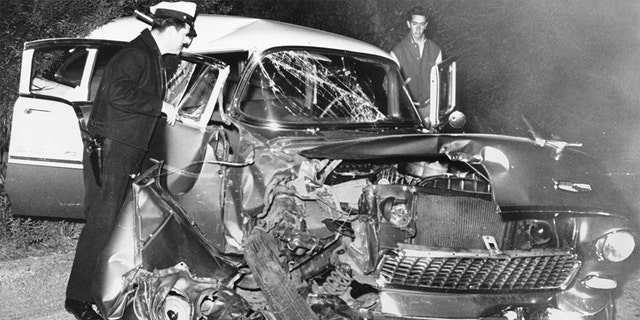 A policeman examines the wreckage of actor Montgomery Clift’s car after it crashed into a power pole following a dinner party at the home of Michael Wilding and Elizabeth Taylor. Clift suffered serious head injuries.
(Getty Images)

“His career suffered,” said Casillo. “His drug and alcohol levels took off. He became harder and harder to cast. His physical condition deteriorated to the point that no insurance company wanted to get involved. And no director wanted to hire him because he couldn’t get insured. But Elizabeth fought for him. She put her career on the line to make sure that he always got his chance to work. She became the most powerful person in Hollywood and she used her influence to make sure that Monty could still work.”

The two went on to work in two more films together – 1957’s “Raintree County” and 1959’s “Suddenly, Last Summer.” Shortly before Clift’s death, Taylor was looking for another screenplay they can do together. She found “Reflections in a Golden Eye” and felt it would be a perfect fit for them.

But the film never happened between the two. Casillo said Clift’s final years were “torturous” as he battled drug and alcohol abuse. He also struggled to find work that really spoke to him and “no one wanted to hire him.” 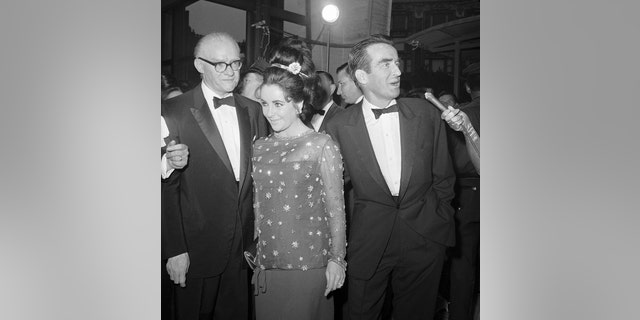 Montgomery Clift, known for his movie star looks, struggled to find work over the years following his accident.
(Getty Images)

Casillo said Taylor was “completely broken” when he was found dead in his New York City townhouse from a heart attack. At the time of his death, Clift’s personal secretary Lorenzo James said the actor had gone to bed “in good spirits” after recently completing a spy film in Germany titled “The Defector,” the Los Angeles Times reported.

“Richard Burton said when she heard the news, she went into her room to be alone,” said Casillo. “He could hear the screams from the room. She was just devastated. She later told the press, ‘I lost my brother, my friend.’ And I think she truly did.”

Taylor passed away in 2011 at age 79. Casillo hopes his book will shed new light on one of the greatest relationships to come out of old Hollywood.

“She was a true friend who loved you to the very end and I don’t think that gets enough attention,” he said. “As for Monty, he was all about truthfulness in his acting and life. He didn’t like to hide. He didn’t like to lie. So in many ways, they saved each other.”