What happens when technology from the 21st century meets sexist patriarchal standards from the 19th century? You get teachers using photoshop to cover up teenage girls’ skin without their permission.

Last week a 9th grade student named Riley O’Keefe saw her photo in the Bartram Trail High School yearbook and was shocked. Someone had taken her perfectly acceptable photo and decided the small amount of skin her blouse was showing was too much — and she was digitally censored (above).

Thankfully she chose to lead the charge in speaking out:

But Riley wasn’t alone. Over the next days it became clear this was a widespread issue, with several other parents complaining. Several students of the Florida school spoke out as well, saying the move made them feel ashamed and, ironically, “sexualized”. Ninth grader Zoe Iannone explained:

“I don’t know who is on the staff. I don’t know if it’s male or female, either way it’s still not okay. They open up the yearbook, saw pictures and that was the first thing they worried about. It was unfair and I was horrified, I was disgusted.”

The St. Johns County School District confirmed to local outlet Action News Jax that a total of 80 girls’ photos were digitally altered to hide even the tiniest hints of cleavage. 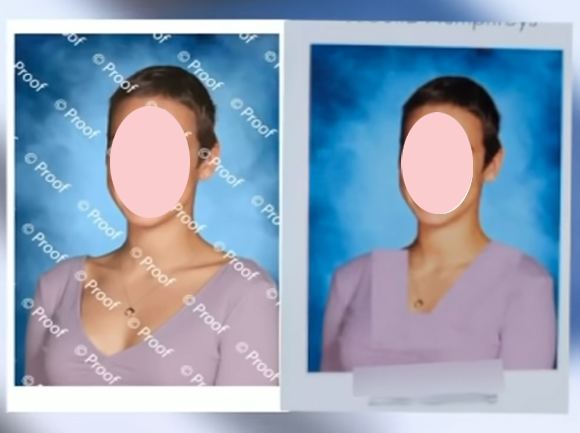 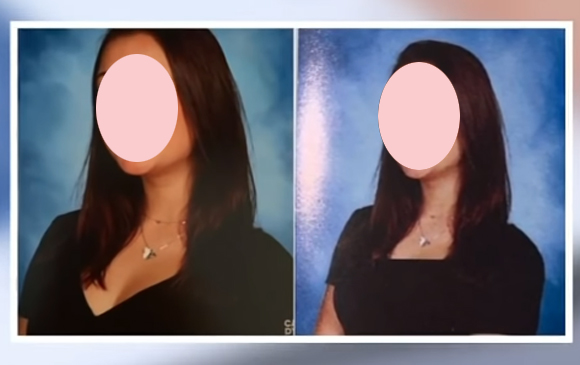 Ugh. This idea that women’s bodies are disgusting and sinful is SUCH backwards, patriarchal B.S.!

And yes, it was only female students’ photos. As Riley opined:

“The double standard in the yearbook is more so they looked at our body and thought just a little bit of skin showing is sexual. They looked at the boys, for the swim team photos and other sports photos and thought that was fine, and that’s really upsetting and uncomfortable.”

It didn’t take much searching to prove her point. The boys’ photos, in which they wore Speedos — showing way, WAY more skin — were not altered or removed in any way, showing a clear sexist bias. 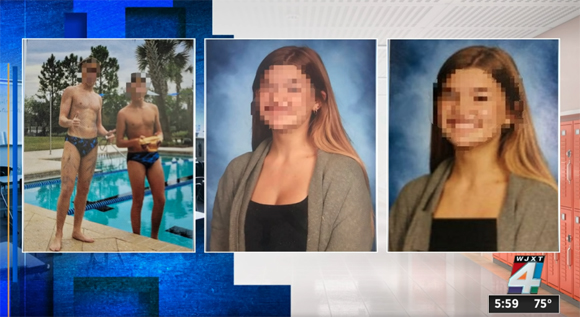 In response to the story, Bartram Trail released this statement confirming what happened — but not apologizing:

“Bartram Trail High School’s previous procedure was to not include student pictures in the yearbook that they deemed in violation of the student code of conduct, so the digital alterations were a solution to make sure all students were included in the yearbook. At this point the school is offering refunds to any parents calling about this issue. The school is receiving feedback from parents/guardians/students on making this process better for next year.”

Refunds are the least they could do. Where they should have memories of their freshman year to last a lifetime, these poor girls forever have a badly photoshopped picture reminding them there’s a big fraction of the world’s population that think their bodies are disgusting. Ugh.

About the whole “violation of dress code” thing? Many of the students and their parents are calling B.S. on that, saying no one said anything to them about violating the dress code in those outfits. You know how we can tell they’re telling the truth? All these girls were allowed to wear those outfits at school all day and TAKE THE PHOTOS IN THE FIRST PLACE! Don’t even get us started on how they’ve likely been wearing normal shirts like those the entirety of the school year!!

The school district told the news outlet it was a female yearbook teacher who made the call — though obviously that doesn’t make it much better. Women can be tools of the patriarchy, too, and what this Aunt Lydia did to these poor girls is gross. And this just goes to prove the point that a teacher made the call and was NOT based on this so called “violation of the student code of conduct.”