Home » Here's What to Expect from Princess Diana's Statue Unveiling

Prince William and Prince Harry recently reunited at their grandfather Prince Philip’s funeral—their first face-to-face interaction in more than a year amid a ton of tension. Philip’s funeral was a drama-free event minus a whole sartorial situation, and now William and Harry are scheduled to reunite again—much more publicly—in just a few short months for the unveiling of Princess Diana’s statue at Kensington Palace. The event will inevitably put a big spotlight on the brothers, who reportedly want to put their differences aside and focus on honoring their late mother. Here are all the details on the statue, including the location, the design, the sculptor, and the date of the unveiling:

The Statue Will Be in Princess Diana’s Favorite Spot

Specifically, her favorite spot on the grounds of Kensington Palace, known as the Sunken Garden. Back in 2017, the Sunken Garden was turned into a beautiful tribute to Diana on the 20th anniversary of her death—featuring a display of her favorite flowers like forget-me-nots, white lilies, white roses, tulips, narcissi, and daisies. Kensington Palace’s head gardener Sean Harkin said that the color scheme was a nod to Diana’s love for whites and creams in her own personal style. 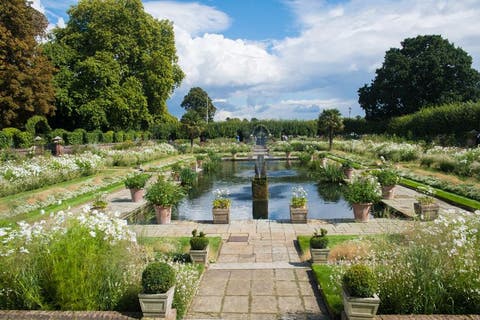 This would have been Princess Diana’s 60th birthday, and is clearly a significant day for William and Harry—who announced news of the statue’s unveiling in a rare joint press release via Kensington Palace: