Home » Celebrities » How Much Is Kerri Walsh Jennings Actually Worth?

Kerri Walsh Jennings is one of the most successful women’s volleyball players on the planet, to the point where her name is pretty much synonymous with beach volleyball. We honestly don’t remember watching the Olympics without her in it. The incredible athlete has had one of the most outstanding volleyball careers of all time, and she’s not done yet. Team USA shares that the star is one of the most decorated female athletes of all time, with three gold medals and one bronze during her Olympic career. She’s also won a few World Championships as well.

It’s no secret that Walsh Jennings’ career has been filled with success, but there have been peaks and valleys. In a chat with Lewis Howes, the volleyball star shared what she learned from her successes and failures. “I feel like my framework for so long in my life was ‘just do it right and don’t F up,’ you know? And then you fail … I was so supported, but there’s a lot of excellence in my life and a lot of very high expectations … but the flip side of that is that you identify yourself with your victories, with your successes, [and] with your performance,” she shared. “And Rio helped me breakthrough that a little bit.” She also noted that learning from failures has helped her grow, and for that, we give her a lot of respect.

Keep scrolling to find out more about how much Walsh Jennings is worth. We’ll give you a hint — we’re thoroughly impressed. 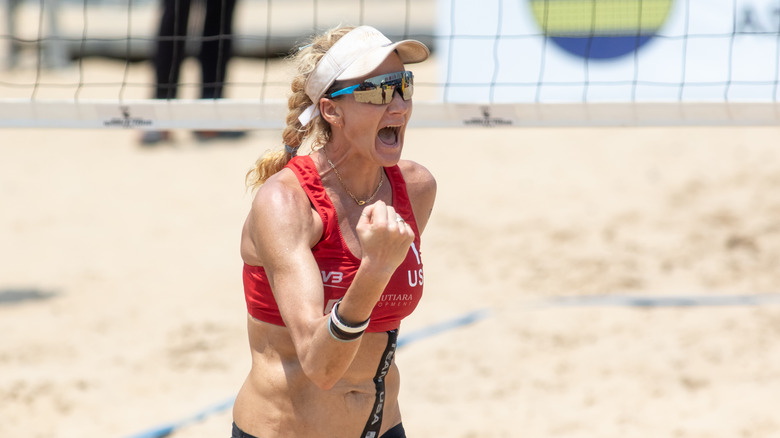 Celebrity Net Worth lists the fortune of Kerry Walsh Jennings at $6 million. The volleyball superstar has made a lot of money from sheer victories. Beach Volleyball Info lists her total career winnings at over $2.6 million. That’s a whole lot of cash for playing volleyball, and we’re totally digging it (get it?). With her storied career in athletics, it’s also no secret that Walsh Jennings has earned a lot of money off sponsorships and endorsements. According to Celebrity Speakers Bureau, Walsh Jennings works with many companies, including Speedo, McDonald’s, Gatorade, and Oakley. She also makes money off speaking engagements, but the exact figures of her contracts and speaking fees are hard to find.

With fame and fortune comes a pretty sweet pad. Walsh Jennings, her husband, and their kiddos used to make their home in Manhattan Beach, California, per Southbay. The ranch-style house had plenty of beach vibes and Western artwork, making it the pair’s dream home. “It’s all of these little things that add up to a feeling of a loved environment,” Walsh Jennings said of the space. “There’s nothing more important than a family’s home and the love that’s inside it. The materials inside are just that—they’re materials—but they signify a lot. That’s the fun part of expressing personalities and a shared vision.” By 2021, Insider reported that had moved to the mountains of Nevada, and we’re sure the home is just as lovely as their spot in Manhattan Beach.