‘I wouldn’t be here without my wife – Rugby legends tribute 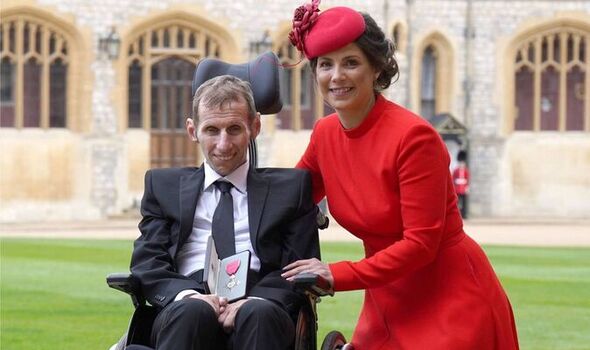 But wife Lindsey, 39, a physiotherapist for the NHS, says: “There will never be anyone else. No one can take Rob’s place.” They still laugh and joke despite Rob’s devastating MND diagnosis in December 2019.

The disease strikes nerves found in the brain and spinal cord that help tell muscles what to do. It affects 5,000 people in the UK at any one time.

Rob, one of Rugby League’s greatest players with eight grand finals and 20 international caps in his career with Leeds Rhinos, plus an MBE awarded this year, was told three years ago that he might have a year to live – two at most. He is unable to talk or walk.

But Rob is vowing to fight to see his children Macy, 10, Maya, seven, and Jackson, three, grow up.

The family, from Castleford, West Yorkshire, has taken part in a documentary for BBC Two to spotlight life with MND.

It shows Lindsey holding up her frail husband to watch the school sports day.

In touching scenes she carries him to his wheelchair, supports him in the swimming pool, helps him to the kitchen so they can laugh at the children’s pizza-making, and helps him to bed.

Rob told the documentary team: “She is my very own superhero and I could not be alive without her help with everything. I love her so much but she did not sign up for this.”

But Lindsey says: “I’m so lucky to be Rob’s wife despite the situation that we are in. Would I change things? Of course I would.”

“But we can’t, so we just have to enjoy every moment that we have together. But it’s devastating, it’s heartbreaking.”

The pair married in 2006 and Lindsey says they had a perfect life.

“Whereas the rugby boys would go for coffees, Rob would always rush home to be with the family,” she says.

She adds that she looks back and thinks that before his retirement in 2017 there may have been signs of what was to come.

“I remember him playing games and he’d come home and he couldn’t remember scoring a try,” she says.

She also remembers the slurring of his words and their neighbour saying to Rob, “Have you been drinking?”

But when the couple went to see a consultant in 2019 and were told he had MND, it was a “massive shock”.

Rob, who communicates via a machine, says he refuses to despair but the worst thing is “not being able to be a normal dad”.

“My kids have inspired me to be happy and I love it when they are loving life,” he says. “It makes you never want to give in.”