Is Prince Harry Really Going To Return To The UK?

Prince Harry returned to the UK twice in 2021. The Duke of Sussex flew into London back in April in order to attend his grandfather’s funeral. Two months later, he hopped on a jet and arrived in the UK ahead of a statue unveiling in honor of his mother, Princess Diana. These visits mark Harry’s first two trips back to the UK since he and his wife, Meghan Markle, moved out in early 2020. Each time that Harry has traveled to London, the media has been watching his every move; an ongoing rift with his father, Prince Charles, and his brother, Prince William, make for some very interesting headlines.

Harry was been back home in Montecito with Meghan and the couple’s two children, Archie and Lilibet Diana, since early July. Rumors about when he might return to the UK next have been swirling for weeks, with the Daily Mail reporting that the Duke of Sussex will be on-hand for another event honoring his late mother scheduled for September. Now, it sounds like Harry may have more than one upcoming trip to the UK planned for 2021. Keep reading to find out more. 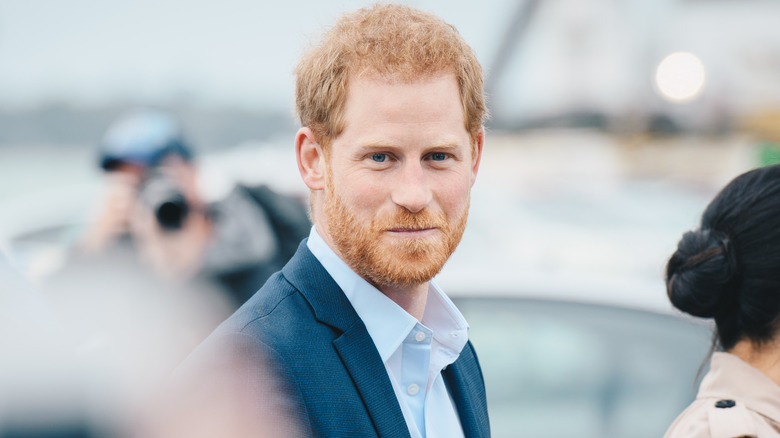 A new report from Express suggests that Prince Harry may be planning a trip to the UK in November. Sources told the outlet that the Duke of Sussex will be spending “a weekend in Nottinghamshire at the end of the year, to lead planning for next year’s military veterans’ Invictus games in Holland.” Harry will reportedly have a camera crew with him, and this will be considered a work trip, though he does plan to visit with his grandmother, Queen Elizabeth, while he’s in the UK. “Our understanding is that the Duke of Sussex will be accompanied by a small film crew in order to allow the public to see the hard work involved in planning these games,” a source told the outlet.

Harry and Meghan Markle are expected to head to the UK for the queen’s Platinum Jubilee in June 2022, according to the Daily Mail. If this happens, it will mark the first time that Meghan has been in the UK since Megxit in 2020. The Duke and Duchess of Sussex have not confirmed any of the rumored UK visits over the next several months. They are currently on a hiatus from work since welcoming Lilibet Diana in June.