Jennifer Aniston says, ‘We have to care about more than just ourselves here’, after she’s hit with criticism over her decision to cut off friends who refuse to get vaccinated.

Jennifer Aniston, 52, is facing backlash after revealing she has been cutting out friends from her life who have refused to get vaccinated against COVID-19. But now, she’s clapping back and revealing why she made that decision.

After a commenter on the below Instagram post wrote, “But if she’s vaccinated she’s protected correct? Why be worried about unvaxxed around her? (shrugging emoji),” Jen replied, “Because if you have the variant, you are still able to give it to me. I may get slightly sick but I will not be admitted to a hospital and or die. BUT I CAN give it to someone else who does not have the vaccine and whose health is compromised (or has a previous existing condition) – and therefore I would put their lives at risk. THAT is why I worry. We have to care about more than just ourselves here”.

Jennifer first revealed in the September issue of InStyle that she was forced to cut friends from her life who have “refused” to get their COVID-19 vaccine. She said she has no time for anti-vaxxers or those who “just don’t listen to the facts”. She said she believes those who aren’t getting the vaccine are basing their decision off “fear or propaganda”.

The Friends star first said that she spent much her of time during the pandemic keeping up with the news. But recently, she felt the need to take a break and breathe a bit. “I’ve really had to stop [keeping CNN on too much]. We all went through news fatigue, panic fatigue, during the pandemic because we were hoping one day we would wake up and hear something hopeful, and all we got was more insanity.” 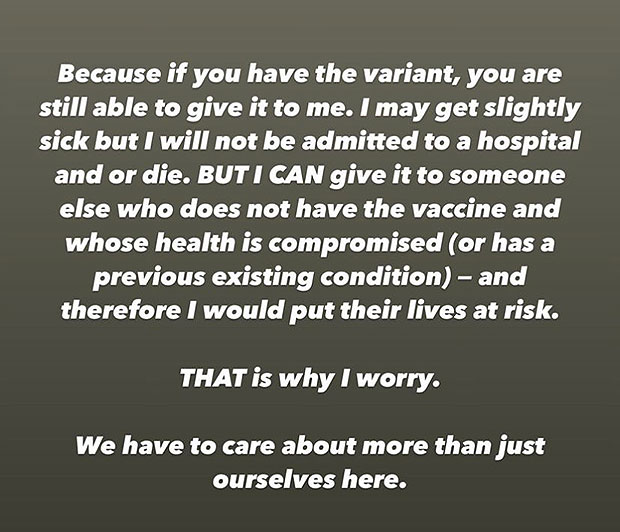 And it was after that that she initially started discussing anti-vaxxers, saying, “[There’s] still a large group of people who are anti-vaxxers or just don’t listen to the facts. It’s a real shame. I’ve just lost a few people in my weekly routine who have refused or did not disclose [whether or not they had been vaccinated], and it was unfortunate.”

She added, “I feel it’s your moral and professional obligation to inform, since we’re not all podded up and being tested every single day. It’s tricky because everyone is entitled to their own opinion — but a lot of opinions don’t feel based in anything except fear or propaganda.”