Jennifer Lopez’s mother just made out a big winner in her daughter’s rekindled romance with Ben Affleck.

Guadalupe “Lupe” Rodríguez is enjoying the spoils that raising one of the world’s most influential pop stars provides as the 75-year-old just put her acting chops on full display in a commercial for WynnBET’s new sports betting app.

The advertising spot is directed by Lopez’s boyfriend and sees Rodríguez risking it all by throwing all of her coins into a slot machine, of course, hoping for a big payout just as the “Argo” star meanders on by.

“Come on, Lupe!” she exudes while simultaneously playing two machines at once. “You can do this, girl, just like the slots in St. Louis!”

Fans of the couple will recall Affleck was photographed at the famed Wynn resort back in June, and reports at the time pointed to the Oscar winner filming something – folks just weren’t sure as to what it was.

“Guadalupe loves Ben and is happy that he is back in Jennifer’s life,” a source close to the actor told E! News at the time. “They enjoy gambling together and have done it in the past. Ben had the opportunity to work in Vegas this week and she came out.”

Rodríguez is an expert gambler and back in 2004, reportedly once took home $2.4 million on a $3 investment at a casino in Atlantic City, according to Entertainment Weekly. 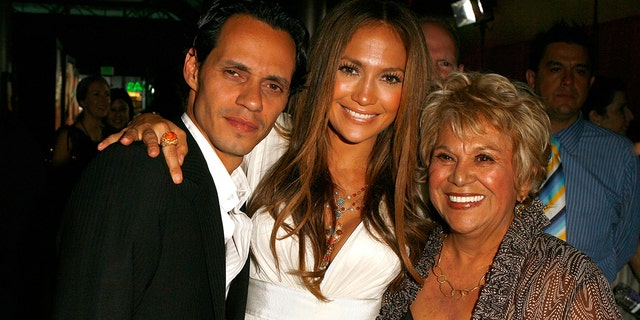 Jennifer Lopez’s mom, Guadalupe Rodriguez, made a cameo in Ben Affleck’s new ad for WynnBet. She is pictured here with Lopez’s ex-husband, actor Marc Anthony, in 2007.
(Photo by Jeff Vespa/WireImage)

Lopez and Affleck were previously in a relationship from 2002-2004 and were engaged for a time. The end of their relationship was widely chalked up to intense media attention on the two, and they’ve both said as much in interviews since the breakup.

They rekindled their relationship after Lopez split from her fiance Alex Rodriguez, whom she started dating in 2017 before splitting up earlier this year.

Affleck’s most recent relationship before the “Let’s Get Loud” singer was with actress Ana de Armas, whom he dated for about a year before they went their separate ways in early 2021.

Lopez was married to singer Marc Anthony from 2001-2014. The ex-couple shares 13-year-old twins Max and Emme. Affleck was previously married to Jennifer Garner. They have three kids together.