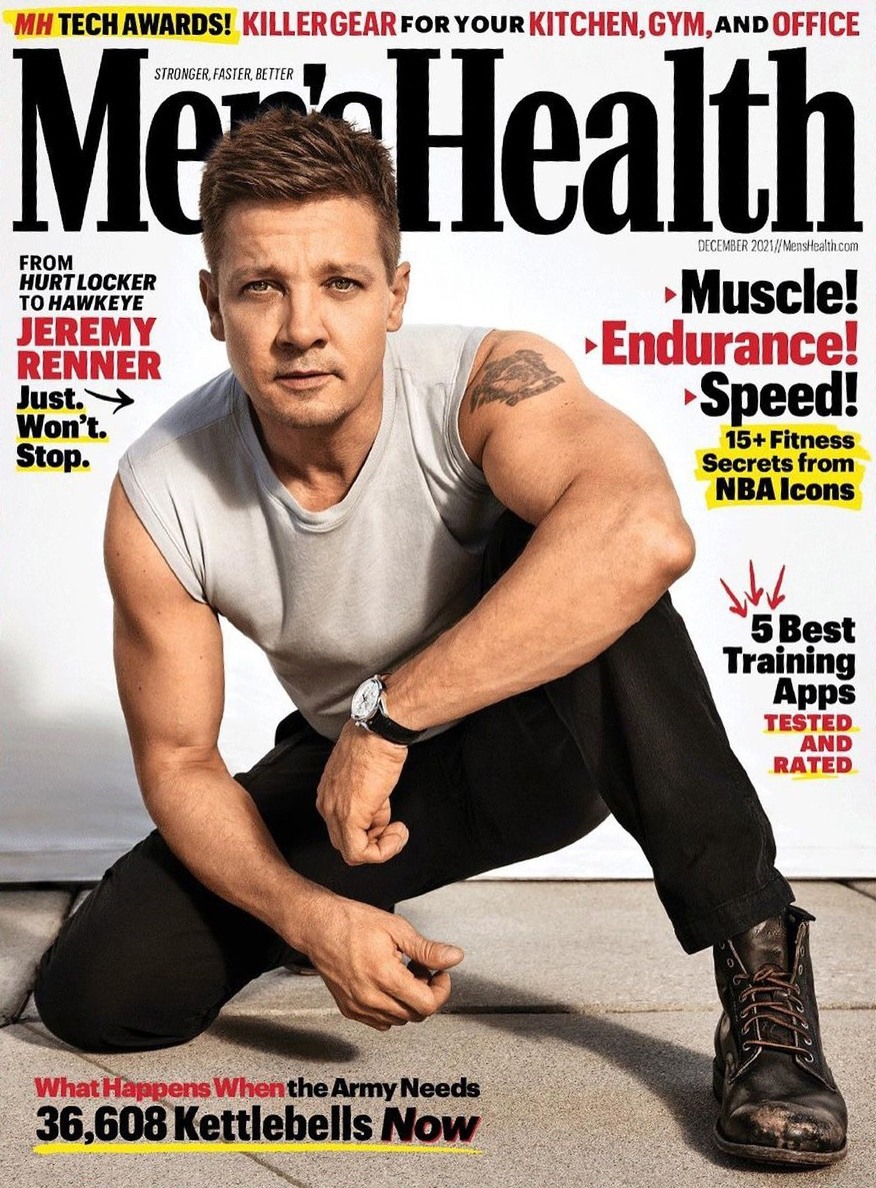 Jeremy Renner covers the latest issue of Men’s Health to promote Mayor of Kingstown and the Disney+ Hawkeye series. The interview is… well… interesting, I guess. It’s been a while since I’ve read an interview with Renner, honestly, and I forgot how he always comes across like an angry little guy with a chip on his shoulder. This Men’s Health piece could should be cited as a prime example of “men performing their masculinity” too, because it’s all about how he’s a big manly man who collects fire trucks and would never do a celebrity line of tequila. Of course, there’s also a reference to his contentious divorce from Sonni Pacheco and their custody battle over Ava. Last we heard, Renner was trying to get his support payments reduced and Sonni accused him of threatening her with a gun and biting their daughter. Some highlights from yet another bonkers Renner interview:

He buys old firetrucks & fixes them up to protect his Tahoe neighborhood: “I’m using fire trucks for defensible space and for protecting my neighborhood, all the people up there.” He spent nights bidding on fire trucks in online auctions, and he’s amassed quite a few. “I had 30 fire trucks a hundred feet from a hydrant. Not because they’re there to firefight, but they all potentially could.”

He has 200 vehicles at his Nevada ranch: “It isn’t a horse ranch. It’s more of a horsepower ranch.” Beyond fire engines, Renner is restoring and reimagining utility vans; an ambulance, which he is converting into a veterinary clinic; and a slew of city buses, which he has earmarked to become tiny homes and glamping accommodations. “I try to do things with a flow, and never square peg/round hole something. Why force it? Water flows over a rock. It doesn’t just stop when it hits an obstacle; it moves around it, right? That’s how it is with life. It’s my religion, my belief system. Whether it be a bus or a movie or a home or how I parent, that’s in everything I do.”

He’s not an effete celebrity: “I never wanted to be famous. I still don’t. Everyone is like, ‘You should buy a tequila brand,’” he says, mocking the know-it-all tone of a stereotypical Hollywood suit, even as a pack of them pass our table. “F–k that. I bought a bunch of fire trucks. So f–k you, Ryan Reynolds or George Clooney or whoever. I’ll come put out the fire on your agave farm.”

Actor lessons. “Once you’re fired, then you become a real actor,” Renner says. Another: “Networks can kiss my whole ass.” Perhaps the most critical takeaway: “Never take a job for money.” Renner says he never has.

He turned down the title role in Hellboy. “I said no to more money than I’ll probably ever make. I was focused on what I wanted to do and how. I just felt if I wasn’t connected to the material—even though it was a great director and a great job—I don’t know how I’m going to do anything exceptional.”

He can’t do light conversations, not even with Ava: “I’m just stuck with being me. I can’t have light, fluffy conversations. I can’t do it. I can’t f–king do it, dude. I’d rather run into traffic. I’m polite. I’m cordial. And I get the f–k out of there, fast.”

He’s never been in a fight: “I’ve never been in a physical altercation in my life. Why combat when you can find solutions to move around? It’s all ego based when it comes to fighting. I’ve been fortunate enough to be good at problem-solving. It doesn’t mean all the solutions are perfect or that they’re even good. But at least it’s a solution instead of doing nothing. Stagnancy is complacency. It’s like a pond: If water does not move, it sits and collects scum. A river is moving; it’s alive and ever-changing.”

On Sonni Pacheco: Renner denied [all of her claims] again in our interview, declining to address the allegations specifically. “I don’t respond publicly or privately to nonsense. It only empowers it. . . . If you respond to it, you give it gas. I don’t fuel sh-t fires. I just don’t do it. I refuse to.”

Men’s Health brings up the fact that at one point, Marvel was seriously considering dropping Renner from the Hawkeye role, and they considered not doing this Hawkeye stand-alone series. Nothing ever came of those momentary qualms, and I would assume Marvel/Disney does not want Pacheco’s accusations to be repeated during promotion for Hawkeye, although “If you respond to it, you give it gas. I don’t fuel sh-t fires” isn’t really “no comment.” He’s truly referring to his ex-wife as a sh-t fire. And he’s collected all of those fire trucks! Now I get, he’s the wannabe fireman, she’s the sh-t fire. Or at least that’s what he wants people to believe.