John Travolta posed for a sweet selfie with daughter Ella and son Benjamin on his first Father’s Day since his wife Kelly Preston died of breast cancer at age 57.

This Father’s Day was a bittersweet one for John Travolta, 67. On Sunday, June 20, the Grease actor shared a heartfelt selfie to Instagram with his children Ella, 21, and Benjamin, 10, on his first Father’s Day without wife Kelly Preston, who passed away in July 2020 at age 57. John captioned the photo, “Happy Father’s Day everyone! It is a privilege to be the father of these two beautiful children – thank you for the honor and my love and respect to all fathers.” Ella sent some love back to her dad on the post by commenting two heart emojis and a kissy-face emoji.

Kelly tragically died on July 12 after a private two-year battle with breast cancer. Since her death, John has been open about his grief of losing his wife of 29 years. “I have learned that mourning someone, mourning, is personal,” he told Esquire Spain in April. “Mourning is individual and experiencing your own journey is what can lead to healing. The most important thing you can do to help another when they are in mourning is to allow them to live it and not complicate it with yours. That’s my experience.”

In that same interview, John said he was focused on bettering his kids’ lives in the wake of Kelly’s passing. “I will ensure the future of my children, help them with what they want to do with their lives,” he told the publication. “It is what I do with Ella now with her films and teaching her to work in the profession. Ben is barely ten years old. I want to help him evolve because he has his whole life ahead of him.” 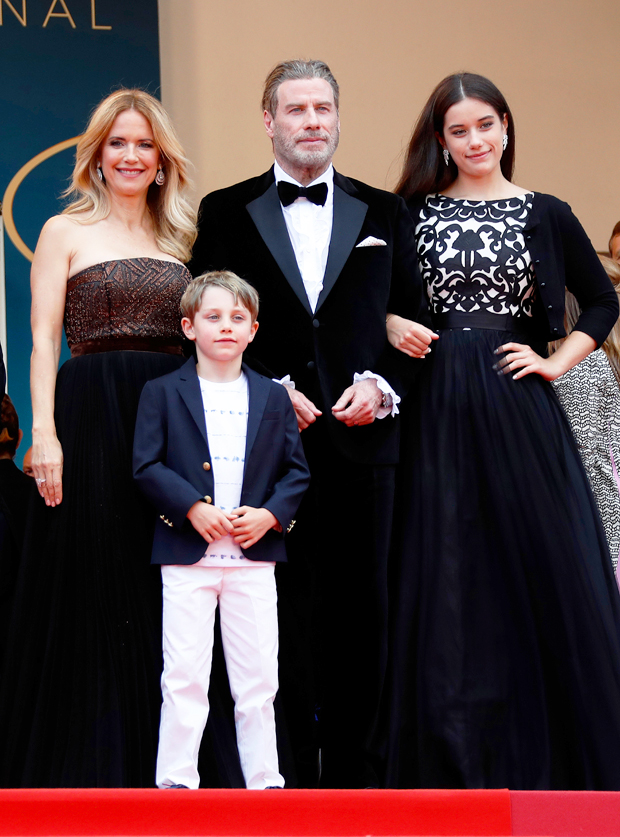 John, Ella and Ben were all together in December 2020 to mark the first Christmas after losing Kelly. “Say merry Christmas, Ella!” John said in an Instagram video as he filmed his only daughter, who waved for his followers in front of their lit-up Christmas tree. The actor kept filming as he reached Benjamin, who sat on a chair enjoying a sweet treat. “Say merry Christmas!” he prompted his son, who also greeted the camera. “Merry Christmas from the Travolta family!” John wrote alongside the short post.

The Travolta family sadly experienced tragedy even before Kelly’s death. Eldest Travolta child Jett passed away at just 16 in 2009 after a seizure. In April 2020, three months before Kelly died, John and Kelly each honored Jett on what would have been his 28th birthday. John shared a black and white pic on Instagram that showed him and Jett looking at each other and smiling, while Kelly posted a snap of her posing while smiling and hugging her precious boy. “Happy Birthday Jetty! We love you! ❤️,” John captioned his post. Kelly wrote, “Happy Birthday to our sweetest Jetty, we love you!! 💖✨” on hers.