The Kanye West carnage continues. In Ye’s latest attack on Pete Davidson and the ‘leftists’ he thinks are ruining the country, the rapper mocked the tattoo the ‘SNL’ star got of Hillary Clinton.

Kanye “Ye” West resumed his social media assault on Pete Davidson on Wednesday (Mar. 16). Ye, 44, first shared a screenshot of a Google search for Dave Sirus, the writer who supposedly posted the chat where Pete, 28, claimed he was texting Ye from Kim Kardashian’s bed. “Come on, Dave, please help write some more culturally irrelevant jokes for SKETE,” wrote Ye, using the profane nickname for the Saturday Night Live star. “You don’t have to have talent these days. You just need a Hillary Clinton tattoo.” After that, Ye posted a screenshot of Pete’s tattoo of the former presidential candidate. “Tramp Stamp,” added Kanye. “Pete the tramp. Here’s the stamp.”

Pete’s tattoo of Hillary is real. In December 2017, Pete said he wanted to get Hillary “a Christmas gift,” so he got a tattoo “of my hero. Thanks for being such a badass and one of the strongest people in the universe.” Hillary responded that it “makes it significantly less awkward that I’ve had a Pete Davidson tattoo for years. But seriously, I’m honored.”

Ye’s tattoo taunts were not the only attacks he made in the early morning hours. The “Eazy rapper shared a screenshot of a 2019 Breitbart article, one where the right-wing publication claimed Pete “Enrages Audience with Jokes About Having Sex with a Baby.” Ye wrote, “Yet another reason why SKETE gotta stay away from my children. Oh, and nobody noticed that he ain’t show up to SNL Because Mr. I can help you with meds had a mental breakdown after we ran him off the internet…Apologize to your family for being in your family.” Ye also posted how he was “concerned that SKETE will get my kids mom hooked on drugs. He’s in rehab every two months.” 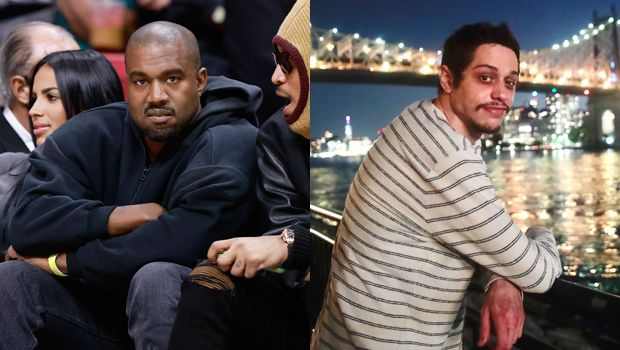 The Breitbart article was about a stand-up routine at The Bell House in Brooklyn where Pete told a story about babysitting a friend’s child, according to Page Six. The alleged child in question was teething, and Pete remarked that it began sucking on the comedian’s finger. Pete joked that “I don’t want to f—k this baby, but he’s asking for it.” Breitbart took offense to this, but as Ye himself explained after people blasted him for burying “Skete” alive in his first “Eazy” video, art is “protected as freedom of speech; art inspires and simplifies the world; Art is not a proxy for any ill or harm; Any suggestion otherwise about [Pete’s] art is false and mal intended.”

Ye even referenced the decapitated “Skete” video in a Wednesday Instagram post. “Ya’ll ready for Coachella,” he captioned a screenshot of the flowers growing around “Skete’s” head. Ye apparently will go through with his scheduled headlining set at the 2022 music festival, despite threatening to pull out unless Billie Eilish apologized to Travis Scott for allegedly mocking the deadly AstroWorld tragedy. Billie pointed out that she “never said a thing about Travis,” and it appears that was enough to placate Ye.