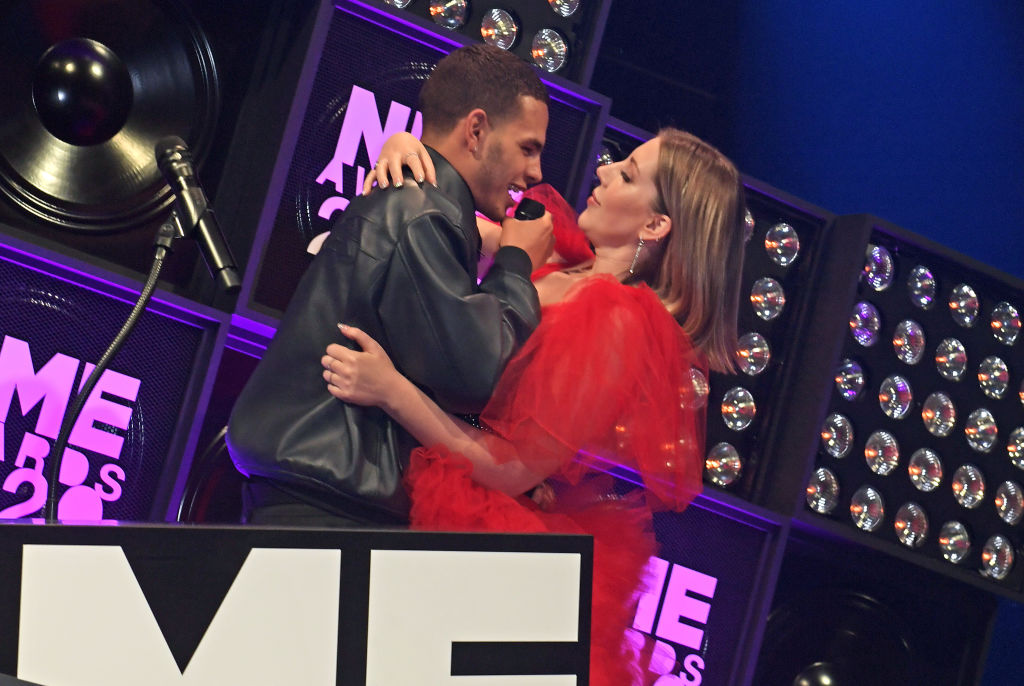 Katherine Ryan wants fans to uncancel Slowthai after he harassed her on stage at last year’s NME Awards, confessing she was worried about him amid the backlash he received.

The comedian has no beef with the Doorman rapper, 26, who later kicked off at audience members and was escorted away.

Slowthai has apologised unreservedly for his ‘inexcusable behaviour’ after making sexual remarks to Ryan, 37, at the bash attended by Taylor Swift.

But the Canadian comic, who was hosting the event, likened their exchange to pantomime.

‘People are quick to judge a situation they didn’t see first-hand,’ she said.

‘When we take little clips of something and put them on the internet, it can easily be taken out of context.’

She added: ‘I really admire Slowthai and think that situation was missing a lot of nuances once it got on social media.

‘It was like a pantomime and it’s very different if that interaction had taken place at a bus stop. It’s a show. It’s all about the comedy of that night, and I think people took it the wrong way.’

Fearful for the rising star over the scale of the backlash, she said: ‘I was concerned to see the level of vitriol directed towards him.

‘That’s why I did everything I could to calm the situation because it was ridiculous. There’s a culture looking to expose everyone right now and that’s really wrong.’

Becks in your arms … Vic’s Valentine treat is so sweet

David Beckham proved the honeymoon can last 22 years and counting… as he snuggled up to his wife Victoria like it was a first date.

Beaming in a Valentine’s Day selfie, Becks dubbed fashionista Posh the ‘most inspiring’ wife and ‘amazing mummy’ in a sweet caption.

And Victoria looked like she was in heaven. The 46-year-old cuddled up to the former England football captain with her eyes closed while clutching a glass of vino.

For hubby Becks, 45, a display of lifelong commitment could be seen in the image — he has the ex-Spice Girl’s name inked on his hand.

The pair are enjoying being back together after Becks last week flew to check out his £11million investment in football club, Inter Miami.

Meanwhile, a drink and a cuddle was exactly what Posh needed after a busy few days of presenting her fashion week collection remotely.

As well as being smitten with David, who she dubbed the ‘best husband’, she had previously gushed about the plonk, saying: ‘I tell myself that’s it’s really good to drink red wine.’

Impressing Anais will cost you a packet

Sharing a list of her likes and dislikes, the 21 year-old daughter of rocker Noel tweeted: ‘Don’t enjoy people tweeting me Oasis lyrics.’

But after keeping her dad’s fans at bay with the post, she confessed: ‘Do enjoy pickled onion Monster Munch.’

The model has recently moved into her own flat. She had been living with her boyfriend, 26-year-old chef Julius Roberts, at his family’s farm in Devon.

Why James was so late late to dieting

James Corden was afraid to go on a diet because it’s ‘not very sexy’.

The Late Late Show host, 42, joined WW — previously Weight Watchers — at the start of the year and explained why he had been reluctant to do it for so long.

‘As a man, to say that you’re on a diet… it’s not very manly to want to make changes in your own health somehow. Because men drink beer, we go out and it doesn’t matter what you look like,’ he told Oprah Winfrey at the WW Your Life in Focus virtual event. ‘I actually think it is the single most positive, sexy thing you can do to say, “I would like to be a bit healthier for my family, for my children.”’

James also praised his wife Julia Carey — mum to son Max, nine, and daughters Carey, six, and Charlotte, three ‑ for supporting him on his weight-loss journey.

‘My wife has been incredible … amazing,’ he said.

‘I’m on the start of a journey that I’m determined to finish. I’ve lost 16lb in five weeks… and I’ve been doing some exercise, which I hate. I can’t bear it. But my wife is so good at it.’

Dashing Duke’s playing it for laughs…

The 31-year-old — who plays Simon Bassett, the Duke of Hastings, in Netflix’s most-streamed drama ever — will present the legendary US comedy show this Saturday.

Insiders say he will parody his raunchy role as a dashing bachelor, committed to avoiding marriage until he meets his match. Rapper Bad Bunny will be the musical guest in the NBC comedy show.

Page follows in the footsteps of A-listers Robert DeNiro, Chris Rock, J-Lo and Eddie Murphy as a host of the show.

Bridgerton will return for a second series, Netflix has confirmed.