The following story contains light spoilers for Episode 1 of Loki.

Just from trailers and promotional materials alone, we knew that Loki, Disney+’s latest entry in the Marvel Cinematic Universe would be a deeply-impactful, time-traveling journey. But we didn’t expect for the first episode—the first episode!—to offer an alternate history explanation for one of the biggest unsolved mysteries in U.S. history before the time-travel stuff even got started. And the first episode did exactly that, showing, in a mid-conversation between Loki (Tom Hiddleston) and Agent Mobius (Owen Wilson) flashback that mysterious plane hijacker D.B. Cooper (back in 1971) was actually none other than the God of Mischief himself.

The scene plays out like some sort of deleted scene from Mad Men—remember those Don Draper is D.B. Cooper rumors?—crossed with a bit of a James Bond audition for our pal Tom Hiddleston. Loki looks dapper as hell in his sunglasses and a perfectly-tailored suit, not long after Mobius brought up his uncanny ability to do awful things and just get away. “What can I say, I’m a mischievous scamp,” Loki says.

The cutaway scene, which is only about two minutes long, also holds a bit of Catch Me If You Can feel to it as well. Loki, getting a drink brought to him as “Mr. Cooper,” hands a note to the flight attendant, smiles, before telling her that she should probably read that note. “I have a bomb,” he says.

The next cutaway (which Mobius delightfully calls “the best part”) finds Loki with a suitcase full of money and flirting with the flight attendant (“I’ll see you again someday,” he says, winking)aboard the cleared out plane, getting ready to parachute out mid-air. “Brother, Heimdall… You better be ready,” he says, before jumping from the flying plane and getting zapped back to Asgard via the bifrost. 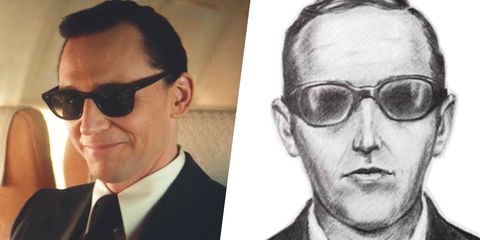 Who was D.B. Cooper actually?

“I can’t believe you were D.B. Cooper,” Mobius tells Loki after the fun flashback sequence. And, honestly, Loki being D.B. Cooper’s true identity would make about as much sense as any answer we’ve ever gotten on this real-life mystery/tale.

Most notably? The fact that the real D.B. Cooper—who did hijack a commercial airline flight, and who did collect more than $200,000 in ransom, and who did jump mid-air from a plane—would likely not have survived a high-risk jump from that distance up in the sky. Yet, a body was never found, and very few answers around the case exist, period. So, if you want to tell yourself that he really was Loki Laufeyson, well, you probably aren’t any further off than anyone else.

And for what it’s worth? Hiddleston is on board with the theory too. “It was really fun,” he said in an interview with Decider. “And as far as I’m aware, we still haven’t tracked D.B. Cooper down, so….” 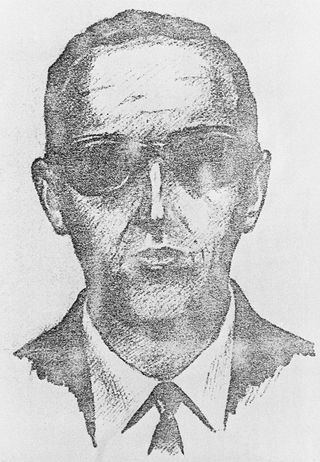 As the full story goes, a passenger named Dan Cooper boarded a Boeing 727 aircraft on November 24, 1971. The flight, which took off from the Portland International Airport, was only supposed to be a 30-minute flight north, heading for Seattle-Tacoma Airport. Cooper, who was said to be a white man in his mid-40s in a suit with a black tie and white shirt, had a black suitcase next to him on board, and ordered one drink—a bourbon and soda. All of this is depicted in the Loki scene, so safe to say the powers behind the show did their homework.

In fact, the line that Loki gives the flight attendant—”Ma’am, you’d better take a look at that note. I have a bomb.”—is what Cooper actually said onboard the plane.

From there is the part that Loki skipped through a little bit. No one knows for sure what the note really said (since Cooper took it back after the attendant read it), but it did say something about a bomb, and instructed her to sit in the open seat next to him. He then opened the case for her (upon her request) enough to see the infrastructure of a bomb inside, and gave her his instructions/demands. He wanted $200,000 in cash, four parachutes, and a fuel tank to fill the plane back up when they stopped at Seattle (to both retrieve the money and allow the passengers to exit). She went to the cockpit to deliver these instructions, and when she returned, Cooper was wearing dark sunglasses he’s best known for (and that Hiddleston wears in the show scene). Fun bet, Heimdall and Thor!

After letting the passengers off at Seattle, the flight took back off with only Cooper, a pilot, a co-pilot, a flight engineer, and a flight attendant on board. It’s not known when, exactly Cooper (who is only known as DB instead of Dan due to a news miscommunication) jumped from the plane; it took off again at 7:40 that night, and by the time it was landed, at 10:15, he was no longer aboard.

Through the years, numerous suspects and leads were pursued, but there was never any definitive evidence that led to the case being closed. The FBI’s case file eventually reached more than 60 volumes, but, again—there was never a definitive answer.

In July 2016, after 45 years of looking for the truth behind the D.B. Cooper hijacking, the FBI announced that it would no longer be actively investigating the case.

If you’re interested in learning more—or maybe we should say diving deeper down the rabbit hole—a 2020 HBO documentary explored this very subject. The Mystery of D.B. Cooper looked at four different individuals whose families and friends believed them to be the D.B. Cooper.

But guess what—it can’t be all of them. And we’ll almost certainly never know for sure. So if you want to go on believing that D.B. Cooper was, in fact, Loki, you’re welcome to do so.