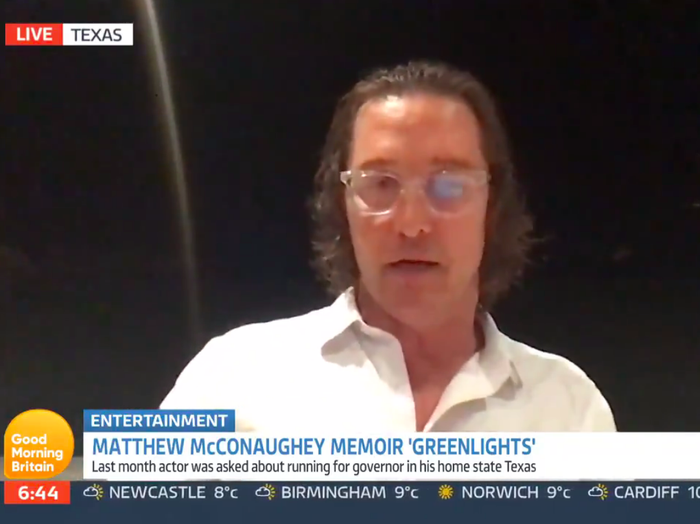 Matthew McConaughey has doubled down on his recent comments about the "illiberal left" during an appearance on ITV's "Good Morning Britain" with Piers Morgan on Tuesday.

The "Dallas Buyers Club" actor who faced backlash earlier this month for his political commentary defended his position and expressed his concern over the future direction of public debate.

"There are extremes on both sides that I think are unfair that I don't think are the right place to be. The extreme left and the extreme right completely illegitimize the other side or they exaggerate that side's stance into an irrational state and that's not fair when either side does that."

McConaughey later continued: "Where the waterline's gonna land on this freedom of speech and what we allow and what we don't on this cancel culture goes is a very interesting place that we're engaged in right now as a society trying to figure out because we haven't found the right spot."

McConaughey made similar comments earlier this month during an appearance on Russell Brand's podcast "Under the Skin." The pair were talking about the state of American politics when the "True Detective" actor accused liberal voters of "patronizing" Trump supporters.

"There are a lot [of people] on that illiberal left that absolutely condescend, patronize, and are arrogant towards that other 50%," McConaughey said when asked about people's response to the 2020 election. He continued to say that it was this same attitude that left some liberals "in absolute denial" over Donald Trump's 2016 victory.

McConaughey was quickly criticized for these comments on Twitter with people say the actor was being equally condescending to liberals and his views were a result of his own "white male privilege."

Last month during a radio interview, McConaughey appeared to suggest that he is considering a run for political office in the future. "I mean, that wouldn't be up to me. It would be up to the people more than it would me," McConaughey said when asked whether he might stand as a political candidate.