Met Gala 2019: Stars arrive for the most outrageous red carpet yet

Met Gala 2019: Lady Gaga arrives in flamboyant style for the most outrageous red carpet yet as guests embrace the ‘camp’ theme

The brightest stars in fashion and Hollywood collide Monday at the Met Gala, the biggest party of the year thrown by the venerable Metropolitan Museum of Art in New York.

And Lady Gaga was determined to make an entrance – turning her red carpet arrival into an outrageous and over the top strip tease.

She embraced the ‘Notes on Camp’ theme in all its glory in a costume designed by her former stylist Brandon Maxwell.

The Met Gala is the annual fundraiser for the Metropolitan Museum of Art’s Costume Institute and is the most glittery and exclusive event on the New York fashion calendar.

It is famous for attracting luminaries of Hollywood, of fashion, music, sports, TV and the stage for an evening of fashion and charity to mark the museum’s spring exhibit.

This year, the exhibit and gala are dedicated to the idea of ‘camp,’ as defined by Susan Sontag’s 1964 essay Notes on ‘Camp.’ 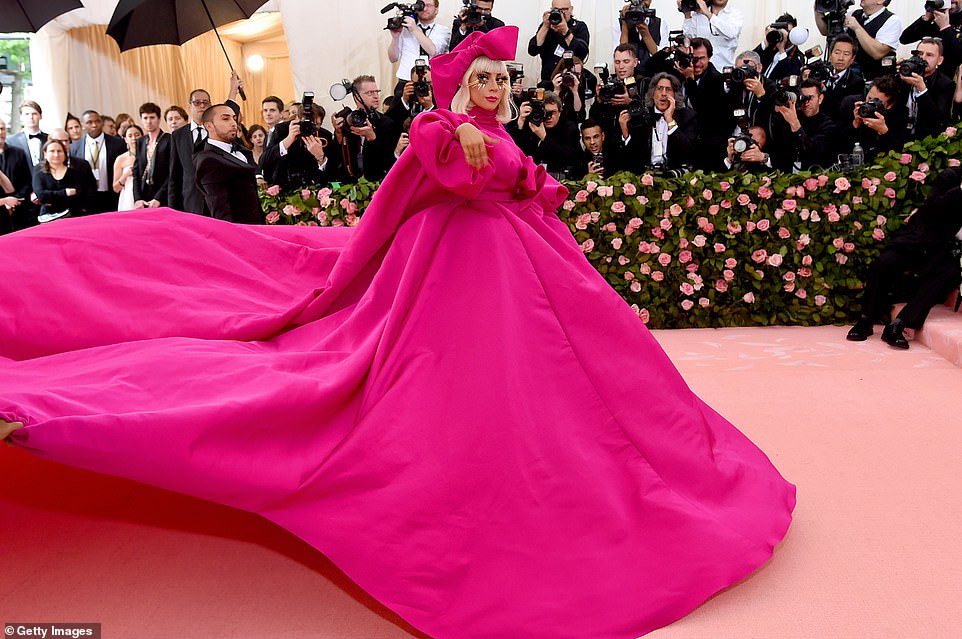 Pretty outrageous in pink: Lady Gaga made a VERY grand entrance at the Met Gala in New York on Monday night. Her incredible outfit was designed by her former stylist Brandon Maxwell 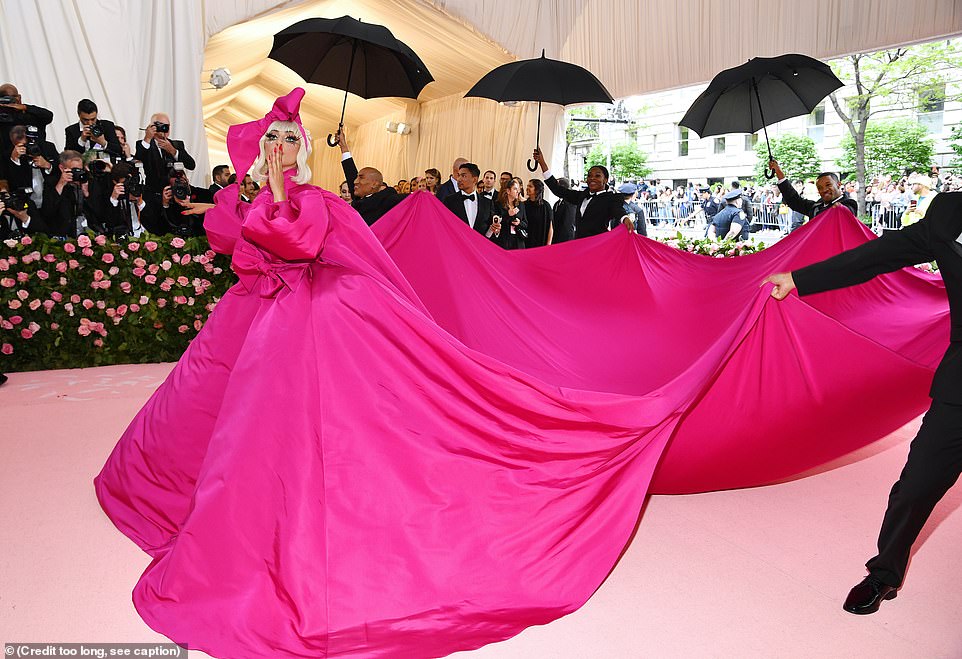 You can’t rain on her parade: She floated down the red carpet surrounded by a men in suits carrying umbrellas 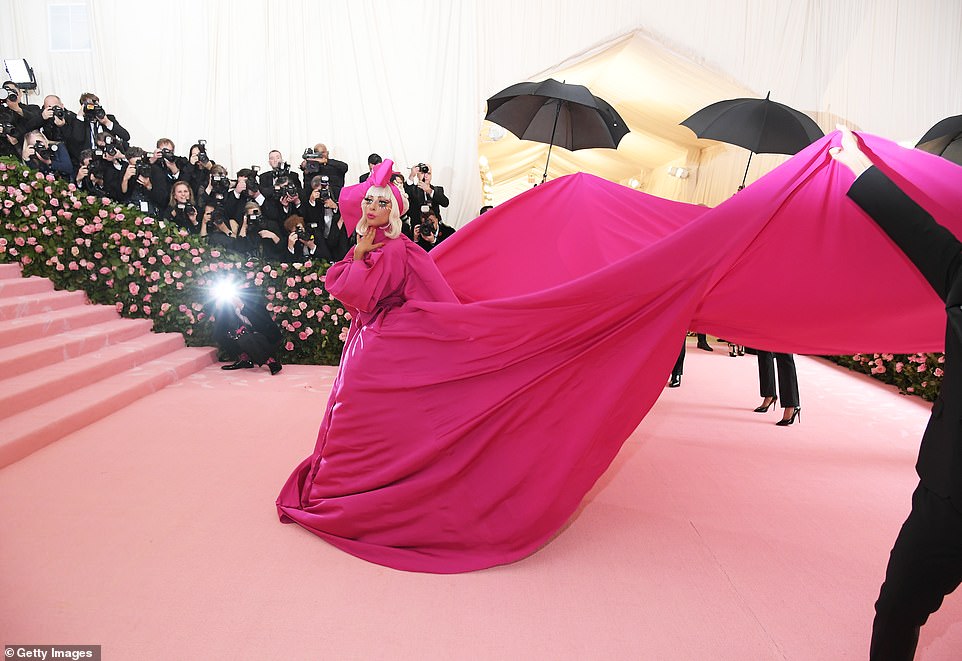 What a performance! The men in suits lifted up her dress up and down like a parachute in a choreographed display. The display seemed to be inspired by 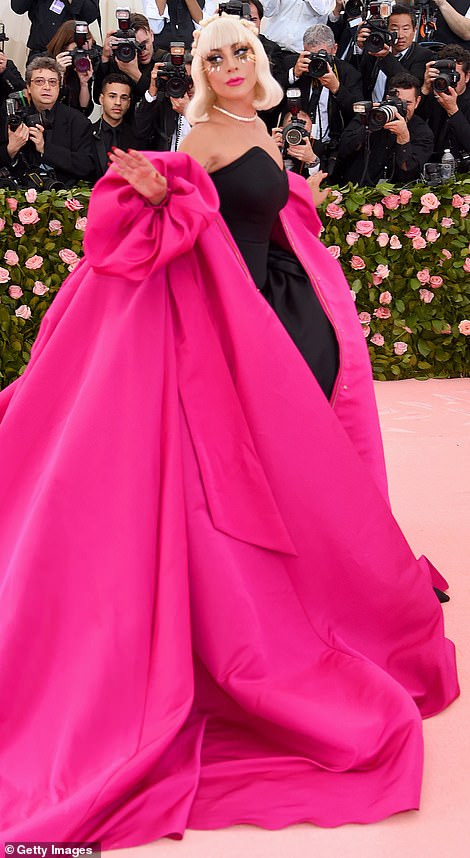 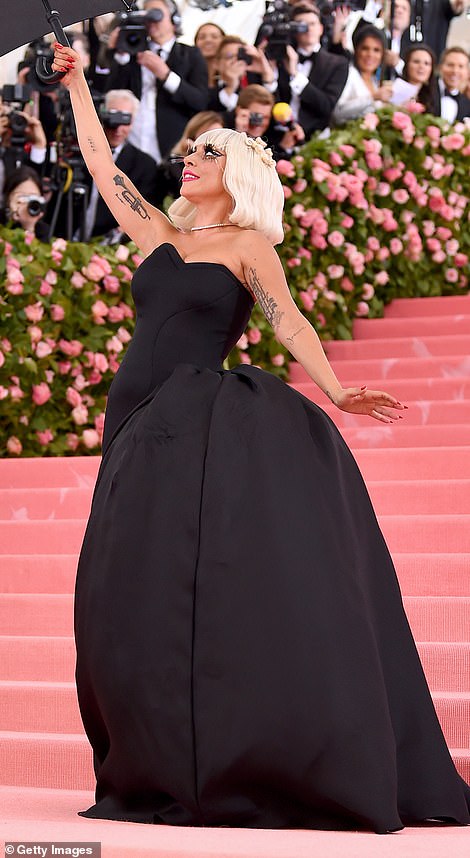 Strip tease: The pop star peeled off her voluminous jacket to reveal a chic black gown

Another reveal! Lady Gaga’s transformation continued as she peeled off her black dress to reveal a pink frock 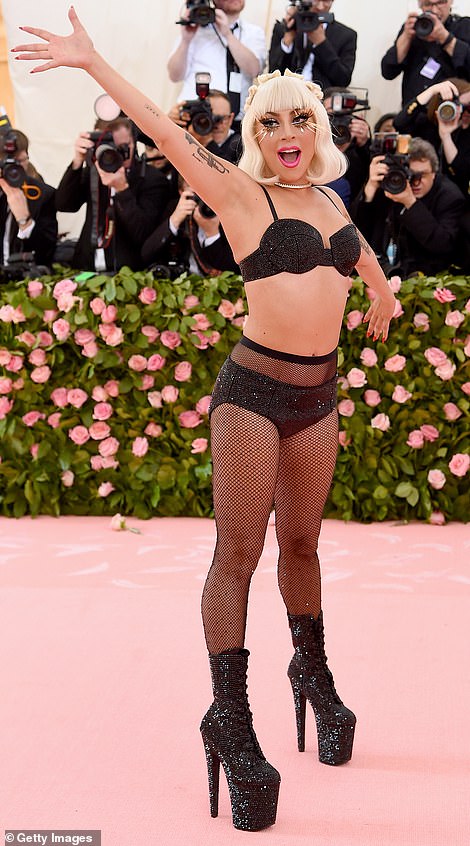 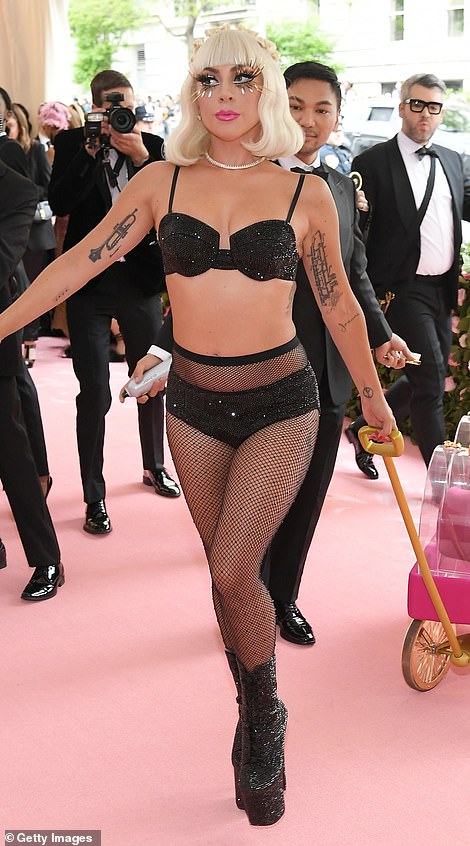 The Met Gala, formally known as the Costume Institute Benefit, is always chaired by a team of high-wattage celebrities, and this year is no exception.

Wintour said she believes this year’s Met Gala to be about ‘self expression’ and ‘individuality’, noting that she wanted to see ‘outrageous, fun, tongue in cheek’ fashion on the red carpet. 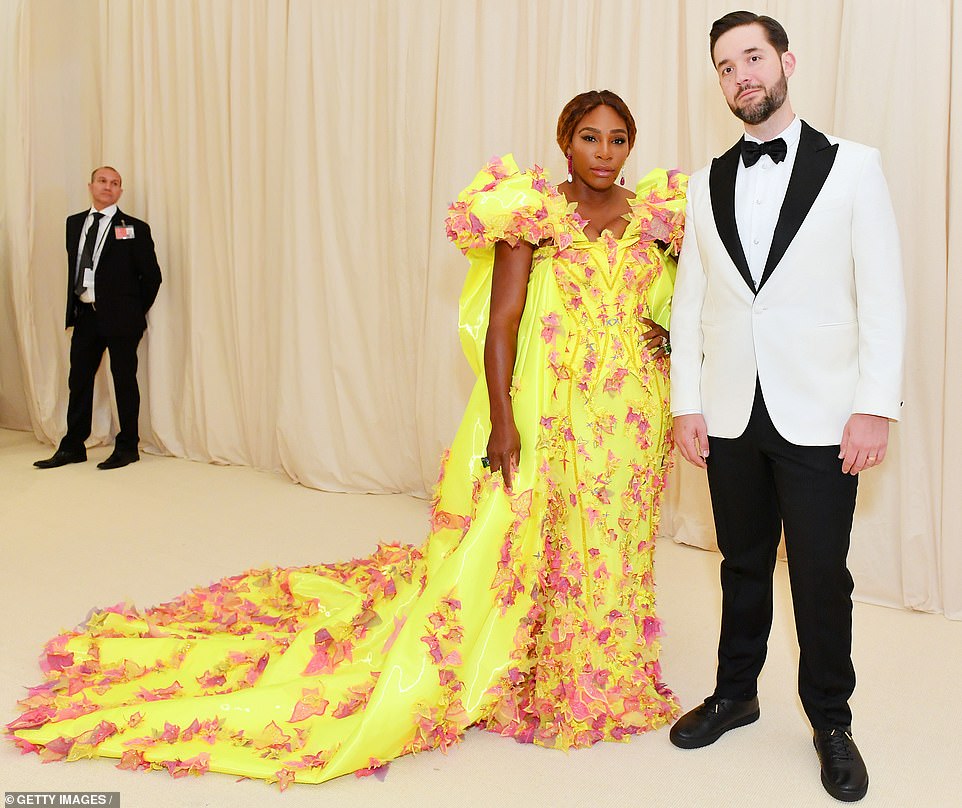 The new theme seems decidedly more lighthearted than last year’s hugely successful Heavenly Bodies: Fashion and the Catholic Imagination, about the relationship between fashion and Catholicism.

That sumptuous, sprawling show drew more visitors than any Costume Institute exhibit — more than 1.3 million to the Met’s main Fifth Avenue location, and nearly 200,000 to its Cloisters branch — and indeed was one of the most attended shows in the museum’s history. 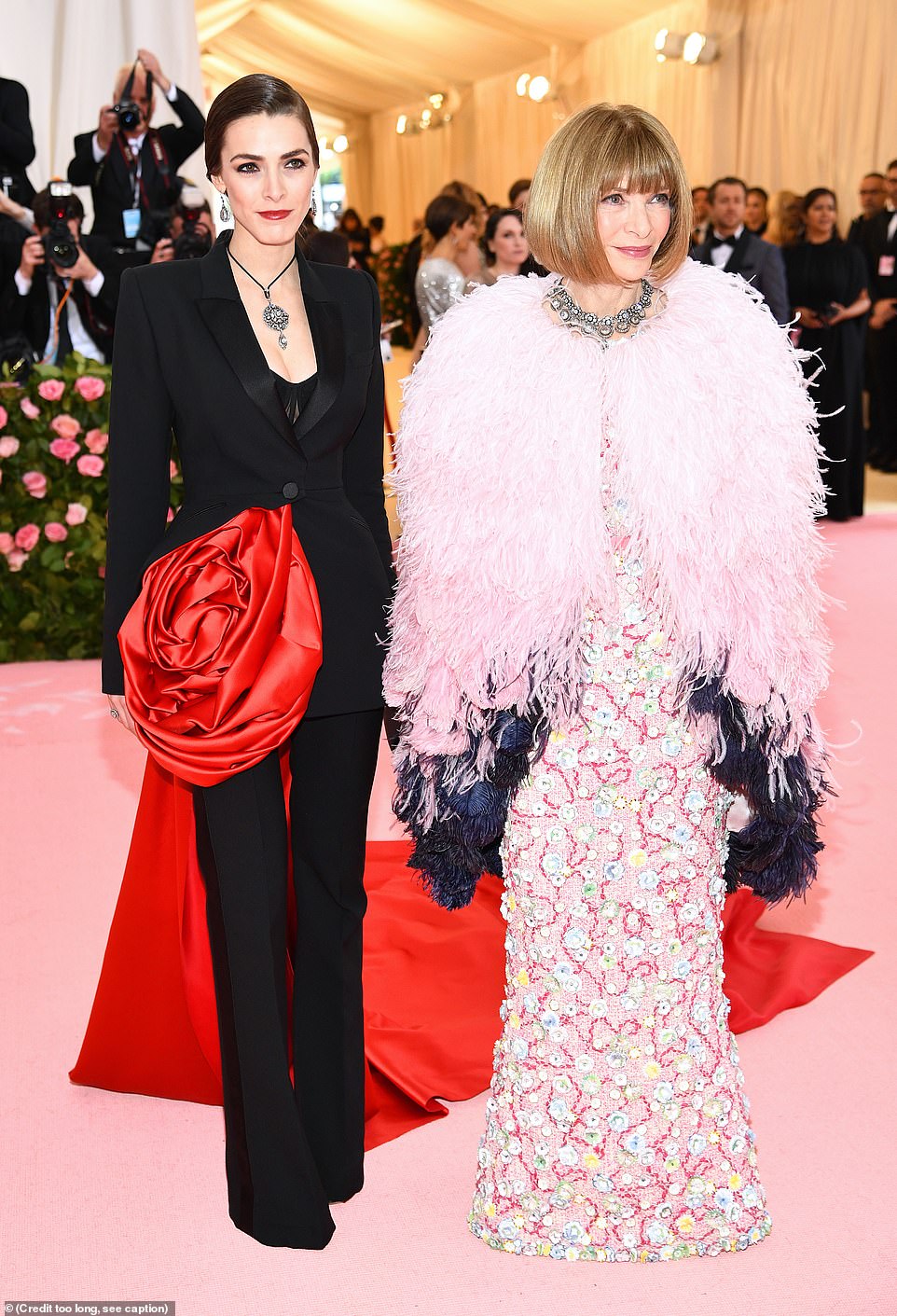 Here we go! Anna Wintour and her daughter Bee were among the first to arrive at the event 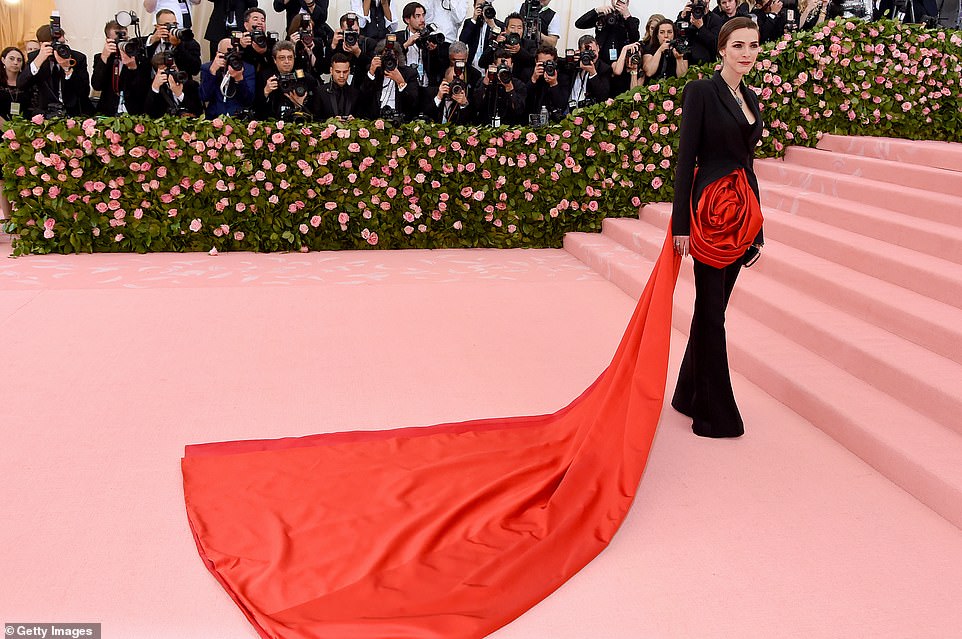 The next generation: Bee Carrozzini made a statement in a rose inspired dress

‘Fashion is the most overt and enduring conduit of the camp aesthetic,’ said Andrew Bolton, curator in charge of the Costume Institute and creator of its blockbuster shows. Bolton said the 2019 show would ‘advance creative and critical dialogue about the ongoing and ever-evolving impact of camp on fashion.’

The exhibit will feature approximately 175 objects, not only clothing but also sculptures, paintings, and drawings.

The Camp: Notes on Fashion exhibit will run from May 9 through Sept. 8. 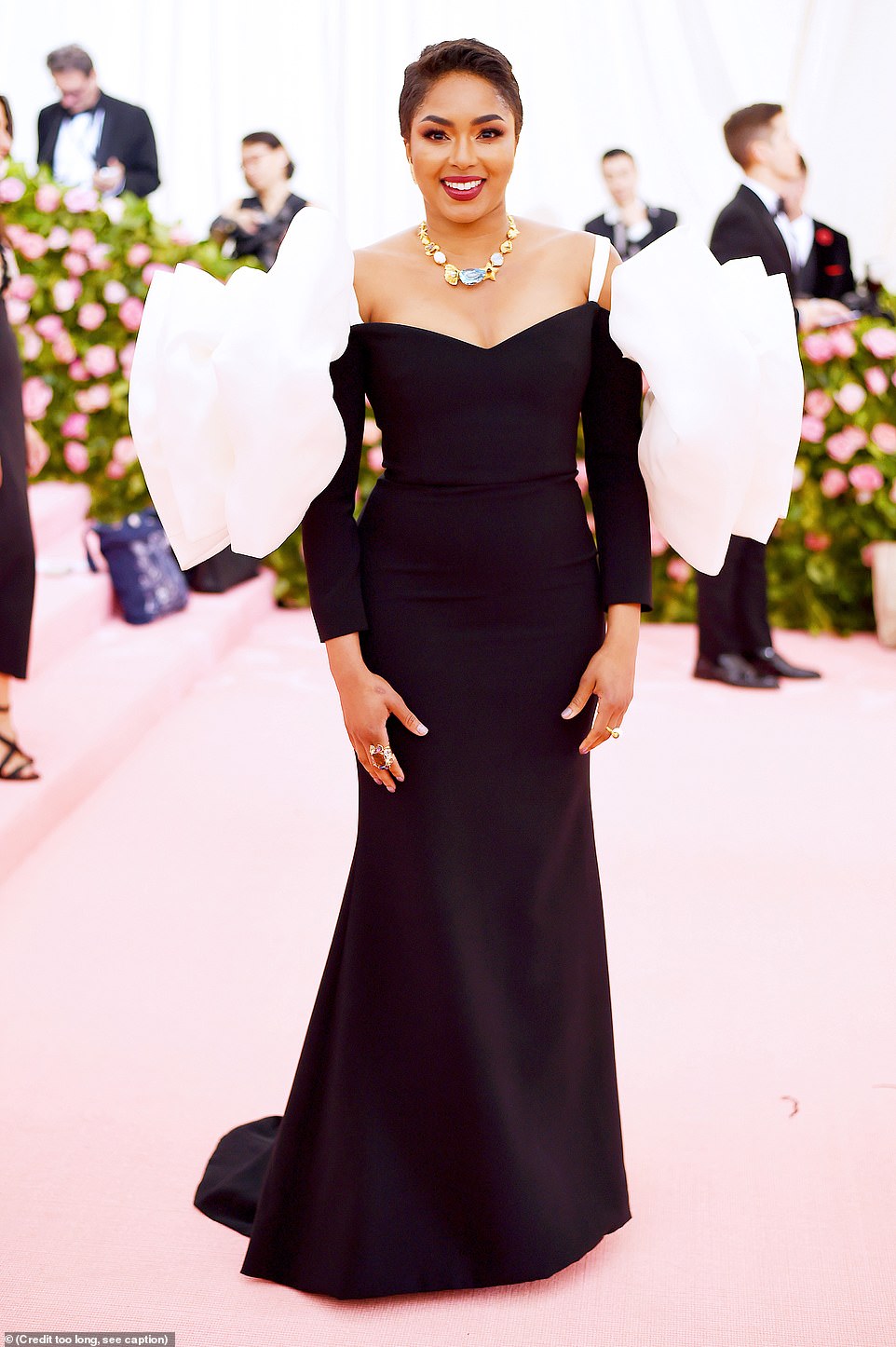 Inside the invite-only Met Gala: Anna Wintour approves the guest list… and stars pay $35,000 per seat

The annual Met Gala extravaganza raises money for the museum’s Costume Institute kicks off the Met’s annual major fashion exhibition — look out, because the theme is ‘camp.’

And the more outrageous the outfit, the better for the Met Gala red carpet, where the A-listers strut their stuff, usually in the most eye-popping ensemble they can find to match the theme.

Last year, Rihanna showed up in full papal-esque regalia, and Madonna wore a regal black gown – with a see-through cross in the bodice – to go along with the ‘Heavenly Bodies’ concept.

Attendance is by invitation only, and word has it that Vogue editor extraordinaire Anna Wintour has the final say over each person on the guest list.

Organizers did reveal a smattering of names last month — members of the so-called ‘host committee’ — and so expect to see Jennifer Lopez, Bradley Cooper, Katy Perry and Priyanka Chopra.

So what exactly is ‘camp’?

The museum’s exhibition is based on ‘Notes on Camp,’ an essay written in 1964 by American author Susan Sontag.

‘Camp is by nature subversive (…) confronting and challenging the status quo,’ the Costume Institute’s head curator Andrew Bolton said Monday at a press event about the exhibition before the gala.

‘In the end, the purpose of camp is to put a smile on our faces and a warm glow in our hearts.’

Some of the items in the exhibition might best explain the theme: the ‘swan dress’ worn by Bjork to the Oscars, a glittering costume worn by flamboyant US singer Liberace, a shower head necklace designed by the late Karl Lagerfeld for Chloe in the 1980s.

‘We’re experiencing a resurgence of camp — not just in fashion, but in culture in general,’ said Bolton.

‘Camp tends to come to the fore in moments of social and political instability. The 1960s was one such moment as were the 1980s.’

The exhibition ‘Camp: Notes on Fashion’ — a play on the title of Sontag’s essay — formally opens at the Met on Thursday and runs through September 8.

Adele Doubles Down On Decision To Cancel Her Las Vegas Residency: It Was 'Not Good Enough'