Home » Michelle Obama Admits She & Barack ‘Can’t Get A Word In Edgewise’ With Sasha & Malia: We ‘Like’ That

Michelle and Barack Obama have raised two opinionated young women, and they love it! The former FLOTUS said that they ‘can’t get a word in’ during dinner with Sasha and Malia.

It’s loud in the Obama household, and that’s just the way they like it! Former First Lady Michelle Obama told Robin Roberts in a new interview that she has always wanted daughters Sasha and Malia to know how powerful they are, and to recognize the importance of their opinions even as kids. Now, they’re both bright young women who are excelling in college and have no qualms about chatting at the dinner table during lockdown.

“What I hope they learn from [my story] is that who they are right now is enough,” Michelle said during her March 3 Good Morning America interview. “I always wanted them to start practicing the power of their voices early on. Look, if you sit around the dinner table, me and Barack can’t get a word in edgewise. And we like it like that. We like their thoughts and opinions.”

Michelle was promoting the new version of Becoming, her 2018 memoir, which has been adapted for young readers. Becoming, which chronicled Michelle’s youth, law career, marriage, and the White House, was the bestselling book of the year — just 15 days after publication. As of late 2020, the memoir has sold 14 million copies worldwide. On her book tour, she shared tons of stories about her daughters, now 19 and 22, growing up in the White House, like how they both had their first kisses there. 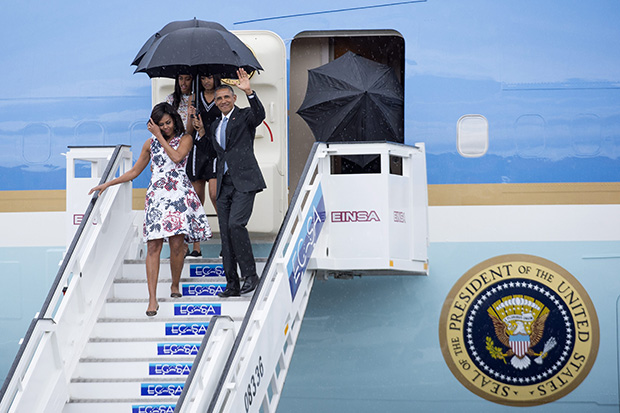 Geez, mom. Former President Barack echoed Michelle’s point about their opinionated daughters during a November 2020 interview while promoting his memoir, A Promised Land. He joked that he was “scared” of Sasha, who takes after Michelle. “I’m afraid of Michelle and Sasha, having seen that, basically has the same look and same attitude,” he said.