The ‘Anaconda’ hitmaker shares on her Instagram account a picture of her old mugshots from 2003 when she was arrested for weapons possession, though she then deletes the post.

AceShowbiz –Nicki Minaj made use her social media account to reflect on her life prior to becoming hip-hop superstar. On Monday, May 17, the “Anaconda” hitmaker shared on her Instagram account a picture of her old mugshots from 2003 when she was arrested for weapons possession.

“It took me years to be able to look at things like this,” Nicki wrote in the caption of the now-deleted post which featured two mugshots of a 20-year-old Nicki under her government name, Onika Maraj. “Criminal possession with the intent to use. I did use it tho. This is so inspiring to look back.”

She went on recalling, “The girl was leaking blood and spent days in the hospital. The word on the street was that I was gonna b deported. I was so scared. LOL. I was ‘on the run.’ I rlly thought I was in a ghetto movie. I hid my car and went to stay with my Aunt in Brooklyn chile. Bwahahahaaaa. #Growth.” 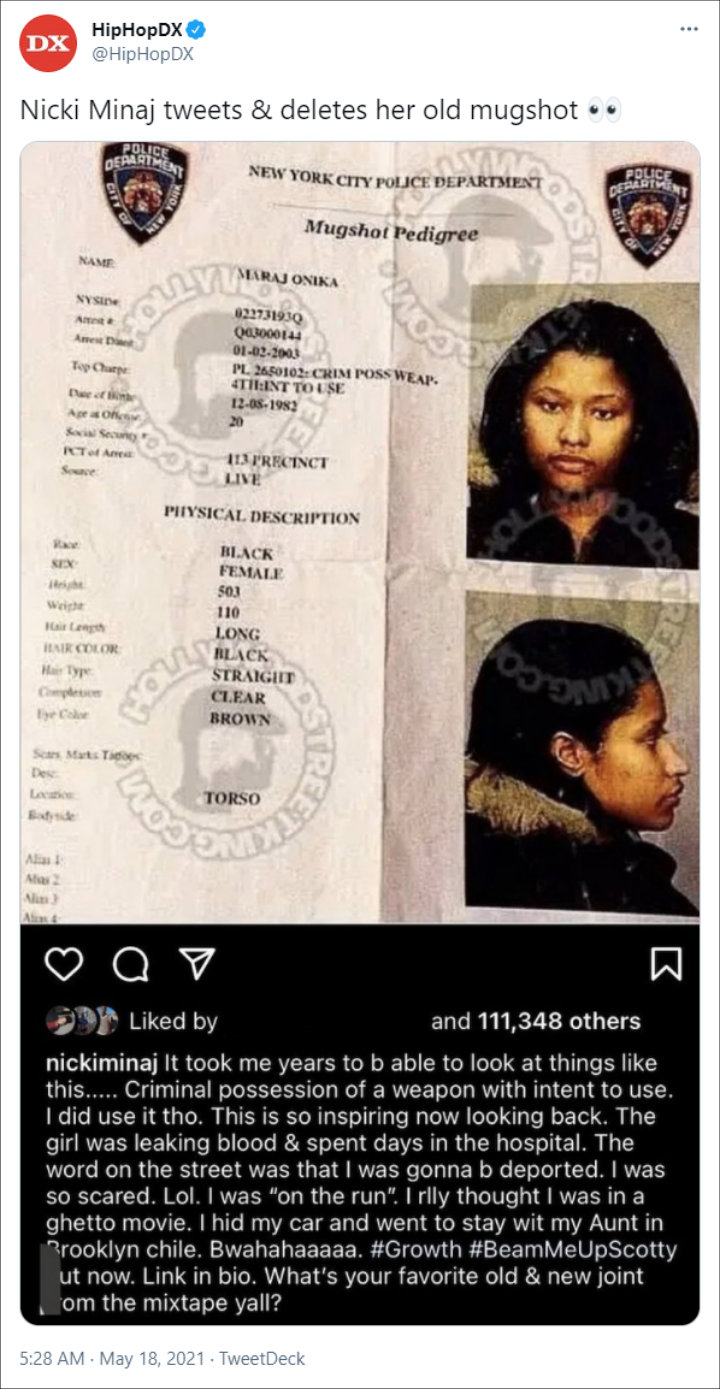 In response to the post, fans were not impressed. “Why would she post about shooting someone and them bleeding out…then lol that’s not growth,” one user questioned. Another person asked, “Why she tryna show she hood all of a sudden,” while someone accused her of “trying for attention lately.”

“This is embarrassing which is why she deleted it. Shes nearly 40. Who still boasts about things they did in their teens or 20’s. Embarrassing,” another person added. “I love her but baby this ain’t it. We want you to keep posting music and we will be happy,” someone commented.

A comment, meanwhile, read, “Why she bragging about having a girl leaking…. she act like a teenager . I definitely believe she’s been threatening her husband’s victim now.” The person is referring to the allegations that Nicki and her associates harassed an alleged victim of of Nicki’s husband Kenneth Petty, who was arrested for failing to register as a sex offender.

Back in March, Jennifer claimed that she was often approached by people who were associated with the Trinidadian star. One of them gave her number to Nicki who later called her. According to Jennifer, the raptress offered to fly her to Los Angeles or Atlanta. One person even contacted Jennifer’s cousin in North Carolina, offering $500,000 for Jennifer to speak with Kenneth’s lawyer. In another occasion, Jennifer was offered $20,000 in cash by a man if she agreed to sign a letter that she lied about her assault. Jennifer said that she rejected all offers.