SEBASTIAN SHAKESPEARE: Ian ‘Beefy’ Botham is caught out over rules at the other Lords

He joined the House of Lords just last year, but cricket legend Ian Botham has already been caught out by the rules on declaring business interests.

The peer has been told to apologise for not registering his personal services company, from which he and his wife, Kath, have taken a loan of almost £200,000.

‘Beefy’, as Baron Botham is affectionately known, was found to be on a sticky wicket after a charity researcher, Alex May, bowled him a googly in March. 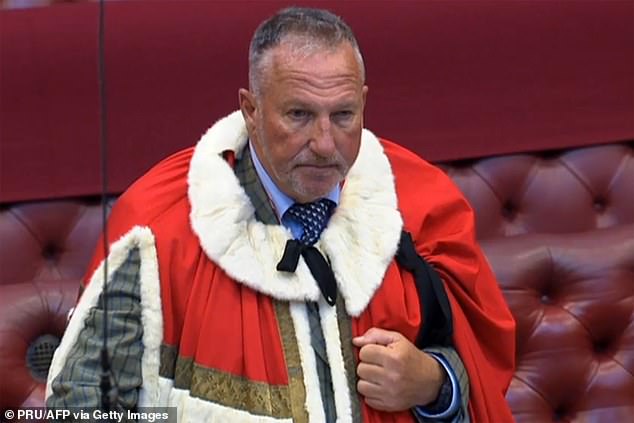 Pictured: Ian Botham has been told to apologise for not registering his personal services company, from which he and his wife, Kath, have taken a loan of almost £200,000

He claimed the loan should have been considered a form of remuneration that Botham recorded in the Register of Lords’ Interests.

An investigation was launched by the Commissioner for Standards at the House of Lords, who has now published a report, spelling out that the Bothams took a loan of £197,329 from their company, Newschoice Ltd.

Beefy apologised to the Commissioner, explaining that he ‘did not realise that a director’s loan was seen as a benefit in kind’.

The Commissioner concludes that Botham did breach the Code of Conduct, but says it was ‘minor and inadvertent’.

Beefy has written a letter of explanation to the Conduct Committee’s chairman, Lord Mance, saying he was ‘unaware that an outstanding director’s loan should be deemed as a remunerated directorship as at present’, and that, for the past year, ‘no income has been derived from this limited company’. 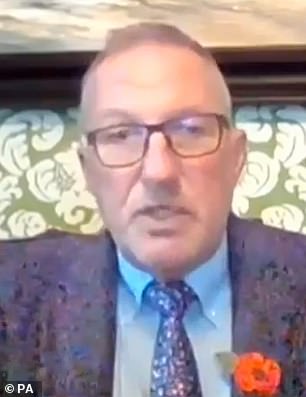 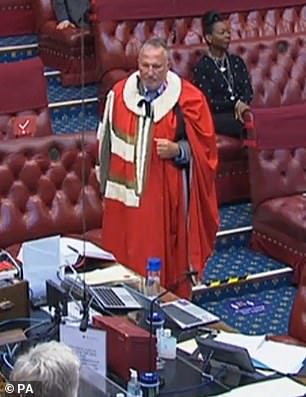 It’s not the first difficult ball from May that Botham has had to deal with. In January, he complained that Botham had plugged a brand of pork pie sent to him as a gift.

And in 2018, May reported that a charity established by Botham spent nothing on charitable activities in the previous year, but handed as much as £94,000 to a company run by his daughter, Sarah.

The foundation said it expected to make further grants to the charities it was supporting the next year.

With all her success, Dame Helen Mirren still regrets that she has not been able to travel the world to exotic holiday destinations, as she has been too busy with her career.

Dame Helen, 75, says: ‘I really want to go to India and Indonesia. I’ve missed out on lots of adventures because I’ve been working my whole life.’ 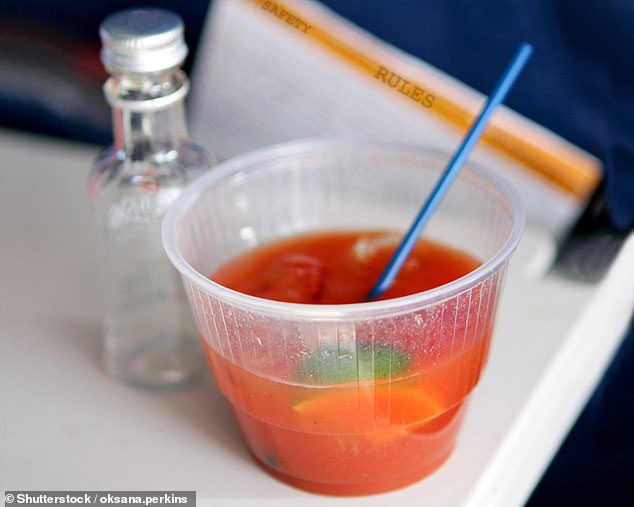 Designer Matthew Williamson, who has dressed the Duchess of Cambridge, is not afraid to show his true colours when faced with difficult cabin crew.

‘On one flight, I asked for a Bloody Mary. The lady looked at me like it was a bizarre request,’ recalls the Mancunian, 49. ‘Have I said it weirdly? Is it my accent?

‘She said: “You’re a problem, and you’re asking for a problem drink.” So she dumps down a tray with 15 condiments: a do-it-yourself Blood Mary. I was livid.

‘In the end, the CSD [Cabin Service Director] came out, made me my drink, and asked: “Would you like to come further up the plane?” And she moved me up a cabin to apologise.’

Donna and Joanna following the herd

Actress Donna Air was not afraid to mention the elephant in the room when she met up with Absolutely Fabulous star Joanna Lumley at the weekend.

The exotically dressed duo were celebrating the launch of the environmental campaign, CoExistence, with a herd of life-size elephant sculptures in front of Buckingham Palace to promote the co-existence of humans and animals. 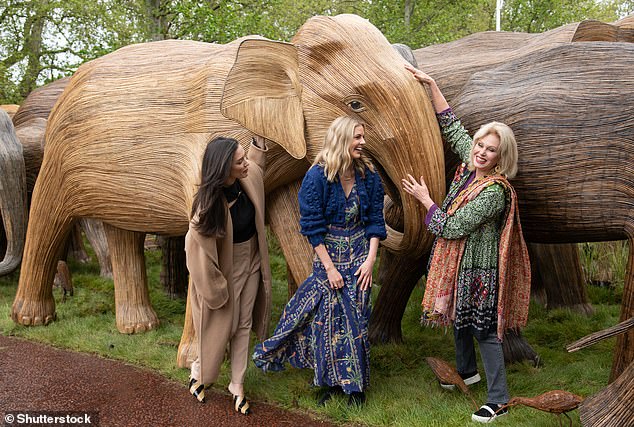 Donna Air, Amy Jackson and Joanna Lumley at the launch of the CoExistence campaign

‘I am a proud patron of this incredible project,’ says Donna, 41, who, with Lumley, 75, posed with the sculptures provided by The Elephant Family — a charity set up by the Duchess of Cornwall’s late brother, Mark Shand.

‘This 100-strong herd reminds us that when we lighten our footprint, wildlife bounces back.’

Sir Rod Stewart’s youngest daughter, Renee, is nursing a broken heart after the death of Jagger, her beloved rescue chihuahua and ‘best friend’ of 13 years.

‘This is one of the hardest things I have had to go through. The grief and loss I’m feeling is indescribable,’ the 28-year-old writes in tribute.

‘But you are no longer in pain and you passed peacefully in my arms.’

The London-based dancer, whose mother is former supermodel Rachel Hunter, admits that when she acquired the rescue dog, she had to explain to her father that she didn’t choose Jagger as his name — the pooch just happened to have the same moniker as Rod’s rock rival . . . 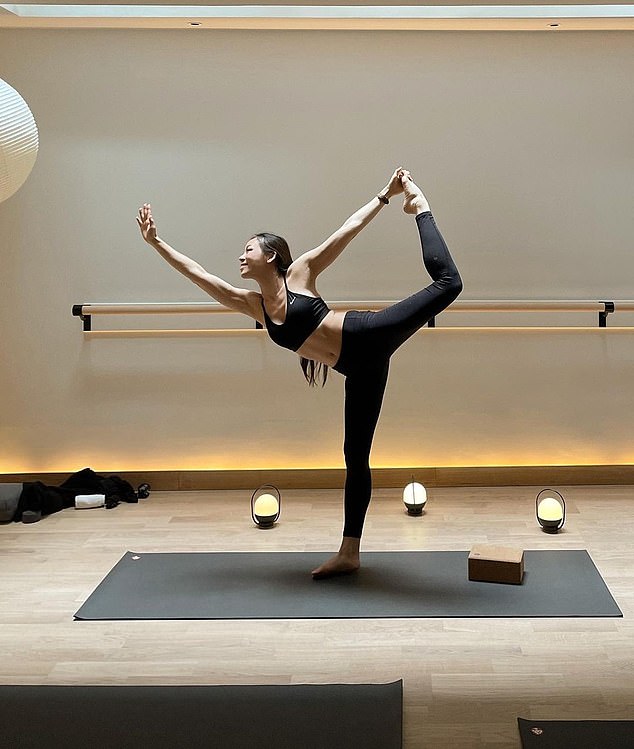 Now Dara can stretch her legs after lockdown

Glamorous architect Dara Huang, who was engaged to marry Princess Beatrice’s husband, Edoardo Mapelli Mozzi, before he fell for Prince Andrew’s daughter, is flexing her muscles to get back into the swing of society as Covid restrictions ease.

The 38-year-old, who has a four-year-old son, Wolfie, with property developer Edo, was delighted to return to her Mayfair yoga studio this week where she demonstrated the dancer’s pose, which strengthens legs and thighs. 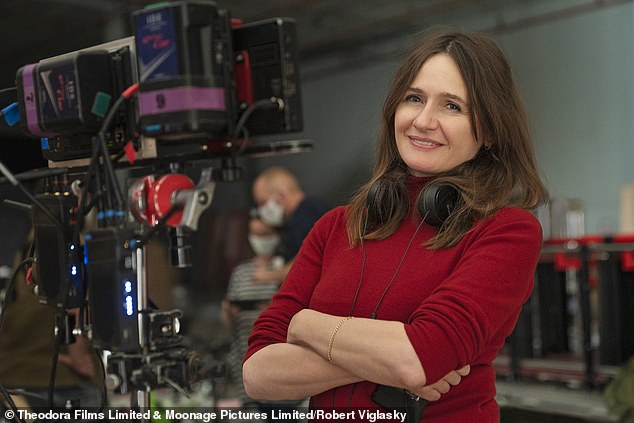 After directing The Pursuit of Love for the BBC adaptation, Emily Mortimer has said she wants to make a film in Russia because she has spent a lot of time there and thinks its underexplored

Fresh from her directorial debut with the BBC TV adaptation of Nancy Mitford’s The Pursuit Of Love, Emily Mortimer wants to make a film in Russia.

‘I want to make a feature film next,’ says the daughter of Sir John Mortimer who read Russian and English Lit at Oxford University and spent her gap year in the country where she fell in love with a poet called Dennis.

‘I’ve got one I want to do about Russia because I spent a lot of time there and I think it’s a much underexplored culture and place.’

Amber Le Bon and her panic on the catwalk

Despite having famous parents, model Amber Le Bon — daughter of Duran Duran’s Simon and model Yasmin — admits life in the spotlight doesn’t come easy to her.

‘I live in a constant state of fear. When it kicks in, I have mind blanks,’ says the 31-year-old. 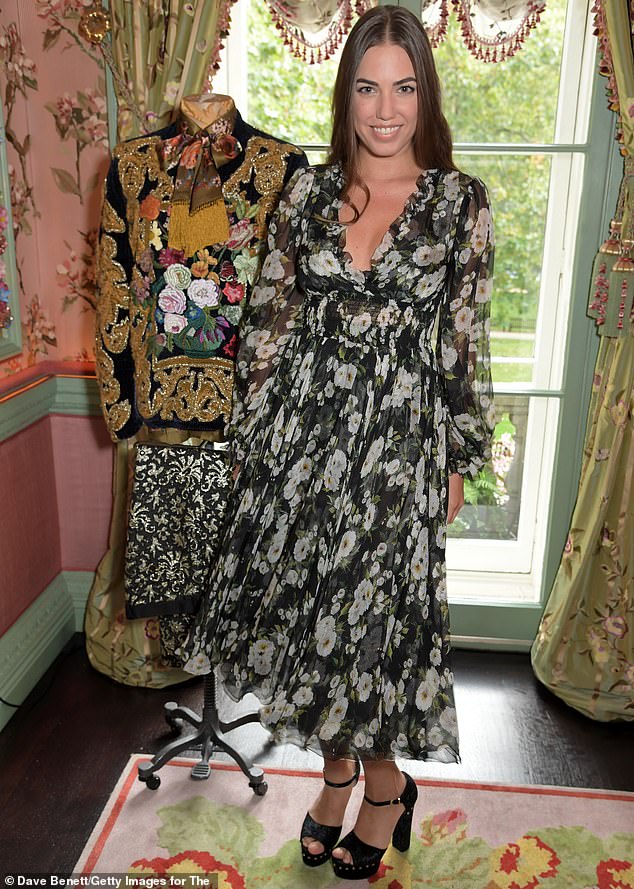 Pictured: Amber Le Bon — daughter of Duran Duran’s Simon and model Yasmin — admits life in the spotlight doesn’t come easy to her and that she lives in a ‘constant state of fear’

‘I used to get it during a fashion show. I’d walk, and the next thing I’d remember was walking back in.

‘I don’t actually remember being on the runway at all.’

She adds: ‘I also get terrible panic attacks. I was once at an Amanda Wakeley event when suddenly I felt constricted — my it wasn’t working!’