So, Meghan Was *Not Happy* About the 'Vanity Fair' Cover That Confirmed Her Relationship With Harry

If you prefer your royal tea aged like a fine wine, you’re in luck because a new biography is delving into some vintage royal gossip. The book, Revenge: Meghan, Harry and the war between the Windsors, by British journalist Tom Bower, details some of the drama that apparently went down behind the scenes when news *officially* broke that Prince Harry and Meghan Markle were a serious thing (spoiler alert—Meghan was reportedly *super* upset about how it went down).

In case you need a refresher, even though the royal-obsessed world was already aware of Harry and Meghan’s love connection, the ‘ship got its real, official confirmation in the fall of 2017, when Meghan appeared on the cover of the September issue of Vanity Fair with the headline, “She’s Just Wild About Harry.” 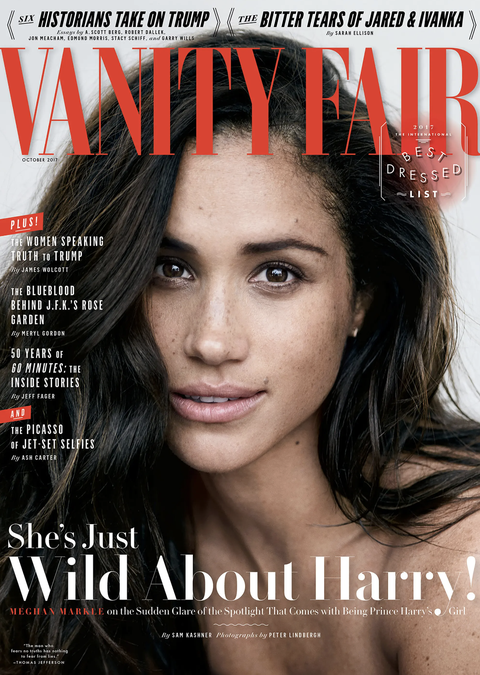 Meghan was asked about Harry in the interview and was quoted as saying, “We’re a couple. We’re in love,” but was apparently not happy when the comments were used in the article. According to Bower, she was pretty furious that her PR team didn’t make Vanity Fair remove the mention of her relationship with Harry

“She complained because she wasn’t presented in the way she wanted… She demanded that the media do what she expects,” Sam Kashner, the interviewer for the article, apparently told Bower, according to excerpts from the book published by The Times of London. “I felt manipulated.”

“Unlike the other young women who married the Windsors it seemed Meghan would not remain silent,” Bower writes in Revenge. “In London, Harry’s family and their advisers were subdued. This was not an issue, as some would later assert, about the Palace’s handling or mismanagement of Meghan. Nothing could be done. The besotted prince ignored the warnings that Meghan spelled trouble for the Palace.”

The Times of London excerpts also include claims that Meghan was upset that the cover story didn’t include the now-famous anecdote about her childhood letter writing campaign against a sexist dish soap ad (which Bower says the magazine cut because its fact checkers couldn’t verify the story) and that former Vanity Fair editor told Meghan’s team flat out that she “didn’t get the cover in her own name… but because of who she was likely to marry.”