Some ‘Game Of Thrones’ Fans Think Jon Snow Gets Credit For Saving The Day!

Sunday night’s action-packed episode of Game Of Thrones was one for the ages, and will probably hold the record for most expensive episode of television ever made for YEARS.

Unfortunately it’s also proving to be one of the most controversial.

Despite the epic fantasy action and crowd-pleasing moments of heroism, many have found something to complain about.

In the case of a few critics, the evil Night King being defeated felt too convenient or traditional — unlike the unforgiving early seasons of the HBO hit.

Unfortunately there is also a contingent who are upset that — OH NO! — a girl defeated the villain and saved the day.

In the final moments of the Battle of Winterfell, it seems all is lost, and the Night King is about to kill Bran, the Three-Eyed Raven.

Jon Snow, the valiant hero with the tragic backstory, can’t get there to stop it. All our heroes are barely standing against the army of the dead, let alone in a position to help.

That’s when Arya Stark, the tiny water dancer/trained assassin leaps in out of nowhere and pounces on the Night King, stabbing him with the Valyrian steel dagger Bran gave her in that very spot the previous season.

The surprise ending had most fans going wild with pure elation. Don’t believe us? Just watch.

For a small but vocal minority of man babies, the fact it was Arya and not Jon who pulled off the killing blow is an affront to their fragile masculinity.

We don’t want to say this theory is necessarily part of that movement, but it kiiiiinda feels like it.

At the final moment Jon is pinned down by the ice dragon, he sees Arya going for the Godswood, and THAT’S why he stands up and screams. Not because he’s ready to fight the dragon one-on-one if that’s what it takes — which would have been badass enough frankly. 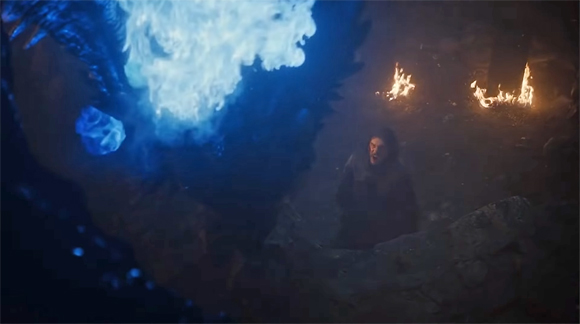 No, this theory is giving him credit for the assist on the kill, saying he is actually screaming “GO!” to Arya, distracting the dragon and giving her the moment she needs to sneak up on the big bad.

Come on, y’all, you can’t just give Arya the game ball here? For once, really??

Watch the scene again to see if YOU think the theory holds water (below):

It must be said, for some fans this really isn’t about misogyny — it’s about prophecy. Specifically the idea the “Prince Who Was Promised” will defeat the Night King.

For them this explanation keeps Jon in the running for the title, because hey, he helped too.

Those worried about that little detail are forgetting something; it’s not necessarily just about the person who wields the knife. Jon and Daenerys put the team together. They both led the army that defeated the Night King. Just like a basketball coach, they’re going to get credit for the win.

It doesn’t matter if Jon was screaming to give Arya an opening, the whole thing was a team effort. Just think of all the people who saved Arya’s life.

They all did it together. It’s a win for the entire side of the living.

So let Arya have her damn moment already.