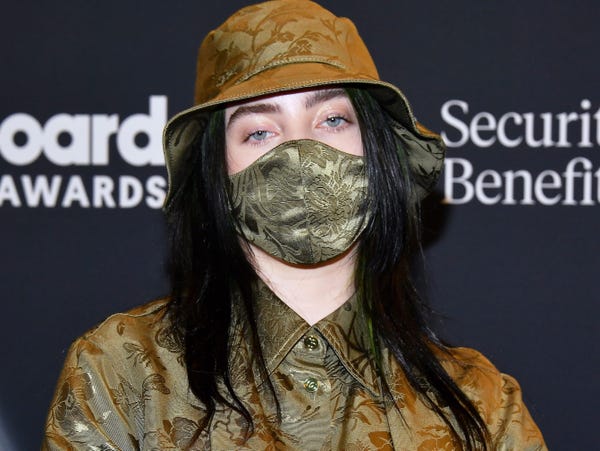 The Trump administration accused Billie Eilish of "destroying" the US in a new series of leaked documents, according to the Washington Post.

On Thursday, the Post reported that the Trump administration had planned to roll out a public health campaign featuring numerous celebrities to help "defeat despair and inspire hope" amid the pandemic.

But, in what appeared to be a move designed to support President Donald Trump ahead of Election Day, a top Trump administration official inserted "partisan political interests" into the $250 million advertising contract by disqualifying certain stars based on their political affiliations.

Per the Post, the documents for the project (obtained by Democratic lawmakers) showed that some stars were ultimately excluded from consideration because they have criticized Trump, publicly supported Barack Obama, or were supportive of gay rights and same-sex marriage.

Eilish, for example, was said to be unfit to participate because she was "not a Trump Supporter."

The documents also reportedly said that the 18-year-old was "destroying our country and everything we care about."

Other stars, including Jennifer Lopez and director Judd Apatow, were also reportedly vetoed due to their past criticisms of the president.

The "Bad Guy" singer has been vocal in her disapproval of Trump.

In August, Eilish performed her latest single during a virtual appearance at the 2020 Democratic National Convention.

Before launching into her rendition of "My Future," however, Eilish gave an impassioned speech decrying Trump and his handling of the coronavirus pandemic.

"You don't need me to tell you things are a mess," Eilish said. "Donald Trump is destroying our country and everything we care about. We need leaders who will solve problems like climate change and COVID, not deny them. Leaders who will fight against systemic racism and inequality."

Eilish continued: "And that starts by voting for someone who understands how much is at stake. Someone who's building a team that shares our values. It starts with voting against Donald Trump and for Joe Biden. Silence is not an option, and we cannot sit this one out."

Eilish pressed the importance of the election and told viewers "to vote like our lives and the world depend on it, because they do."

She concluded: "The only way to be certain of the future is to make it ourselves. Please register. Please vote."

Representatives for Eilish and the Trump administration didn't immediately respond to Insider's requests for comment.