Watch Kris Jenner & Ariana Grande Fangirl Over Each Other on the Thank U, Next Set 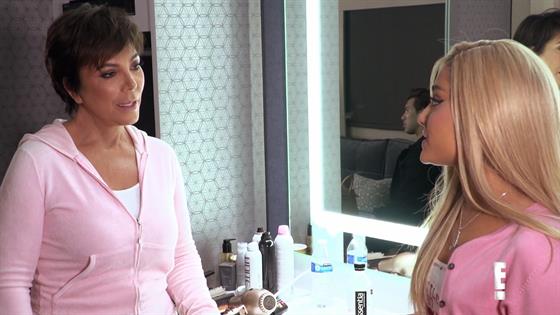 The show must go on!

In this clip from Sunday’s all-new Keeping Up With the Kardashians, Kris Jenner puts aside her concern for the Woolsey Fire in order to star in Ariana Grande‘s “Thank U, Next” music video.

“It’s the day of the shoot and I feel really excited to go make my Ariana Grande video debut,” the famed momager gushes in a confessional.

And it seems that the “7 rings” artist is equally stoked about Kris’ cameo as the hit maker pow-wows with Jenner in her trailer. Not only does the pop star give the Kardashian-Jenner matriarch a big hug, but she also reveals that she’s wearing Kylie Jenner‘s lip kit for the video.

According to Ariana, she “started crying my eyes out” when gifted a box of the popular lip kits. Nonetheless, the chart-topper is happier about Kris joining her team for the “Thank U, Next” visual.

“We’re so excited to have you,” an elated Ariana relays. “I’m so excited, it’s gonna be so funny. I want to show you at some point the other set-ups. We did some Legally Blonde and 13 Going on 30 and…What else? Oh yeah, we’re gonna do Bring It On tonight.”

In order to assure Ariana that she’s “got this,” Kris flaunts some of her dance moves. This inspires Ariana to encourage Kris to “freestyle” and to make the part “your own.”

“Guys, I’m so excited to make my Keeping Up With the Kardashians debut,” the “Breathin” songstress further quips.

As for Kris? She just hopes to not let “iconic” Ariana down as she admires the young superstar “very much.”

Watch Kris and Ariana’s sweet on-set chat for yourself in the clip above!

Watch a brand new episode of Keeping Up With the Kardashians Sunday at 9 p.m., only on E!