Home » Fashion » A Fairy-Tale Ending in Its Own Time

While growing up, Julia Mathis imagined having a fancy wedding with a huge crowd, a string of bridesmaids and a towering cake. Her mother had married her father at the age of 21 and that partnership held solid for 40 years.

Marriage for Ms. Mathis promised stability, and she thought that she would also fall into married life in her early 20s.

Raised in a Christian home, the child of interracial parents — her mother is white and her father African-American — Ms. Mathis, now 40, never quite found her footing in her conservative hometown, University Place, Wash. She excelled in school and sports, but when it came to boys, she was a late bloomer.

Post graduate school, she maintained a long-distance relationship after moving to San Francisco for a job at the University of California San Francisco, where she now serves as a contracts and grants officer for the AIDS Research Institute and the Division of H.I.V., Infectious Disease and Global Medicine. 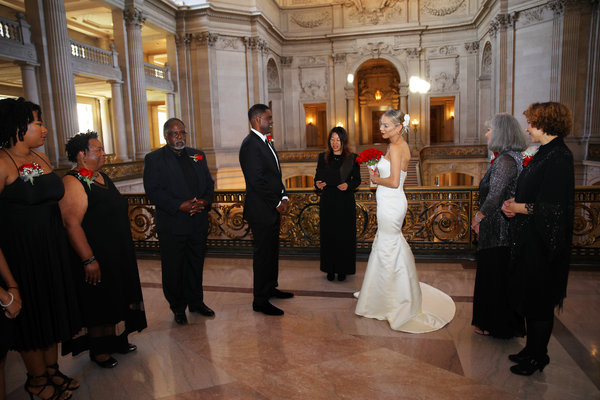 But when that relationship eventually ended, her one-and-done marriage dream went belly-up. “I thought the key to finding love was to be pretty, nice, and successful,” said Ms. Mathis who was by then, by all accounts, all that and more. “But someone truly falling in love with you? That’s something quite different.”

Tender from the breakup, she eschewed serious dating for several years and focused on her career.

For Shon Buford, career was always his main focus. He never imagined a wedding, let alone a fancy one.

From his single mother, Janice Reed-Stutts, a retired senior deputy sheriff for the City and County of San Francisco, his grandmother, and elders at Little Bethany Missionary Baptist Church, which the family attended, he was taught that volunteering was “God’s work” and that service to others was the key to a fulfilling life.

His mother often took him to her courtroom, where “he charmed the judges and just about everyone else,” she said. Having shown leadership promise in high school Mr. Buford earned the nickname “the mayor.”

In 1992, Mr. Buford was attending community college and planning to be a teacher when the opportunity to try for a role in the San Francisco Fire Department arose. From nearly 10,000 applicants, he was one of just 150 hired from that list. At the age of 23, he was sworn in as a firefighter.

Assigned to a rough part of the city not far from where he grew up, he worked alongside mainly white, older men who took the rookie under their wing. At that time, the crack epidemic had turned some streets into battlefields and the first corpse he encountered was a gun shot victim, a young man about his own age. As Mr. Buford and his crew performed CPR on the lifeless body, he had an epiphany.

“If it weren’t for my mother and those that mentored me, that guy could have been me,” said Mr. Buford, now 48.

From then on, he was married to his job. He arrived early to work, stayed late, and gleaned all he could from seasoned veterans. Soft-spoken, with a calm, determined, demeanor, he was both admired and liked by his colleagues, and grew to be a notable mentor for those rising in the ranks behind him. In 2006, he joined the elite rescue team, considered the Navy Seals of the department for which he trained in cliff rescues and became a certified scuba diver.

“I was driven to be best prepared and top in everything,” said Mr. Buford, now an acting captain with the San Francisco Fire Department and the president of Local 798, the firefighter’s labor union. He was the first African-American to hold that union position.

But the job’s commitments and the cumulative effect of seeing so much tragedy weighed heavily on his personal life. In his mid-30s he was engaged, but that relationship ended over a misunderstanding. “In the fire service we never show weakness, I was young and my pride got in the way of working that situation out,” he said.

Work also contributed to the demise of his next relationship, this time with a woman with children. “She said I loved my job and my city more than the family,” Mr. Buford said.

After that split he added yet another element to his already jam-packed schedule. He enrolled at the University of San Francisco. He graduated in 2018 with a degree in management.

Before he died, his stepfather, Carl Stutts, a retired firefighter with the United States Air Force and a Postal Service clerk, had asked him and his family members to promise that they would earn a college degree. (When he enrolled in college, Mr. Buford’s mother was on the path to completing her degree and his stepsister had already completed hers.)

So when he met Ms. Mathis at a charity fund-raiser in 2015, he was deep in study mode. Both of them had so much going on they barely registered on each other’s radar.

The year before Ms. Mathis was in a second relationship and engaged when evidence of an infidelity shattered that three-year relationship. Not long after that, her father, John Mathis, died suddenly while vacationing in Mexico.

“My dad was the only stable man in my life,” Ms. Mathis said. “I was tortured with grief and unable to connect with anyone. It was the worst year ever.”

Always active in philanthropy, she deepened her commitment to the Princess Project, a nonprofit organization that provides prom dresses to underprivileged high school girls, where she served three years as co-president.

In 2017, Ms. Mathis and Mr. Buford crossed paths at a restaurant. They remembered meeting previously, but by this time Ms. Mathis’s grief had abated and she immediately took inventory of Mr. Buford’s youthful good looks, stunning eyes (brown ringed with blue), his impressive height of 6 foot 2, and the absence of a wedding ring.

Mr. Buford noted Ms. Mathis’s exuberant personality, radiant beauty and kind smile. He boldly asked for her phone number. A first date soon led to a second, and then to a steady stream of get-togethers.

During their courtship Mr. Buford shared with Ms. Mathis his love for his hometown: They took in charity events, numerous local parades, attended Giants baseball games and, because he’s a season-ticket holder, were courtside for the Golden State Warriors’ many victories.

For the first time, Ms. Mathis said she found acceptance of both her strengths and her vulnerabilities. She found Mr. Buford to be solid, dependable and kind, like her father.

Mr. Buford found a partner who respected his dedication to his career and celebrated that passion while genuinely understanding its demands.

Sherisse Taylor and her husband, Bruce Taylor, have been close friends with Mr. Buford since high school. They saw this partnership as a perfect pairing. “Shon has transformed, he’s more vulnerable than ever before, and both he and Julia allow the other to have their own life,” Ms. Taylor said.

Last Christmas, after driving home from a Warriors game, Mr. Buford detoured to the waterfront, ostensibly to retrieve something for work from a fireboat. On the bow of the Phoenix, a fireboat put into service in 1955, the year the first African-American firefighter was hired in San Francisco, Mr. Buford surprised Ms. Mathis with an engagement ring previously belonging to Ms. Mathis’s mother. (It was a gift from her husband.)

On June 7, a spectacularly sunny day, the two married at San Francisco City Hall, with eight family members and friends in attendance. It was an auspicious day for both the bride and groom: The date fell on what would have been Ms. Mathis’s parents’ 44th wedding anniversary, and in 1993, this was the day Mr. Buford started as a San Francisco firefighter.

Fiona Ma, the state treasurer of California and friend to the couple, was the officiant. The short ceremony opened with a prayer led by the groom’s godfather, Dan Campbell, who urged the couple to “choose to see the best in each other, even in the worst of times.” In closing, the group joined hands and recited the Lord’s Prayer.

In a mermaid-shaped dress by Badgley Mischka, paired with a bird-cage veil, Ms. Mathis turned the heads of many tourists and those in other bridal parties as the couple posed for photos in the building’s ceremonial rotunda. Carrying a classic bouquet of red roses into which she had tucked a photograph taken during her college years of herself with her father, Ms. Mathis occasionally pumped her palms skyward in a spontaneous gesture of what seemed like both hallelujah and victory.

“Love doesn’t always happen how or when you think it will,” she said. “This love was worth waiting for.”

But Now Where? The bride and groom both have rent-controlled apartments in San Francisco and are in the process of trying to buy a house. “My apartment is mad girlie, it’s all fashion magazines and Louboutins,” Ms. Mathis said.

A Big Heart After her father’s sudden death, Ms. Mathis lent her beloved dog, Teddy, to her mother to soothe her grief. Teddy remains in her custody, and flew in for the wedding weekend.

The ‘Mayor’ While waiting for his bride at City Hall, Mr. Buford seemed to know everyone. Later, at the fire station, he spoke with firefighters, tourists, well-wishing citizens, and even a high school buddy who jogged past by chance. Through all conversations his newly minted and patient wife looked on approvingly.

Smooth Sailing The bridal party boarded a fireboat, the St. Francis, for a short cruise along the waterfront. The name tag of the captain of Engine No. 35, where the boat is docked, read “S. Francisco.” (His first name is Shane.)