Gran, 82, who married Egyptian toyboy, 36, reveals sex positions they love and how he doesn’t care about her dentures

PENSIONER Iris Jones raised eyebrows on This Morning when she talked about wedding her Egyptian toyboy – 46 years her junior.

Iris, 82, married 36-year-old engineer Mohamed Ibriham, a year ago, and made telly hosts Holly Willoughby and Phillip Schofield blush with spicy tales of their sex life. 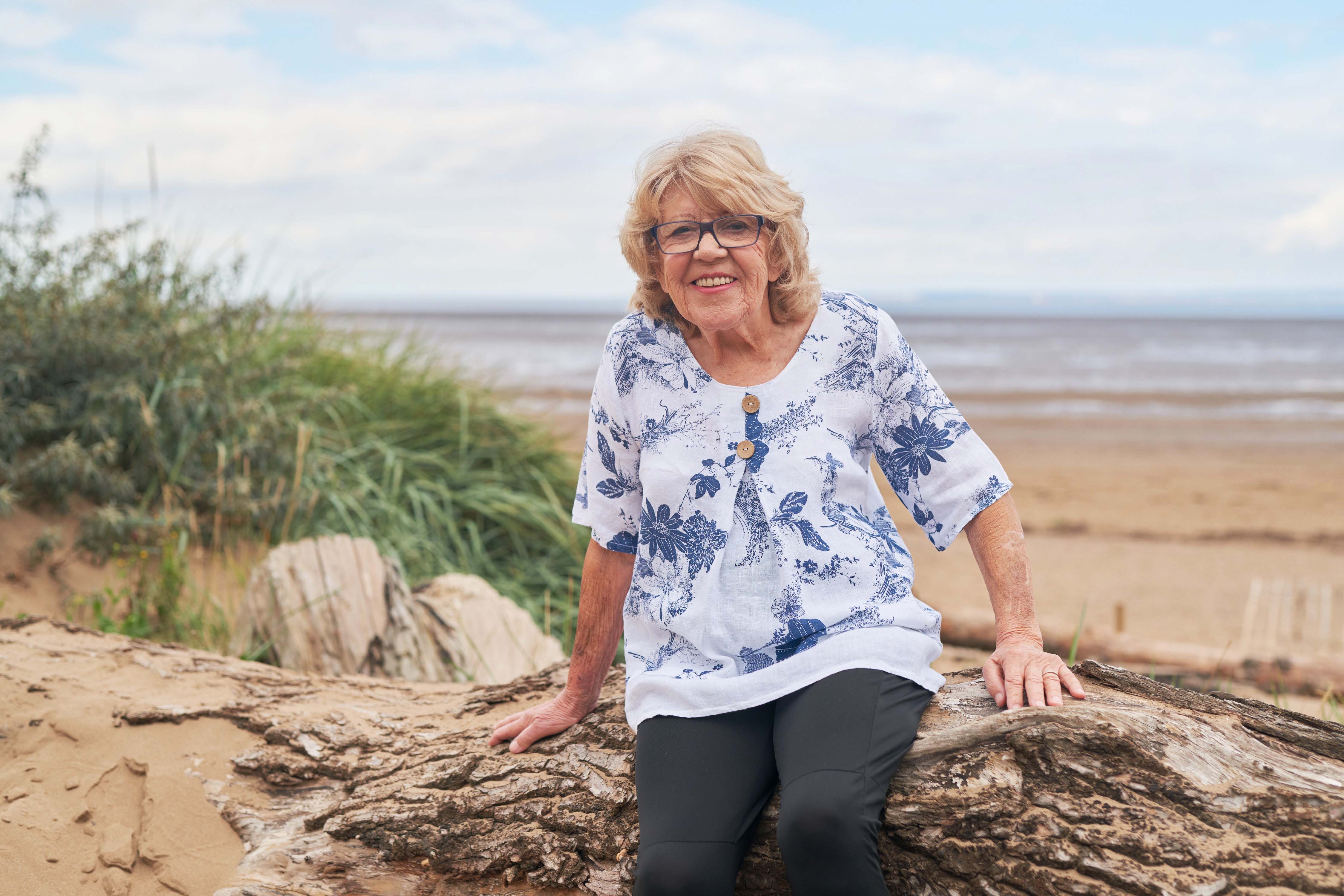 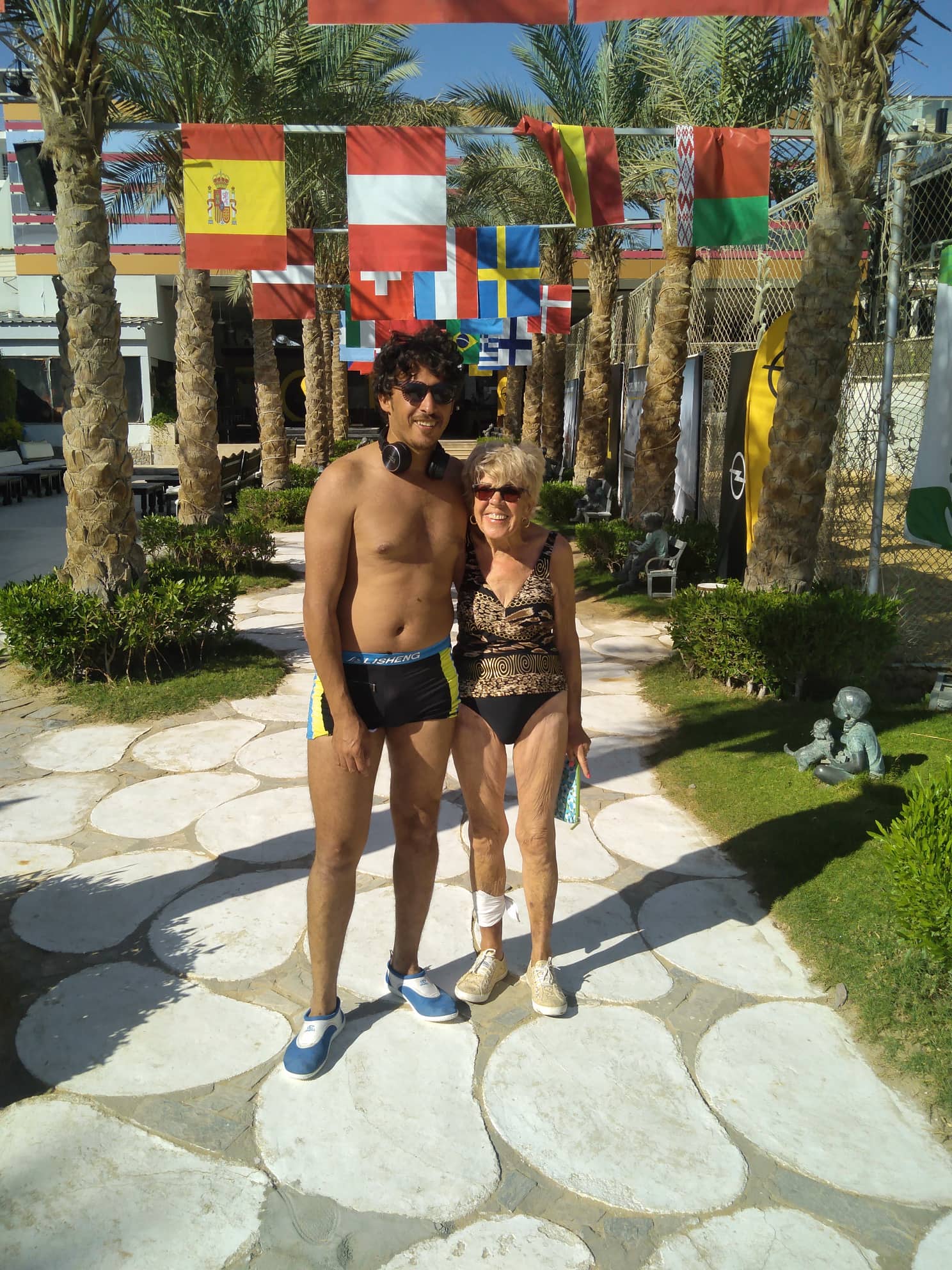 But the Home Office is yet to grant Mohamed a spousal visa, keeping the couple 5,864 miles apart, and leaving Iris distraught.

Just ahead of her first wedding anniversary, which is today, Iris says: “The heartache is unbelievable. All we are talking about now is what will happen when we meet.

“My solicitor says I have to be positive. I am just hoping it will be good news. I miss Mohamed so much, I just want him with me in the UK.

“If he didn’t get a visa it would feel like the end of the world. It’s like he’s dead but he’s not dead — just missing.”

Mohamed adds: “I miss my Iris so much.”

The decision on whether Mohamed will be allowed to move to the UK should be made in early November after the pair applied for his visa in August.

Iris, from Weston-Super-Mare, Somerset, says: “All the Home Office cares about is evidence of a relationship and we have plenty of that. They want proof he has somewhere to stay too and that’s fine, I own my own bungalow.

“They are also interested in him having a good command of English. He’s passed the required English test.

“They also care about finances. Apparently you have to have £64,000 of finances for someone to come over from the Far East on a spousal visa. I don’t have this but it might be a bit different because I am a pensioner.”

Iris says that Mohamed’s move to the UK would be “great for the economy”, and adds: “He could work at Hinkley Point power station — he’s a trained engineer.”

Iris left viewers speechless when confessing on TV back in January last year that she had used an entire tube of KY Jelly lubricant when first getting intimate with Mohamed.

"The tablets I take make my skin terribly thin," Iris says. "So we can only do it lying down, with him on top of me. Otherwise it’s very painful and I’ll bruise.

"I teased Phil and Holly by saying we did it doggy style and the position we manage is a bit like that but not really – it’s flatter." 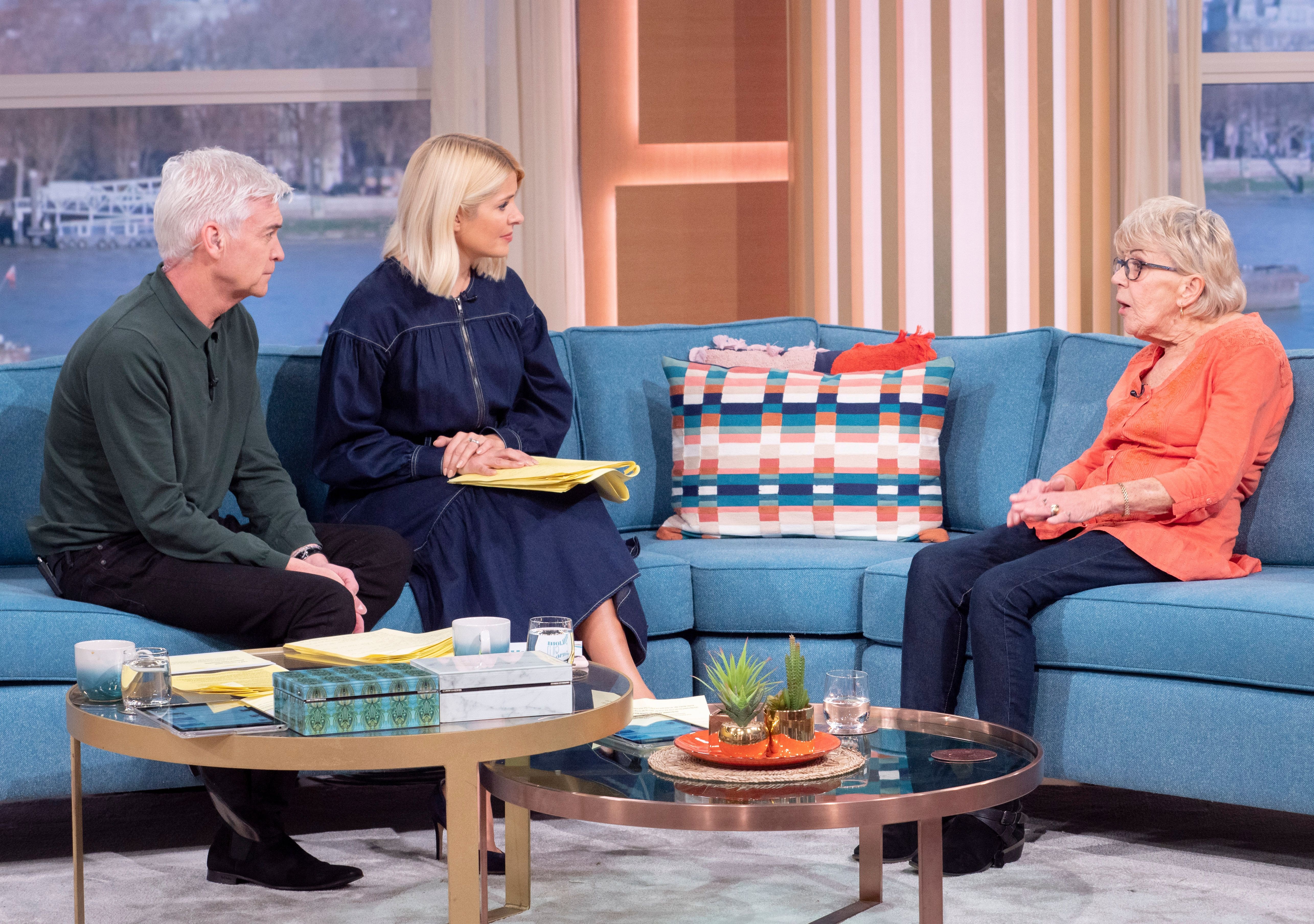 She says: “I love shocking people. Why not? It gives them a laugh. I’m a prude really — although I did use the KY Jelly. It spices up people’s otherwise boring lives to hear about what I am up to in the bedroom.

“Saying that, Mohamed is my pharaoh. He is pure Egyptian. He’s very, very sexy. He’s a wonderful man.”

But many viewers were concerned that Iris could be being conned by her new lover, whom she met on Facebook in early 2019.

Iris, who is mum to postman Stephen, 55, and recycling truck driver Darren, 53, says: “I’ve seen programmes on television about women being scammed for thousands by younger men but I’ve never been this in love before.

“I know people think I’m a daft old biddy and he is taking advantage of me, although not for money — I don’t have any. I am not the sort of woman who can be scammed. And he’s never asked for any money — we split all expenses 50/50.

“I’m not afraid he will get a visa and then drop me. I trust him with my life.

“We last saw each other in December 2020, because of the pandemic and also because neither of us can afford to fly back and forth.

“But we talk on the phone or on Facebook morning, noon and night and he swears he is faithful to me. I won’t give up until the Home Office have granted his visa.”

When retired care worker Iris met Mohamed, she had been divorced for 27 years and love was the furthest thing from her mind.

“But I wasn’t lonely. I am not a lonely person — I like my own company.”

Iris’ life changed for ever in early 2019 when son Stephen bought her a laptop and signed her up to Facebook. She joined a group for atheists, which is where she got chatting to Mohamed.

She says: “His intellect shone through and when he sent me some pictures, I thought, ‘Oh my God he is drop-dead gorgeous’. But I realised how young he was, so I never thought anything would come of it. He was in an arranged marriage for ten years that ended in May 2020, though they separated two years ago.

“When he started calling me ‘Babe’, I said, ‘Don’t start getting romantic notions, I’ll soon be an octogenarian’.

“But I realised I was falling in love with him. He told me he loved me first about three weeks after we met. He said, ‘I didn’t intend to fall in love with a 79-year-old Iris, I just did’. He thinks we have a spiritual connection and were meant to be.”

In November 2019, just five months after they connected online, Iris flew five hours from London’s Heathrow to Cairo for their first meeting in real life.

She says: “I had a wedding dress in my bag. It was just assumed we would marry, we were in love.

“In the arrivals hall I saw this tall, incredibly handsome man and just jumped into his arms.”

Mohamed, who moved back in with his parents after his marriage broke down, paid for them to stay in an apartment in the city. It was there, hours after they met, they first got intimate.

She says: “I was a bit shy about him seeing my body. He’s so young and muscular whereas I’m an old hag.

“But he thinks I’m really gorgeous. I always feel ugly but he says I’m beautiful.

“We didn’t just have sex, we’d lie in each other’s arms too.”

Unfortunately, they weren’t able to get married because Iris hadn’t realised she needed to bring her divorce papers with her. After a month, Iris was devastated to fly back to the UK but a month later she paid another £600 to return to Cairo.

She says: “Seeing him again was perfect. We learn so much about each other every time. I am a cantankerous old biddy whereas he is more relaxed. But we balance each other out.”

Unable to marry during that visit either, as Mohamed’s divorce had not yet been finalised, the pair finally tied the knot during Iris’s third visit, where she followed all government travel guidelines, in October 2020.

She says: “My sons didn’t know about it until they read about it online but I didn’t care what they thought. This is my life. The wedding was very simple, in an office building. Afterwards we celebrated with Coca-Cola and KFC. That night, we just cuddled, then made love the next morning. It was the best sex of my life and I was so happy.”

Now, Iris is focused on getting Mohamed over to the UK after ten months apart.

She says: “I don’t know what I’ll do if I don’t see him soon, I can’t live in Egypt — it’s too hot and I need the NHS. But I’ll move there if I have to. Nothing will keep me and Mohamed apart.”

A Home Office spokeswoman said: “This application was submitted on 12 August, with biometrics taken a week later.

“We will aim to make a decision within our service standard of 60 working days from receipt of biometrics.” 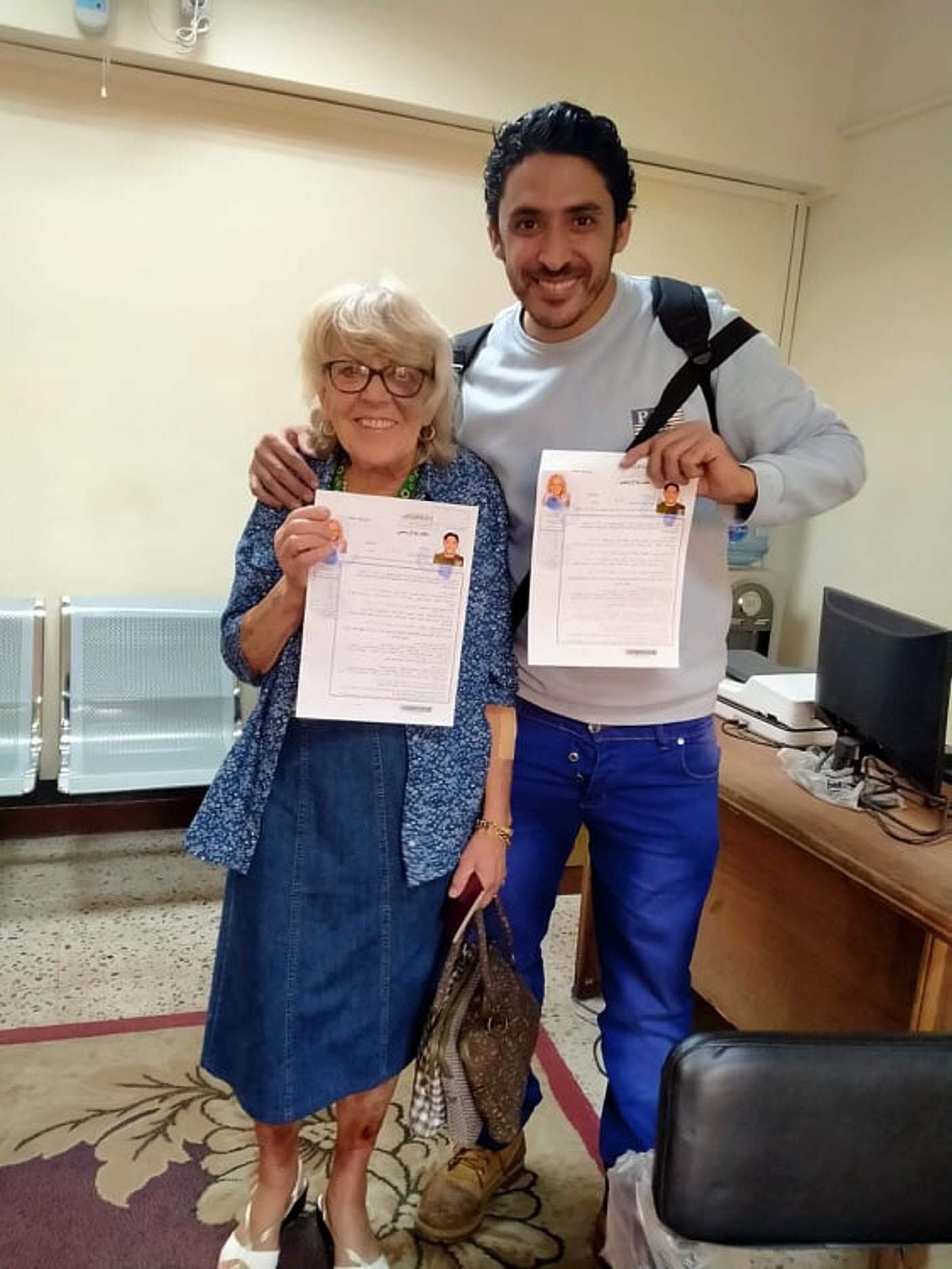 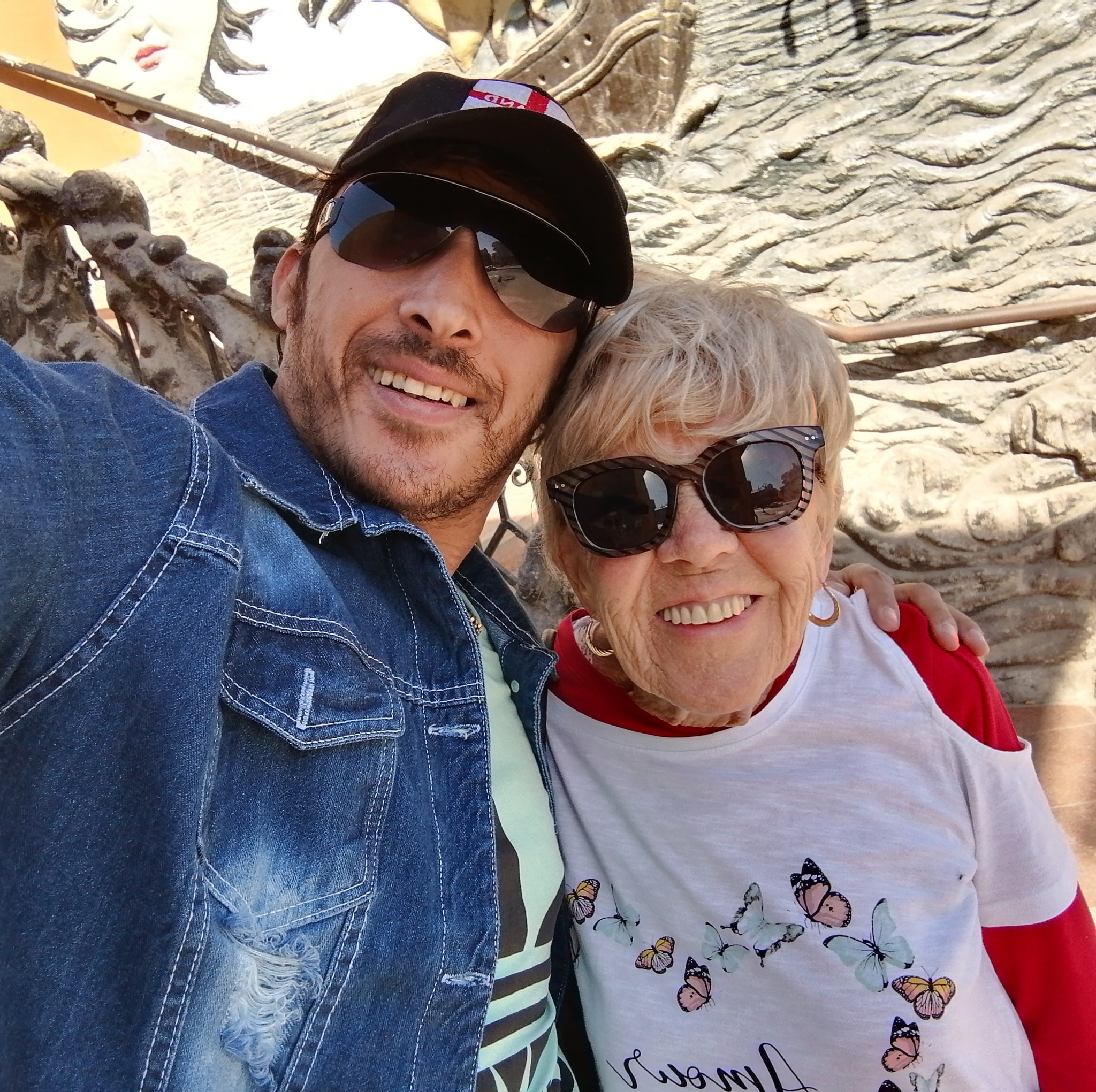