Home » Fashion » Ignore the critics, the clothes are the true stars of Gossip Girl

In Year 11, I decided I was too good for regulation school shoes, and convinced my mother to buy me a pair of Doc Martens “eight ups”. Wearing boots was not OK according to the rules of my private school, so each day, I had to wear knee-high socks that I strategically folded, rolled and “poufed” to create the illusion I was wearing loafers.

I was reminded of my senior school subterfuge again this week when I watched the premiere episode of the rebooted Gossip Girl, which takes place on the same rich, insular Manhattan Upper East Side as the show’s first incarnation but in the aftermath of Black Lives Matter and a pandemic. So how does that affect the clothes? Glad you asked. 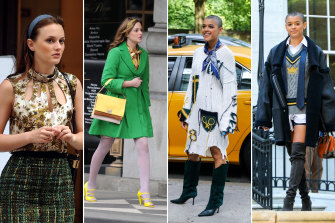 Contrasting styles … Leighton Meester (left) as Blair Waldorf in the original series, and Jordan Alexander as Julien Calloway in the reboot.Credit:Getty

Lana Coppel, founder of online store Order of Style, has watched both series and says while the original was very “editorial” and even “camp” in its tropes, “the reboot is sleeker, the understated mood makes it feel like an adult drama … The fashion feels homologous within the group – I could easily envision any of the characters cycling through the outfits of the others with ease.”

And while the characters may be just as wealthy as their 1.0 counterparts, Coppel says gauche expressions of wealth are discouraged. “Understated style is de rigueur, and the new version feels like the fashion has shifted to a more global aesthetic and less American,” she says.

Hard as it is to believe, the original Gossip Girl was released before Instagram notched up its first like, so that already sets it well apart from its successor. And, in an interesting piece of casting, Tavi Gevinson, who rose to fame as the tweenage editor of fashion blog and magazine Rookie, now 25, plays one of the teachers at the fictional Constance Billard School. Since the new show premiered, fan fashion sites including @gossipgirlstyleguide have begun springing up, guiding viewers on how to bag the show’s outfits IRL. What we know is that an orange dress and black catsuit by Australian designer Alex Perry appear in the first episode. The dress is currently 50 per cent off at Net-a-Porter, though it will still set you back $1600.

If you spot any likenesses between the style of it-girl Julien Calloway (played by Jordan Alexander) and that of some of the world’s most in-demand celebrities, you’re not wrong. Costume designer Eric Daman, who also designed the original show in all its padded headband glory, told Women’s Wear Daily that models Kaia Gerber and Hailey Bieber were both on Julien’s “mood board”. But in a nice antipodean twist, Daman said Australian model Adut Akech was also a major influence on Julien’s overall look. “[Akech’s] Instagram is incredible and her behind-the-scenes international streetwear is just incredible,” he says. “She has such an amazing way of pairing things and that just felt really right as the baseline for who Julien is.”

If the headbands worn by Blair Waldorf (Leighton Meester) epitomised the posh preppiness of the show’s first run, then, according to Daman, statement earrings, preferably mismatched, may be the accessory that defines the second (as well as some serious investment bags). Daman says that it made sense to play with earrings given Julien’s buzzcut draws the eye to her ears. “The way I would play with Blair’s headband in the colour and the tone to go with the outfit and also what was going on with her emotionally in the scene [in the original show], I’m doing a similar thing with Julien’s earrings,” he told WWD. Not far behind the earrings, dainty neck scarves are also a feature in the first episode. 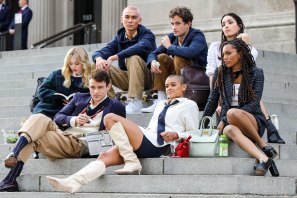 The cast of the Gossip Girl reboot.Credit:HBO Max

Arguably the most standout feature of the GG 2.0 wardrobe department is its penchant for leaning into gender-agnostic or gender-fluid dressing, and the use of many Black and POC designers. If the Gossip Girl of Blair, Serena and Chuck was heavy on logos from the legacy brands such as Chanel and Dior, then the new version celebrates the “new-guard” of Monse, Christopher John Rogers and Wales Bonner. Of course, there are plenty of pieces by old-school designer brands but in a neat twist, several of them are vintage. And if you needed any confirmation of designer vintage’s cred with Gen Z, look no further than 18-year-old singer Olivia Rodrigo’s 1990s’ Chanel suit at the White House last week; an instant classic.