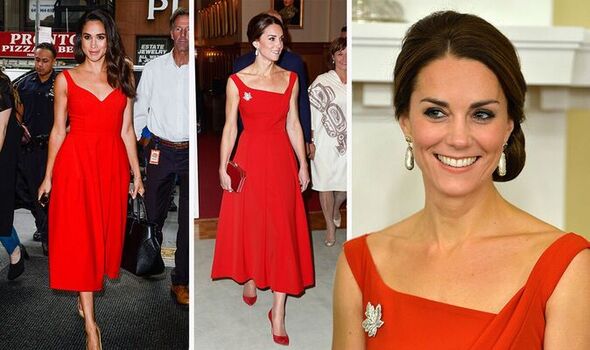 Red is not a colour Kate, Princess of Wales wears often, occasionally she will be seen in a red coat or jumper, but a red dress is not her go-to choice for official engagements or dinners. Meghan Markle, on the other hand, has stepped out many times in the past few years wearing jaw-dropping red outfits. In 2016, both women wore a nearly identical red dresses, just a few months apart.

In July 2016, Meghan was photographed entering the Today Show building in New York.

For the occasion, she wore a red scarlet midi dress and gold heels, carried a large black leather handbag and occasionally wore a pair of tortoise shell and black sunglasses.

The exact dress Meghan wore was the poppy dress from the brand Jill Jill Stuart, and it featured a sweetheart neckline and a flattering fit and flare skirt which fell mid-calf.

A couple of months later, Kate and Prince William flew to Canada for a royal tour. When attending a Government of British Columbia reception at Government House, Kate walked out in a bright red dress.

According to Vanity Fair at the time, “the Duchess went ultra-glam” for the evening and chose a £1,000 red dress from Preen.

The Finella dress was made from stretch crepe fabric and featured an asymmetric neckline, draped bodice, nipped-in waist and box-pleated skirt.

It came in several colours; red, black, royal blue and teal. Kate owns and wore both red and black that year.

Net-A-Porter called the red version of the dress an “elegant choice for your next event”.

They described it as having “a shoulder-framing neckline” and “a fitted, draped bodice that falls to a voluminous box-pleated skirt”.

The model on the official website, however, wore the straps off the shoulder, but Kate chose to wear the straps across her shoulders.

To complete the look, Kate chose a pair of red suede heels from Gianvito Rossi, a brand she regularly wears for heels. The red shoes were the designer’s signature style with a four-inch heel.

She carried a red Jenny Packham Casa clutch which she also has in sparkling silver, and accessorised the outfit with a pair of Soru baroque double-sided pearl earrings.

The earrings featured iridescent baroque pearls and Swarovski crystals in an 18ct yellow gold vermeil over a sterling silver setting.

In keeping with royal tradition, Kate chose a brooch with symbolism of the country they were visiting.

She had pinned the Royal Family’s diamond maple-leaf brooch to the dress. The brooch had been given to the Queen Mother by her husband, King George VI, to commemorate their visit to Canada in 1939.

Kate wore the same piece during her royal tour of Canada in 2011.

While Meghan hasn’t worn her red dress since 2016, Kate has been spotted in her red Preen dress.

In September 2021, Kate joined Prince William, Prince Harry and Meghan for a Royal Foundation dinner where she paired the dress with the same clutch bag.