THEY say that every cloud has a silver lining – and for 13-year-old Oliver Cooper, the spread of coronavirus throughout the UK has been an excellent opportunity to make a bit of extra pocket money.

After hearing about the national shortage of hand sanitiser, the Yorkshire schoolboy bought a bottle of Johnson's hand wash for £1.60 while waiting for the bus. 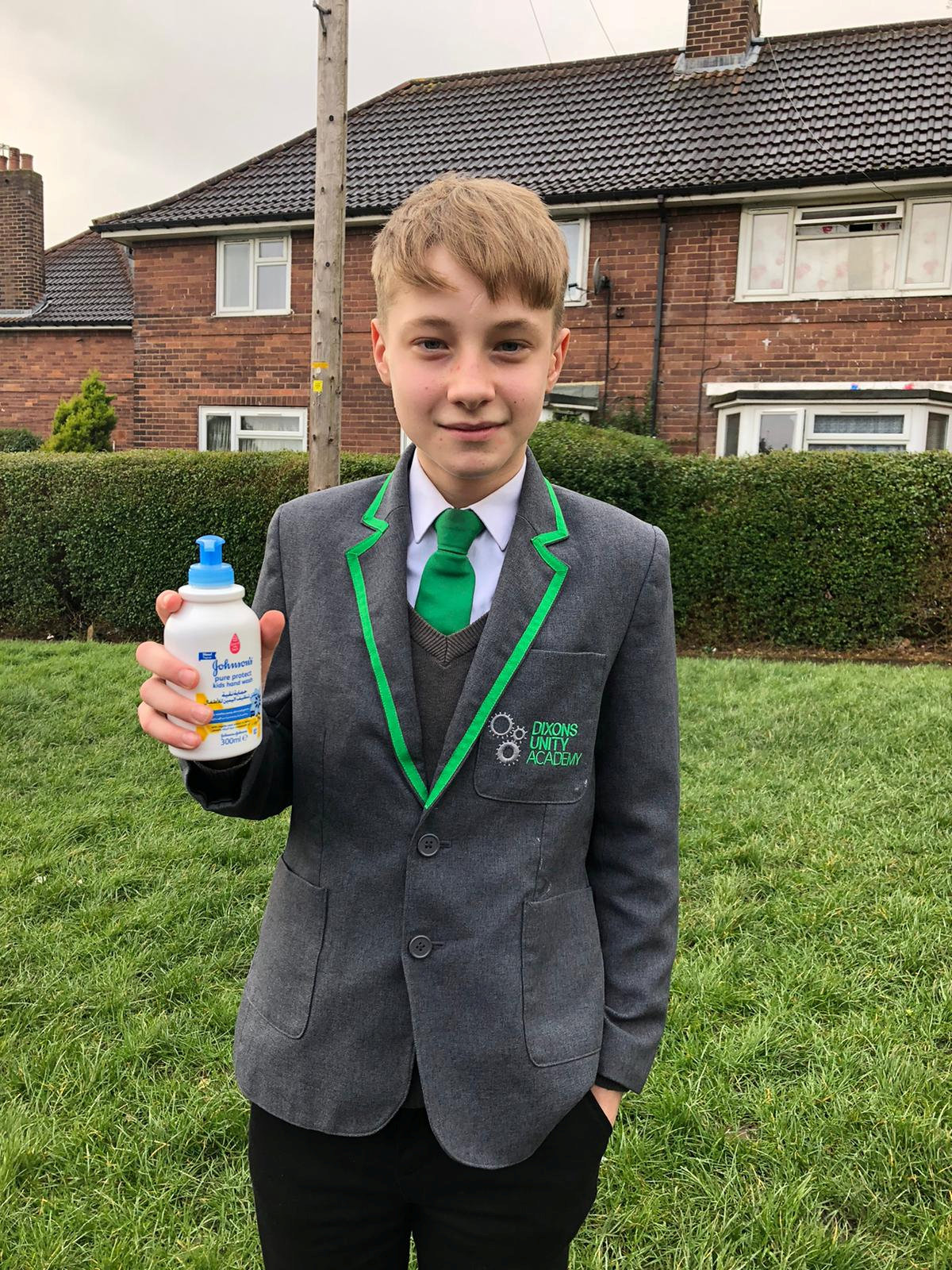 Although Oliver originally started off by offering the sanitiser to his pals for free, they suggested he turn the charity into a business.

On their advice, the teen then began charging his coronavirus-fearing colleagues at Dixon's Unity Academy in Leeds 50p a squirt – and made £9 in no time.

But while no one can fault Oliver's business eye (or his cool £7.40 profit), the student was sadly sent home this morning for violating school rules.

Unsure whether to be angry or impressed, Oliver's mum Jenny Tompkins vented on Facebook after her son arrived home.

She wrote: "This is a picture of my teenage son just getting in from school.

"Why is he getting in from school at 10:53am you ask? Schools don't finish until 3pm.

"Well the little turd has just been expelled from school for the day after being caught charging students 50p a squirt for hand sanitiser to protect themselves from b****y coronavirus!"

What's more, Jenny turned to Oliver's dad in the hopes that he'd give him some strong words… but it unfortunately had the opposite effect.

She continued: "Very hard to discipline this behaviour when his dad phones him from work to call him a f**king legend."

Other people at school sell stuff like chewing gum, if somebody wants something, they will pay for it. Loads of people wanted this…

That said, Oliver isn't too bothered about being excluded and has already spent his hard-earned cash on a multi-pack of Dorito's and planning on splashing the rest on a kebab later.

Giving his side of the story, the teen explained: "I usually listen to music on the way to school on my phone, but it's broke, so I've been using an old Nokia and all I can listen to is the radio.

"They've been going on about the coronavirus and how important hand sanitiser and washing your hands is.

"So before the bus came, I bought a tub of hand wash from Tesco and offered to it my mates.They gave me the idea that I could charge for it, so I did. 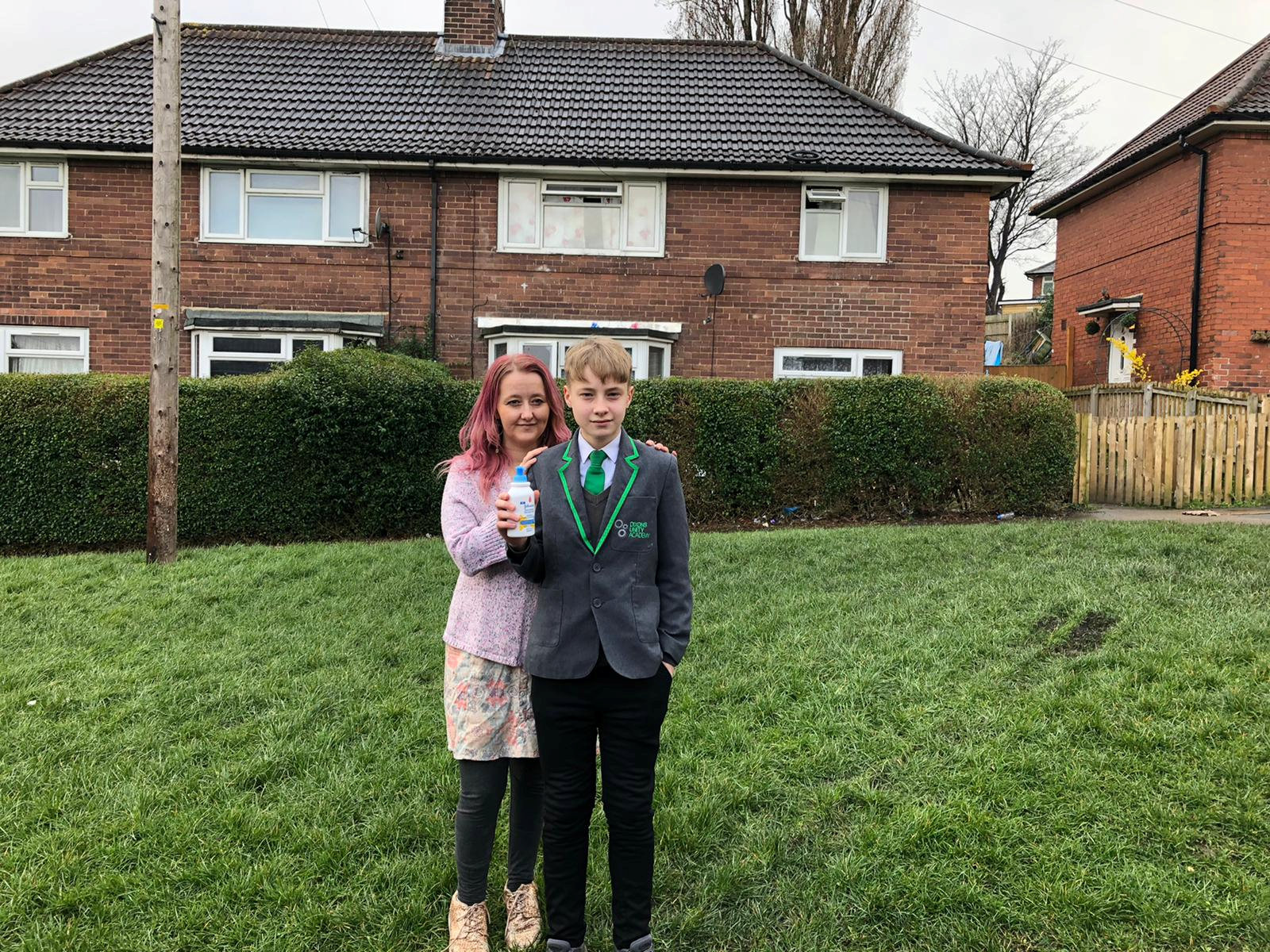 "Other people at school sell stuff like chewing gum, if somebody wants something, they will pay for it. Loads of people wanted this."

On top of his exclusion, Oliver is now facing a day in isolation and a two-hour detention when he returns to school.

He said: "It's ridiculous really. I asked the teacher if they wanted any and she said 'no, I've already got some, but you're not allowed to do that'."

Although she was angry at Oliver, Jenny said: "I don't think it's an excludable offence.

Coronaviruses are a large family of viruses that can cause infections ranging from the common cold to Severe Acute Respiratory Syndrome (Sars).

Some of the virus types cause less serious disease, while others – like the one that caused Middle East Respiratory Syndrome (Mers) – are far more severe.

In 2003 an outbreak of a similar virus, Sars, killed more than 900 around the world within weeks.

Symptoms are similar to a common cold.

"I told him off so that when we go into school, I can tell his head of year that I have told him it's wrong.

"I think they see it as him exploiting a situation, but his step dad called him a legend halfway through me telling him off so that put a stop to it.

"He's like my little Del Boy, I won't be punishing him any further. He'll do what he has to at school, but that's it."

In more parenting news, this mum-of-16 was shamed for buying "too much" toilet paper amid coronavirus stockpilers – but it was just her weekly shop.

Plus mums have been slammed for feeding babies dangerous "knock out" bottles packed with cereal, rice and even MEDICINE to boost sleep.

Inside the Wildly Unconventional World of Junya Watanabe

The 2021 Way of Wearing Your Dr. Martens Boots, and Where to Buy Them