“It speaks to the world we are living in today,” said Christopher Raeburn, global creative director of Timberland. “Five or 10 years ago two brands like this wouldn’t have come together. Because you would think we should be competing, but things have really changed a lot.” 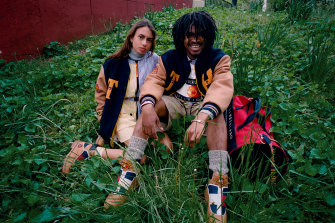 Fashion collaborations used to see prestige brands partnering with the mass market for greater recognition, such as Stella McCartney for Target in 2007 and Versace for H&M in 2011, creating the “masstige” phenomenon. On this new battleground where the old guard harnesses contemporary cool, Tommy Hilfiger reigns supreme.

Timberland is the latest in a revolving wardrobe of labels targeted by Hilfiger, following team-ups with Vetements, Kith and celebrities Zendaya, Lewis Hamilton and Gigi Hadid. These keep the 36-year-old Tommy Hilfiger brand, with $US6.9 billion ($9.2 billion) in global sales in 2020, fresh and in the streaming social media feeds of the valuable youth market.

“I’m a very open-minded person,” Hilfiger said on a Zoom call from one of his homes in Palm Beach, Florida. “I like to see and hear how other people think and what they can possibly bring to the table in terms of inspiration. Sometimes the more unique the inspiration, the more exciting it is.” 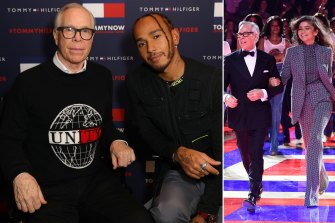 “We are both old school iconic American brands. Timberland is very much rooted in the outdoors, and we are preppy streetwear. Blended together it makes for an exciting collaboration.”

By teaming up with Timberland, Hilfiger has injected strong utilitarian elements into the collection, with covetable hiking boots uniting practicality with bold colours borrowed from the American flag, preppy stripes in unexpected fabrics and on-trend neon zipper tags. The entrepreneur has tapped into Timberland’s current cool moment, orchestrated by the British artist and designer Raeburn, who has elevated the brand’s appeal far above the ankle with a strong focus on sustainability.

“It’s just such an honour that Timberland put their faith in me knowing that my approach to design was pretty radical and very experimental,” Raeburn says. “I’m really proud to say that we have brought a lot of our learnings into the project with Tommy, with regenerative natural rubber and elements like that. And Tommy have done the same in teaching us.” 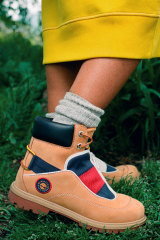 The Tommy Hilfiger x Timberland transforms the hiking boot which was a symbol of nineties cool.

While Timberland’s parent company VF Corporation owns Supreme, The North Face, Vans and Dickies, the collaboration temporarily gave Raeburn the keys to the Hilfiger kingdom. “The folk from Tommy bought loads of their archive pieces, just beautiful, and we were undoing these suitcases just going ‘Wow’.”

It was a similar experience for the amiable Preston at Calvin Klein, working on his second collaboration alongside product manager Jacob Jordan. “I can remember the very first moment of walking into the archives and discovering the history and heritage of the brand. Walking into Calvin Klein’s office, where we set up our office, was like being a part of this historical moment.”

Calvin Klein has been without a creative figurehead since Klein sold his brand to PVH (owners of Tommy Hilfiger) in 2002 for more than $US400 million ($534 million). An attempt to harness the energy of Prada co-designer and former Dior creative director Raf Simons in 2016 failed, with the revered Belgian leaving two years later.

“Doing anything for Calvin Klein there is a tremendous weight and pressure that comes with that… Calvin Klein had always been such a pioneer of new,” Jordan said. “There is something very intimidating about that. One of the things I remember most is feeling that we were doing something new.” 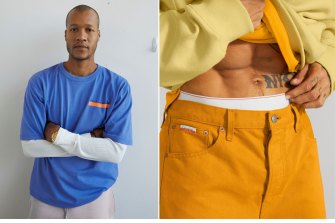 US designer Herron Preston and his collection for Calvin Klein.

Preston’s oversized silhouettes, gender-neutral approach and utilisation of underwear elements in clothing is a refreshing update for Calvin Klein, pushing the brand forward, which is what Rabeurn says is the whole point of stitching with the enemy.