Generally, long before a clothing company makes history of its own, it channels history.

Yesteryear is a steady source of ideas and moods, and heritage brands use it as both foothold and foundation. Picking an era in the past as a lodestar is a way of planting a creative flag, and mining and recombining its DNA has been the way that plenty of companies — say, Ralph Lauren and its many tributaries — have come to occupy a place that’s steward of the past and path breaker of the new.

When we think of heritage, we tend to think of source material that’s many decades old. But what if your reference year is 1994?

In its smart, accessible, post-street-wear clothes, you see the shadow of the first era in which big-tent men’s wear — Polo, Tommy Hilfiger, Timberland, L.L. Bean — was forced to reckon with hip-hop, since hip-hop was already reckoning with it. The silhouettes were blocky, the color choices were bold, the fabric weights were substantial, the logos were supersized. 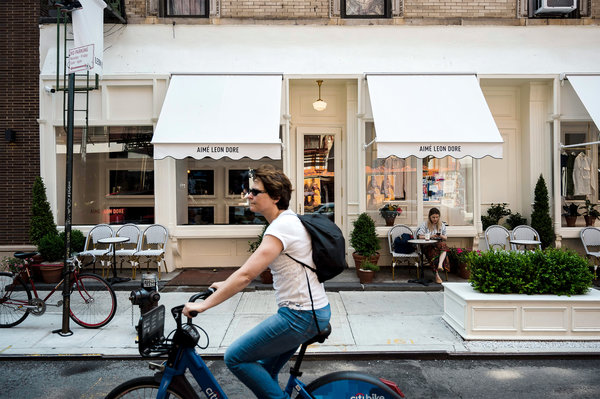 These are the choices that Aimé Leon Dore takes as gospel. The company began around five years ago with a spark of an idea from Queens-raised Teddy Santis, who had no formal experience in the clothing business, and a bit of a marketing assist from Ronnie Fieg, of Kith.

Before long, the brand had established itself with the values of restraint and concision. One category at a time — a fleece here, a Wallabee there, track jackets and baseball jerseys — it built a story about sleek dressing. And as the company evolved, it embraced its commitment to the spirit of 1994 even more deeply.

These are the clothes on display at the new Aimé Leon Dore store on Mulberry Street, which opened in February just up the block from the cool-girl pizza spot Rubirosa.

One recent Saturday afternoon, Mr. Santis was on the street outside his store, receiving well-wishes and sweating over the details. One quiet young man politely asked to take a photograph with him. A few minutes later, an old acquaintance of Mr. Santis’s from Queens, someone he hadn’t seen in years, came up to offer congratulations wearing an old Aimé shirt.

The weather was beautiful — one of those just-after-Memorial Day New York weekends when everyone leaves town and the streets downtown feel almost European. The seats outside the store were all full; some people had coffee from the in-house cafe, some had bags from the store, some had neither.

It was all fine, said Mr. Santis, who in between conversations, was paying enough attention to identify a critical shopper hoping to slip by unnoticed.

Take the cafe, he said: an extension of the store but also accessible by its own door. It’s an upscale nod to Mr. Santis’s food-industry history — he grew up working in the family diner — but also an alternate approach to the idea of how to develop, and sustain, heritage.

At the cafe, I had a freddo espresso ($4.50) and a melomakarona, a kind of honey cookie ($2), both of which were sweet but not overly decadent. Over the course of the afternoon, several people popped in, got a coffee or tea, and then walked right out, never once looking at the clothes in the adjoining room.

Those people, they’re forging a bond, too. Aimé Leon Dore is part of the fabric of their personal New Yorks. Being a part of the neighborhood, Mr. Santis said, was as important to him as making clothes.

The store is wide on the street, but not deep. In the main space, there is a pair of Winchesters facing each other for lounging. But the energy in the store was never still. Every time someone looked at a garment on the rack and moved it, one of a group of knowledgeable sales associates meticulously restored it to its original position.

The clothes were bright, and priced aggressively: colorblocked T-shirts, striped rugbys in unexpected color combinations ($260), camp-collar short-sleeve button-ups in a print with New York summer motifs like coco helado carts and playing in fire hydrant spray ($230). There were oxford shirts with austere logos. Corduroy caps that could pass for J. Press from a distance.

I fell for a pink, teal and yellow colorblocked oxford ($235) and bought it. It reminded me faintly of both the Ben Silver catalog and the dearly departed haute street wear brand Pegleg NYC. I also adored the tie-dye seersucker shirt-short sets ($325 and $305), especially in green and purple. They managed to be refined and obnoxious all at once.

Every season, Aimé Leon Dore extends its reach a little further with collaborations. It has worked with New Balance, New Era, Woolrich and Timberland, and Mr. Santis said there would be projects with Paraboot, and also with Drake’s on suits. Each of these exchanges adds something to the brand’s range, allowing it to imagine new, untapped contours of 1994 to explore.

At one point in the afternoon, Sean Wotherspoon, one of the owners of the Round Two vintage empire, popped into the store for a look around and to buy some shorts. The day before, Mr. Santis said, Tyler, the Creator and his friends had been by. Before long, it seems, Aimé Leon Dore will make that crucial leap, the one from seeking out inspiration to providing it.

The Look Clothes for when hypebeasts and sneaker freaks grow up and learn how to hold down a proper job.

The Vibe Patient and crisp, with ample room to look at the clothes. A cafe provides impetus to lounge.

Jon Caramanica is a pop music critic for The Times and the host of the Popcast. He also writes the men’s Critical Shopper column for Styles. He previously worked for Vibe magazine, and has written for the Village Voice, Spin, XXL and more. @joncaramanica