Home » Fashion » They Met in Touchy-Feely 101 at Stanford

Irene Fan Yuan came right out and told Colin Armand Evran that what he was wearing — an oversize, worn brown and orange argyle sweater, clunky black shoes and white bulky socks — was “hideous.”

“I gave him feedback honestly during class,” said Ms. Yuan, referring to a popular interpersonal dynamics course, nicknamed “touchy-feely,” that they both took in the fall of 2012 during their second year at Stanford (where each received an M.B.A.).

“We were already casual friends,” said Ms. Yuan, who met Mr. Evran their first year there. But the intense “touchy-feely” class with a dozen students, which met 10 to 12 hours a week in a small room, spurred on their friendship.

“Everything Irene does is out of the best interest of her friends,” said Mr. Evran, who took advantage of her criticism, and fashion-sense, and asked her to help with a wardrobe makeover.

She rose to the occasion, and audited his closet by piling up clothes, about two bags full, for Goodwill, followed by a trip to the Stanford mall where he came away with a few solid-colored sweaters and khakis and she then wrote up a grid matching up new and existing clothes.

Word of the shopping trip reached their other classmates. “It was as much as a reflection on Irene as it was on me,” he said with a laugh. “Her reputation was on the line.” 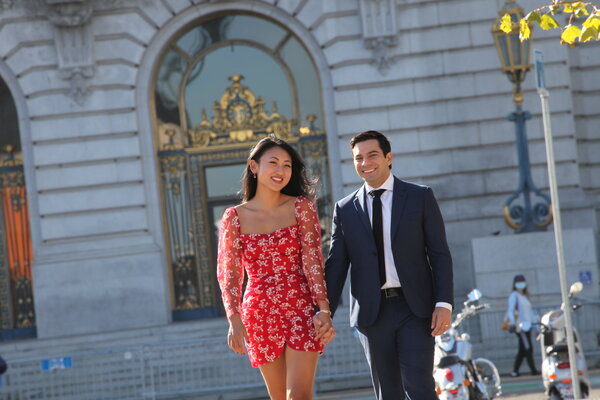 In 2013, while still at Stanford, he counted on her shopping savvy for a more professional look after he founded Yard Club, a software company for heavy equipment in the construction industry that he sold to Caterpillar four years later. Mr. Evran, 37, is now the chief operating officer based in San Francisco at Protocol Labs, a blockchain technology company. He graduated with distinction from the University of Western Ontario in London, Ontario.

Their shopping trips turned into an annual event, even after graduation when they each lived in the Pacific Heights section of San Francisco.

In 2016, a mutual friend, Alex Gelman, who sat next to her at a wedding in Wisconsin, suggested that she and Mr. Evran, both single at the time, start dating. And, a couple of weeks later, they decided to give it a try. Before heading to a friend’s birthday party together, they first had drinks and after the party they went dancing at a bar in the Marina neighborhood. They had their first kiss.

“Romance added to a really solidly free-flowing friendship,” he said.

In August 2017 they began a long-distance relationship for about a year while she worked in New York for a French clothing label. When she landed her current job based in San Francisco, and before moving in with him, she embarked on another makeover: his bachelor pad.

“He gave away every single piece of furniture on Craigslist,” she said.

Mr. Evran proposed in 2018 during a trip to Sintra, Portugal, and they planned a big Armenian-Chinese wedding, with about 200 guests at the Art Gallery of Ontario Aug. 15 in Toronto. But they set those plans aside after the coronavirus outbreak.

On Nov. 5, they were married at their apartment via Zoom by Michelle Castro-Diaz, a deputy marriage commissioner at San Francisco City Hall. Ms. Yu’s parents drove in from Petaluma, Calif., to attend, while his parents and brother watched via livestream from Toronto. Eight close friends later roasted and toasted them at Charmaine’s Rooftop Bar & Lounge in San Francisco, where earlier a few Stamford friends had dropped off a magnum of Champagne.

“He’s honestly everything I could have hoped for and more,” said Ms. Yuan, who is taking her husband’s name. “And, he has a great wardrobe now.”