MILAN — Alek Wek is the latest personality to team up with Weekend Max Mara on a Signature capsule collection.

The Sudanese supermodel and United Nations’ Good Will Ambassador teamed up with the brand’s in-house creative team to deliver “A.W.orld by Alek Wek,” a joyful and colorful capsule offering a range of urban staples.

Mixing “African culture with a London calling vibe and a touch of Boho,” as she said, Wek combined references from her origins with the needs for versatility required by an international lifestyle. The highly approachable pieces can be easily mixed and matched, helping women transition their style from day to night.

Striped ribbed knitted styles, spanning from tops to dresses, steal the spotlight in the collection with their color palette inspired by the South Sudanese flag. Dressier styles include overcoats, trenches and a shearling vest, all to be layered on draped dresses showing precious trimmings. While high-waisted flared jeans add a casual touch, a dramatic black velvet coat introduces a chic, evening twist to the capsule.

In this collaboration, Wek’s artistic eye is reflected through printed silk frocks and scarves with graphics borrowed from some of her artwork.

The collection is completed by a range of accessories, including Weekend Max Mara’s Pasticcino Bag featuring a detachable embroidered strap, a felt fedora, riding boots and a thick belt with crisscross laces.

All of the Fashion at the 2021 BAFTA Awards

“Working with Weekend Max Mara’s creative team has been an emotional journey. It all started last fall. I shared my ideas, my inspirations and especially my artworks with the team. It was amazing to see how they have transformed these ideas in such a good way, giving life to this collection,” said Wek. “They had the right sensibility to transform my artworks in such a wonderful way. It is incredible how beautifully they have put them into this collection.” 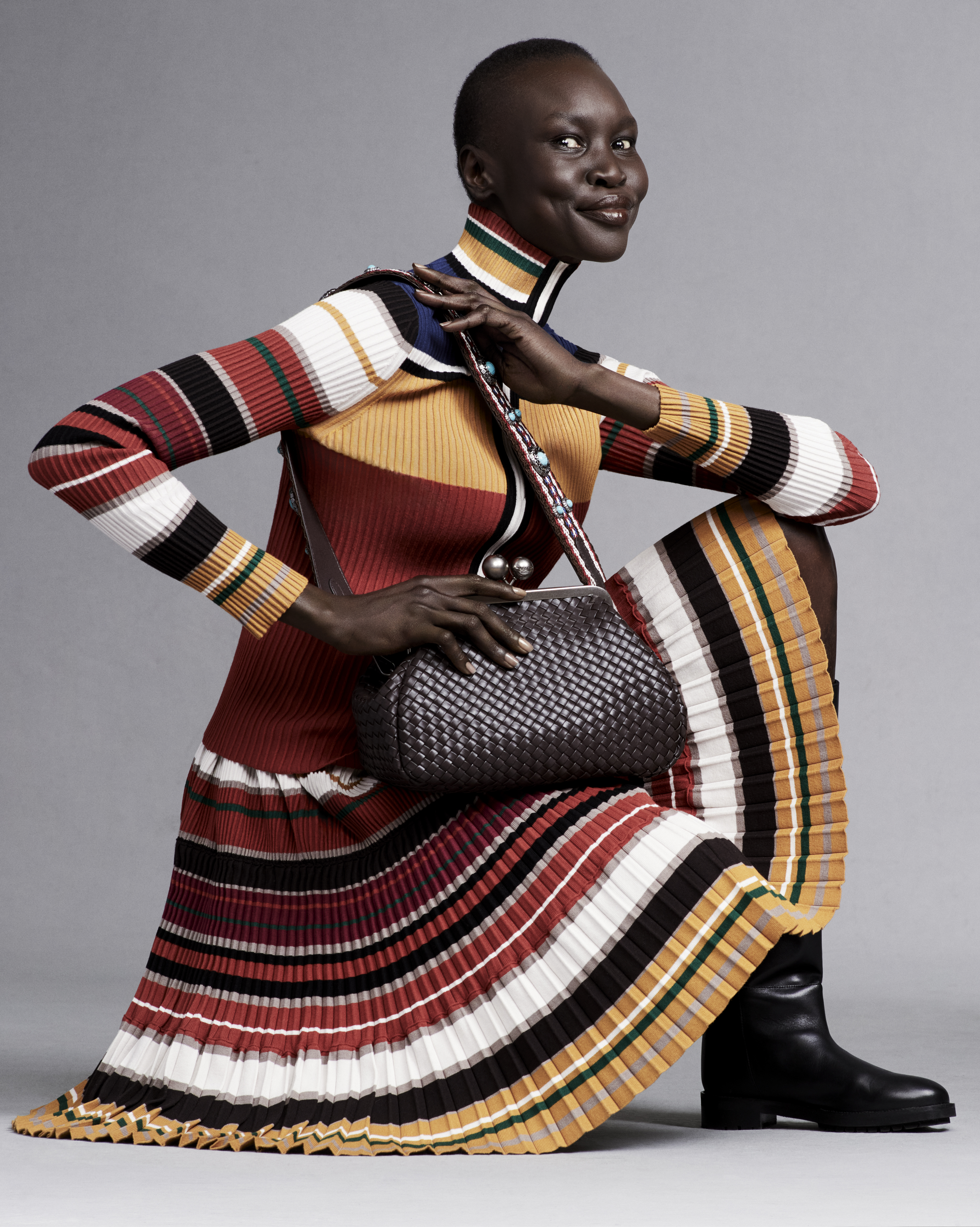 Wek is one of the most iconic models in the global fashion industry. Born in Sudan, she left her native country in 1983 during the civil war and moved to London, where she studied fashion business at the London College of Fashion.

She was discovered at an outdoor market in 1995 in London, the same year she appeared in Tina Turner’s “Golden Eye” music video, and a year later she was signed to Ford Models. In 1997, Wek became the first African model to appear on the cover of Elle.

Based in New York, in the past Wek also experimented with accessories design, launching the “Wek 1933” bag line, which was inspired by the brass-clasp briefcase carried by her father. The line is now discontinued. She has also appeared in several movies, including “The Four Feathers” in 2002 and most recently in Luca Guadagnino’s remake of “Suspiria” in 2018.

A Story of Women’s Empowerment: Max Mara at 70

Nineties Supermodels Come Together for a New Apple TV+ Docuseries