In a Surry Hills gallery designer Alix Higgins is preparing for the runway debut of his label at Afterpay Australian Fashion Week on Friday. Dynamic prints on pieces that challenge gender norms through a Gen Y filter tease the eye through translucent clothing bags, photographs of models are scattered on the floor and the 28-year-old graduate of design schools in Sydney and Paris is thinking of what favours he can pull to make his dream a reality.

“The clothes were the easiest part of getting ready for the show, it’s all the project management… and the money,” Higgins says. “Being my first season, people are discounting things and helping out but I don’t have backers, or family money.” 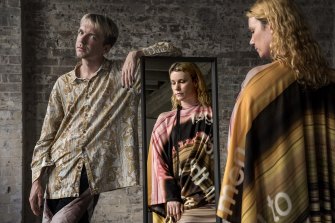 To cut costs, Higgins has enlisted the help of friends to model and act as crew for his show. Higgins’ mother came through with a birthday present of cash to pay for a professional stylist, and beauty brands are offering financial and backstage assistance.

“There are all these last minutes costs like catering for the models and certain photographers, so everything this season is on a shoestring,” Higgins says. “The hair and makeup is all very down to earth. There are no shoes.”

Little has changed since 1996 when Akira Isogawa sent models out in red socks for his runway debut because he couldn’t afford shoes. Sydney’s leading runway show producer Lara Karamian of Lara Inc., is juggling 11 events at AAFW, including Aje, Matteau, Bondi Born and Auteur, and dealing with last-minute budget changes 26 years later.

“This year many designers are struggling to get partnerships,” Karamian says. “In the past they’ve had guaranteed hair and make-up but this year they can’t rely on that. So, the designers are realising that they don’t have enough money, meaning we have to change the set or make other cuts. In Australia, you expect that.” 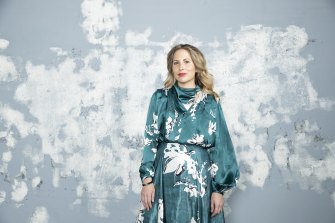 In 2020, the operators of Afterpay Australian Fashion Week, IMG, waived the fees for designers to appear on future schedules and show at Carriageworks, assisting businesses struggling after COVID-19 restrictions, but there are always further expenses.

“We provide a lot of the services, tech, AV and lighting,” says Natalie Xenita, managing director of IMG Fashion Asia-Pacific. “Back of house, head dressers, seating directors… It is up to each designer how much they budget to bring that show to life.”

“Models are one of the main costs. Then there are sets where you can pay to put a carousel in like Romance Was Born last year or be like Jordan Gogos and use papier-mâché.”

Even with arts and crafts cost-cutting Karamian recommends potential clients start with a minimum budget of $40,000 for staging a runway show.

“If you’re showing onsite at Carriageworks you can get away with an absolute minimum of $40,000,” Karamian says. “That’s with a cast of 15 models, no set or photographers. That can go up to $500,000, which is generally for an off-site show.”

Some of Karamian’s most impressive shows have been Bella Hadid appearing for Misha Collective in 2016, Carla Zampatti’s 50th anniversary show at the Sydney Opera House in 2015 and Aje’s takeover of artist Wendy Whiteley’s garden in Lavender Bay in 2018.

“There’s all the attention that runway shows receive but the people who were there walk away having experienced something that you just don’t get from a digital presentation.”

With some fashion buyers, including Net-a-Porter, preferring to watch shows digitally rather jump on a plane for a week in Redfern at Carriageworks, and a representative from department store Myer saying that the event is not a priority on their calendar, some industry figures suggest designers save their $40,000, or more, for a different experience.

“COVID-19 has made us all realise that there are other ways to do business with people on the other side of the world,” says fashion consultant David Bush, former general manager for fashion at David Jones.

“I don’t understand the purpose anymore, unless you’re producing content and paying influencers to attend. It’s an influencer event.”

Last year Rebecca Vallance celebrated the 10th anniversary of her business with a show at AAFW but is skipping the schedule this year, to focus her resources on other events.

“We are flat out opening stores, including our new flagship Chadstone store,” Vallance says. “Internationally we have an event that I leave for after Chadstone in New York. The US is now a big part of our business.” 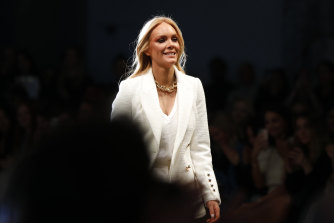 Designer Rebecca Vallance walks the runway during her show at Afterpay Australian Fashion Week 2021 Resort ’22 Collections at Carriageworks on May 31, 2021. Credit:Getty

Vallance was pleased with last year’s show as a celebration of a business milestone but doesn’t see showing at AAFW as an exercise for international sales.

“They’re already customers of ours and have been for a long time,” she says of buyers. “It’s great to see them in town, but it’s not a tool that we use to drive business.”

It’s a different story for Higgins, who has a growing international clientele and niche stockists but is still nurturing his label through its infancy. Watching his baby take its first steps, barefoot, down the runway, will be a long held dream come true.

“I remember watching Channel 10 news in 2004, when I was 10, and they were talking about the extravagance of Paris Fashion Week. The images were of John Galliano’s Egyptian collection for Dior. Seeing those images from that show. Well, that was it for me.”