Winning at the Game of Love

Roxann Belle and Gaspar Stinfil began playing games with each other on the night they met, in October 2017.

“I hosted a game night at my house, and though I had never met Roxann before, she was one of the guests,” said Mr. Stinfil, 34, a senior vice president for investment banking at Siebert Williams Shank & Company in Oakland, Calif.

Mr. Stinfil recalled looking through a maze of players — many paired off as teams and leaning over board games, reading game instructions or ready to hurl dice — and saw Ms. Belle standing there.

“She was gorgeous, absolutely gorgeous,” he said. ”There were so many people there, but no one stood out like she did.”

Ms. Belle, 36, a senior brand manager in Redwood Shores, Calif., for Electronic Arts, had been invited to Mr. Stinfil’s game night by a mutual friend. She had noticed its host long before he spotted her.

“He was so handsome and seemed very likable,” she said, beginning to laugh. “He looked especially good to a few girls who were hanging around him that night.”

But it was Ms. Belle, who graduated from California State Polytechnic University, Pomona, and received an M.B.A. from the University of Michigan, who got Mr. Stinfil’s attention. She took the last turn in thanking Mr. Stinfil for a wonderful evening, and after most everyone else had gone home, they exchanged phone numbers and made tentative plans to go out in the near future.

A month later, they went on a 12-and-a-half-hour first date that began with Mr. Stinfil leaving his home in Oakland to pick up Ms. Belle at her San Francisco home on a sunny Saturday afternoon in November 2017.

They drove to a wine bar, Minimo, and immediately hit it off. “Our conversation was fluid,” Ms. Belle said. “That’s always a great sign.” 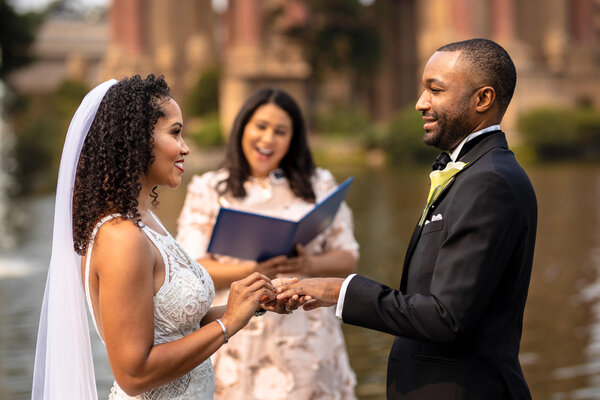 Forty minutes later, he pulled up to an airfield and had a surprise for her. “I know that you’re new to the Bay, so I figured that we could take a private plane tour so that you can get better acquainted,” he said.

Minutes later, Ms. Belle was near breathless when their private plane took off and began soaring over the Pacific.

Their first date had only just begun, with dinner to be had at Mission Chinese, to be followed by the two of them attending an Ibeyi concert, where they danced the night away in each others arms. Dave dropped her off at her apartment after the concert, and they went out again the next day.

They were married Oct. 1. by Mayor London N. Breed at City Hall in San Francisco, five months after their originally scheduled May 1 wedding there was wiped out by the coronavirus.

“After that first date,” the bride said, “we both knew that forever had just begun.”