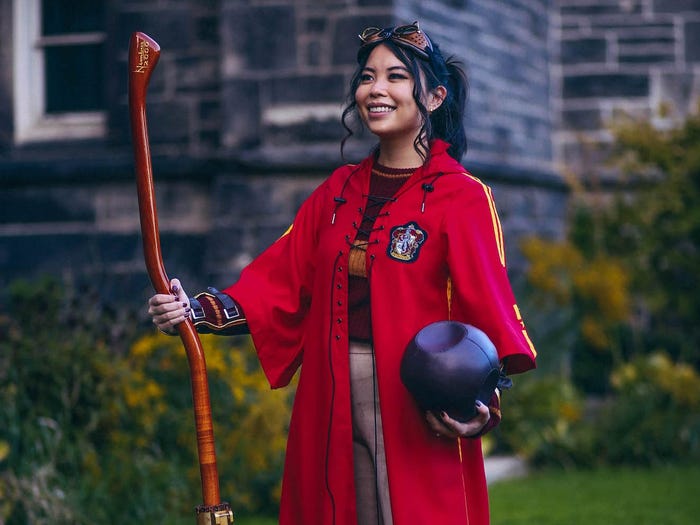 Spanning seven books and eight movies, the "Harry Potter" series is filled with characters you could dress up as for Halloween.

Of course, Hogwarts robes make for classic costumes, but there are plenty of options for those looking for something a little more unique. One idea is to dress as your favorite character in their Quidditch uniform rather than their school clothes. You could also wear an outfit inspired by your favorite magical snack from the wizarding world — like chocolate frogs.

Here are 17 standout costumes inspired by "Harry Potter" to provide you with some inspiration.

You're sure to standout by dressing as a box of Bertie Bott's Every Flavour Beans. 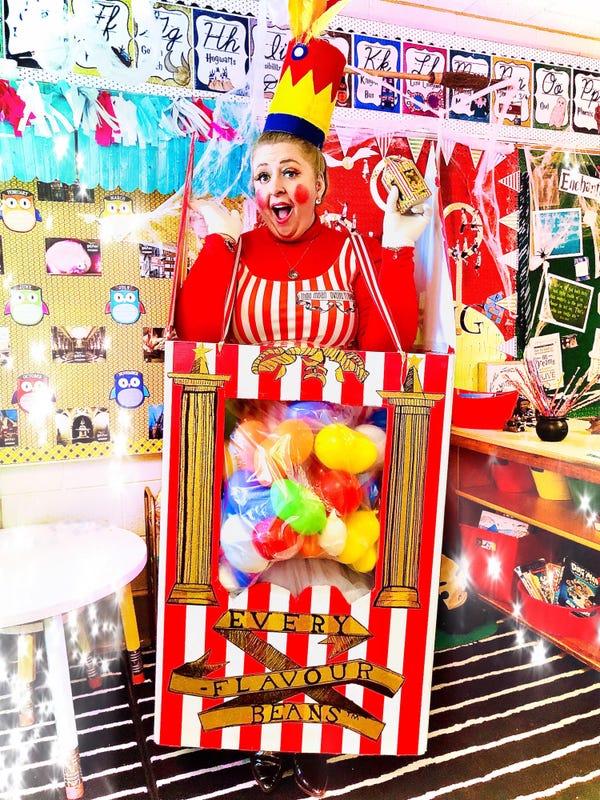 The candy was famously introduced in the "Harry Potter" series by Ron Weasley, who explained that the jelly beans can range in flavor from chocolate to liver.

Bailey, a teacher who goes by Magic Wand Blonde on Instagram, turned the magical candies into a Halloween costume in 2019. To do the same, you can make a similar carton out of cardboard and duct tape, fill it with balloons as jelly beans, and then do your makeup to resemble the character on the front of the box.

Similarly, you can take inspiration from the jumping, chocolate frogs that Harry and Ron purchase on their first train ride to Hogwarts. 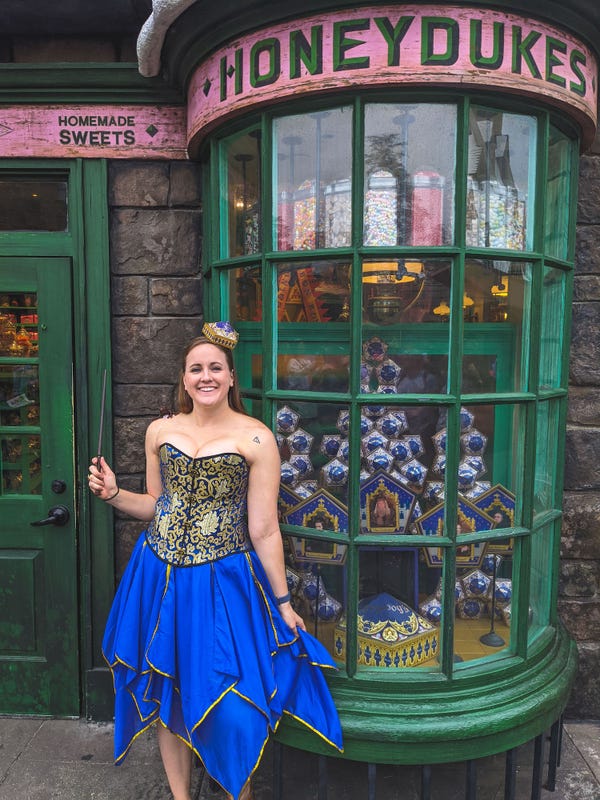 Being able to safely revisit @universalorlando is going to be such a sweet moment! 🍫 Until then, I've found so much solace in revisiting old trip photos and applying new editing skills to them that I've learned while sitting at home. Swipe to see the picture I posted at the end of January for a comparison ➡️ Lately I've been trying to shift my perspective on 2020 from being a travel-ruining bummer to being a well-needed time of self-exploration. It's been life-changing to realign myself with things, like photography, that make me feel fulfilled while peeling away the layers that don't serve my happiness 🌟 I acknowledge that this year has been a rollercoaster of emotions and if you're feeling some that aren't super great right now, I'm sending all my love and lumos to you 💙 Let's do a little Honeydukes this or that! ⬇️ Chocolate frog or Bertie Botts / peppermint toad or fizzing whizbees / butterbeer or pumpkin juice? ✨

One way to do so is by following in the footsteps of Brandy, who goes by SimplyPotterGirl on Instagram. She previously created a strapless, chocolate-frog-inspired dress made with fabric that resembles the blue-and-gold candy boxes seen in the "Harry Potter" films.

She also carried a wand, and wore a replica of the box — which can be purchased from the Wizarding World of Harry Potter theme parks — on her head.

School robes can be overdone. Consider dressing as a student from another wizarding school instead. 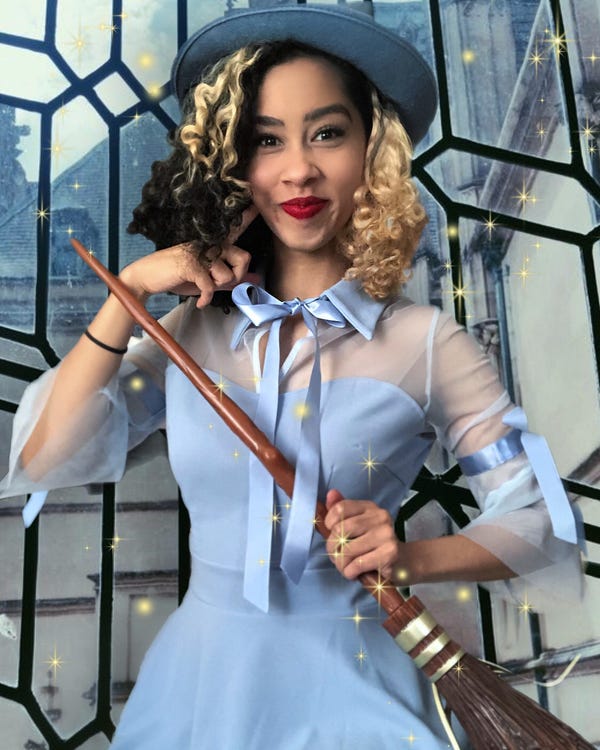 Wizarding schools including the Durmstrang Institute and Beauxbatons Academy of Magic are introduced in "Harry Potter and the Goblet of Fire." Students from the schools are also seen in the film adaptation of the fourth novel, providing great inspiration for your next Halloween costume.

Cosplayer Our Shield Maiden recently dressed as a student from the latter school. To make a similar costume at home, you can pair a baby-blue dress with a short, matching shawl. From there, you'll need tights, short blue heels, and the school's signature hat.

If you do want to represent your Hogwarts house, you can dress like a student from a former decade. 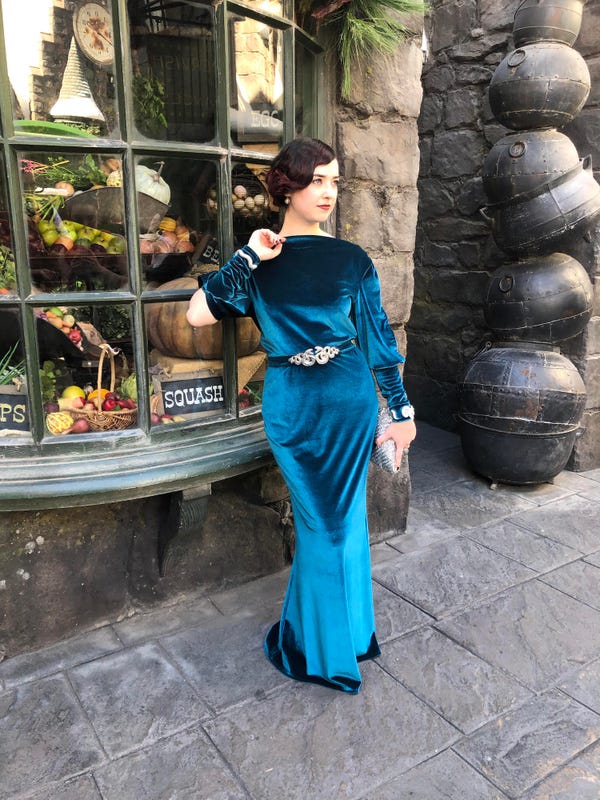 No progress I can show right now, so here’s some throwback to my 1930s Slytherin look! 🐍🖤

Lauren, who goes by The Cosplay Historian online, previously showed what a member of Slytherin might wear in the 1930s. Her look included a floor-length velvet dress, a snake-shaped belt, small earrings, and a curled, bob hairstyle.

Of course, you can dress as a Hogwarts student from any decade for Halloween — like a Gryffindor student in the '80s, or a member of Hufflepuff in the '70s.

Halloween is the perfect time to represent your favorite, magical shop. 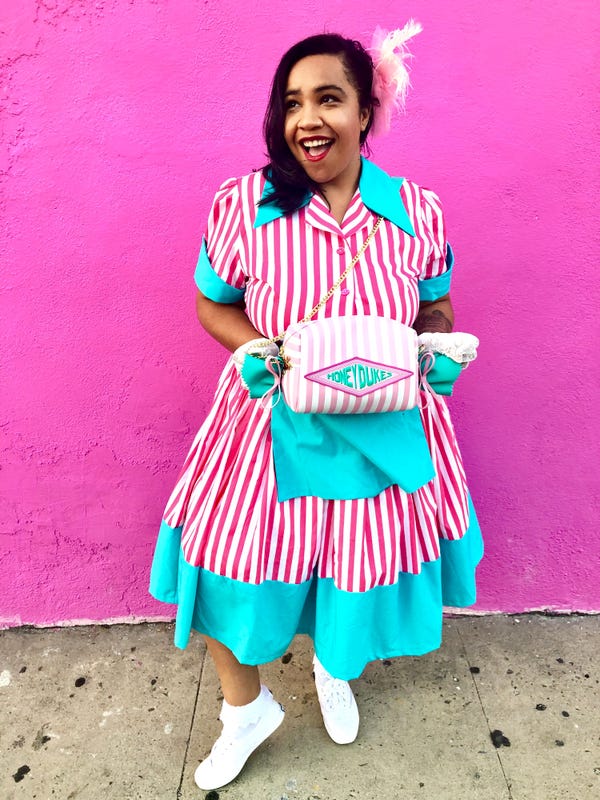 Honeydukes is one of the most recognizable stores from the series. Kat, who goes by @kathleezzzy on Instagram, created the perfect outfit to look like a clerk of the candy store in the '40s.

She wore a pink-and-white striped dress, short gloves, white sneakers with ankle socks, and feathers in her hair. She also carried a purse with the Honeydukes logo on it.

You can also take inspiration from other magical businesses like the Leaky Cauldron, Weasleys' Wizard Wheezes, Gringotts Wizarding Bank, and Ollivanders.

Don't forget about the ghosts of the wizarding world. 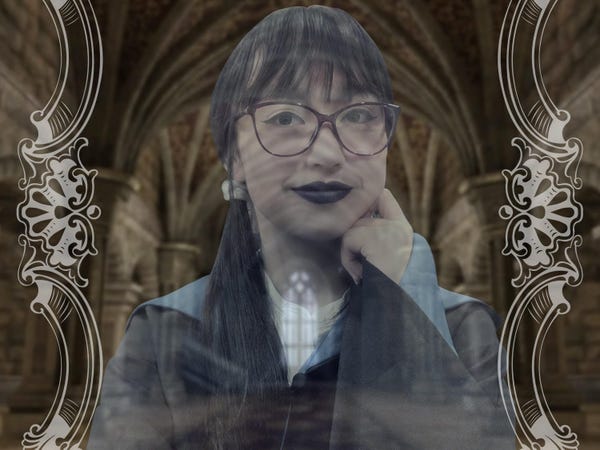 Myrtle Elizabeth Warren, more commonly known after her death as Moaning Myrtle, was a Muggle-born witch who attended Hogwarts from 1940 – 1943 and was sorted into Ravenclaw. She was killed in 1943 by a Basilisk, under Tom Riddle's orders. After the incident, she became a ghost who haunted the second-floor girls’ bathroom (and occasionally other bathroom facilities) at Hogwarts. ~ Another wizarding challenge! After our Chocolate Frog Cards, we’re doing #WizardingWorldGhosts . I bring to you Moaning Myrtle, to whom I might resemble a little bit but do not relate to 🤪. Would you like to be a ghost after you die? And stay at Hogwarts haunting students? I think that could be fun, meeting new people, talking about my experiences, and hosting Ghosts parties! ~ #MagicalKnittedLetter #MasterfulMagicalMinorities #WizardingWorldStyle #TheWizardLifestyle #fantasticbeasts #harrypotterfan #harrypotterworld #wizardingworld #harrypottercharms #harrypottermerchandise #potterfan #harrypotteraesthetics #ilvermorny #yerawizardharry #yerawizard #potterphotorephy #magicalmischief #spookyvibes #hogwartsismyhome #ghoststories #hogwartsghosts #hogwartsghost #nearlyheadlessnick #thegreylady #peevesthepoltergeist #moaningmyrtle #myrtle #hauntedhogwarts

Moaning Myrtle is a fan-favorite ghost from the "Harry Potter" universe, but you don't often see people dressing as her on Halloween. Like Vicki, who goes by Magical Knitted Letter online, you can wear Ravenclaw robes and a white shirt to channel the character.

You'll also need to tie your hair into pigtails, and wear black-rimmed glasses. You might even want to wear gray or blue makeup to look more like a ghost. If you prefer a different ghoul, consider Nearly Headless Nick or The Bloody Baron.

There's more than one way to dress as Hermione on Halloween. 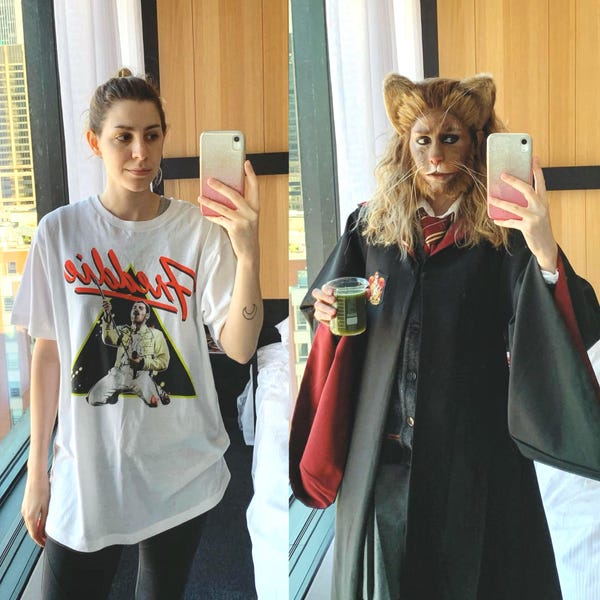 While Hermione's Gryffindor robes are classic, you could put a unique twist on the costume by pairing them with cat-inspired makeup and a beaker filled with green juice — mirroring the "Harry Potter and the Chamber of Secrets" scene when Hermione drinks Polyjuice Potion and partially turns into a cat.

Cosplayer Aileen of Instagram account A Little Android did just that for a convention in 2019 using special-effects makeup. If you aren't skilled with prosthetics, you could also throw on a cat-ear headband, and draw whiskers across your face for a similar effect.

Professor McGonagall also has a variety of looks to choose from. 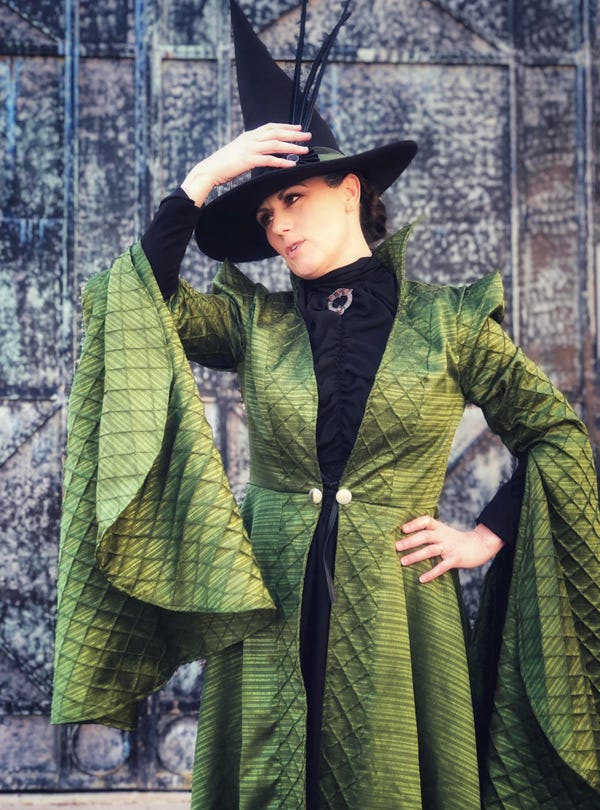 The Hogwarts professor is most widely recognized in her black robes and tall witch hat. However, she wears green robes with bell sleeves to the Yule Ball — and they make for an eye-catching Halloween look.

Sheila Echols-Smesny, who recently dressed as Professor McGonagall, created a step-by-step guide on her website for creating the costume at home. You'll need fabric, scissors, a sewing machine, and more.

If you decide to be Bellatrix Lestrange, you can put your own twist on her eccentric look. 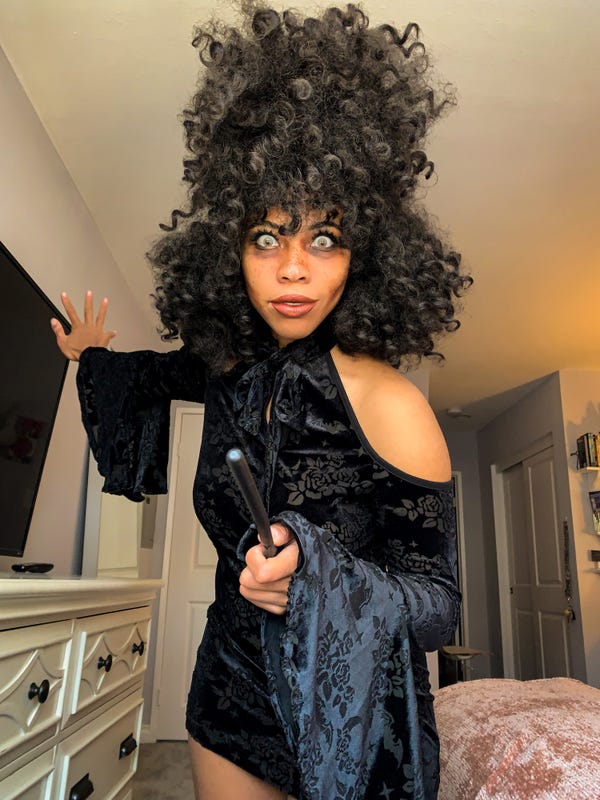 a #closetcosplay of Bellatrix Lestrange 🖤💀 What Hogwarts house are you?! Personally, I’m prettyyyyyyyyy sure I’m Ravenclaw 😛 ..and don’t make fun of my makeshift wand, i misplaced mine lol

Kiera Please, an influencer and cosplayer, dressed as the villain in July. But rather than wearing Lestrange's floor-length dress and skull-shaped necklace, she donned a velvet minidress with bell sleeves and a bow around the neckline.

For a similar look, pair your favorite, all-black ensemble with a wand, and the character's signature curly hairstyle.

To live out your dreams of playing Quidditch, try dressing as one of the magical athletes on Halloween. 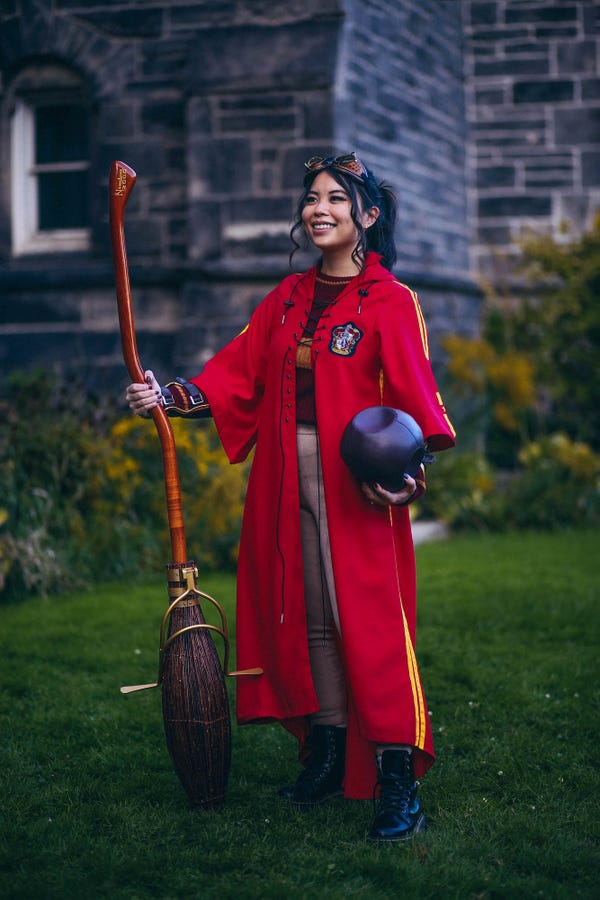 Candes of The Wizarding Sibs on Instagram recently created this Gryffindor Quidditch look. It includes a maroon sweater, khaki pants, a Quidditch robe, combat boots, and goggles. She also carried a broomstick and a Quaffle ball.

Of course, there are numerous Quidditch positions to choose from, so you could dress as Seeker or Beater instead. You also could choose to dress as a Quidditch player from an international team — as mentioned in the fourth "Harry Potter" book — rather than one from a Hogwarts team.

Draco Malfoy might be popular on TikTok right now, but his dad Lucius is far more underrated. 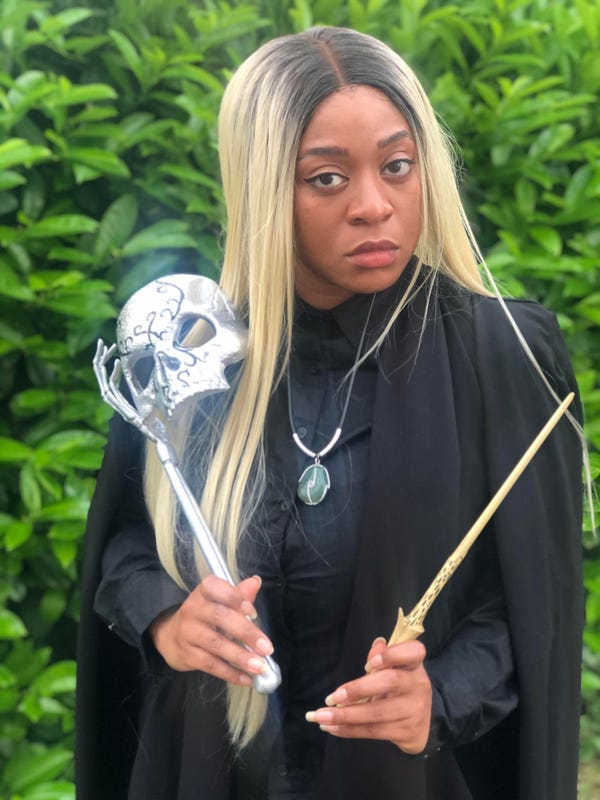 At the time of writing, "thirst videos" inspired by Draco Malfoy are all over TikTok. That being said, costumes inspired by the character will probably be popular this Halloween — so you might want to dress as another member of the Malfoy family.

Zan, who goes by Baffling Basilisk on Instagram, can provide the perfect inspiration for such a costume. The cosplayer dressed as Lucius Malfoy, Draco's dad, using a black cloak, matching button-up, and a long, blonde wig. You'll also need a wand and silver skull mask for a similar costume.

Instead of dressing up as Snape, you can replicate one of his less conventional outfits on Halloween. 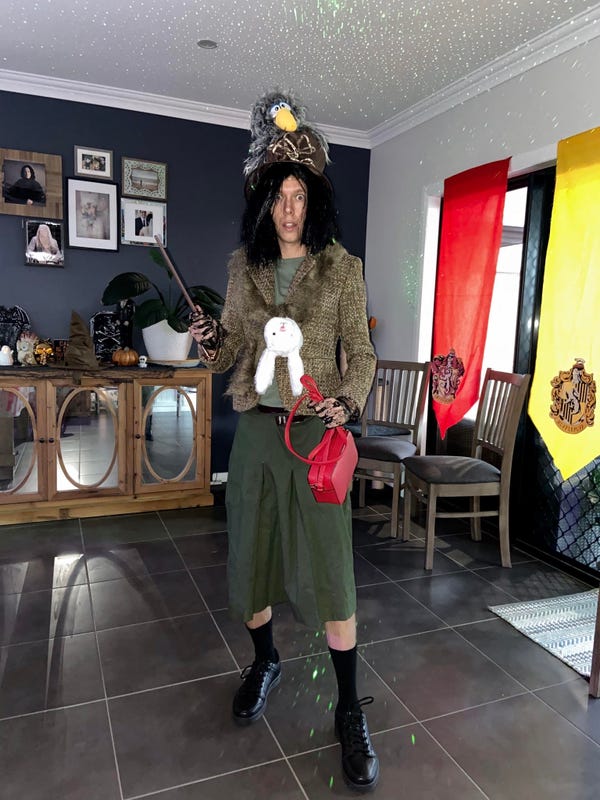 In the "Harry Potter" universe, Boggarts are shape-shifting illusions that represent your biggest fear. Neville Longbottom's Boggart, for example, is Professor Snape dressed in his grandmother's clothes.

Last Halloween, Jamie Andrews replicated the look for his Halloween costume. You can do the same by utilizing a green skirt, tweed jacket, a bird-embellished hat, and an animal-shaped scarf.

Dressing as Professor Trewlany gives you the perfect excuse to recite famous lines from "Harry Potter and the Prisoner of Azkaban" all day. 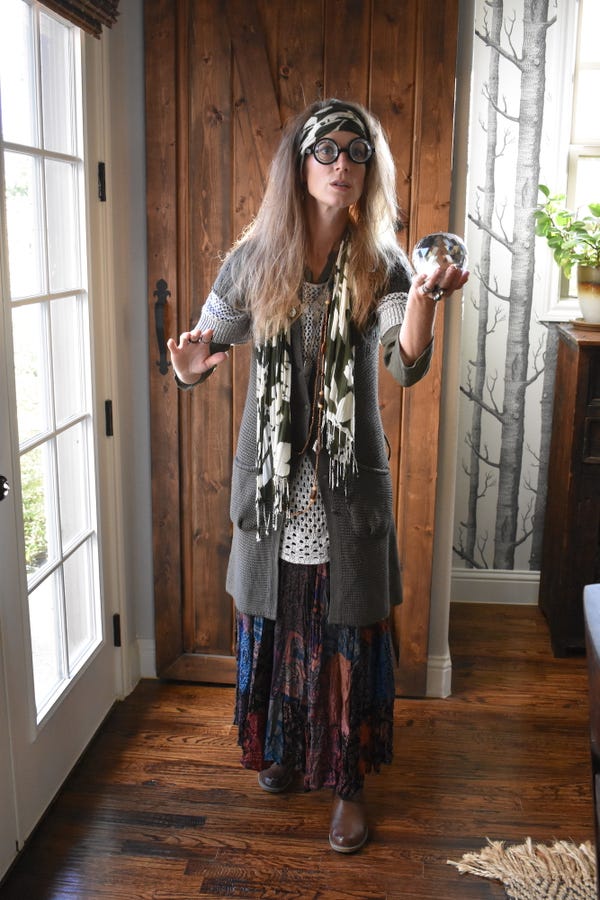 Professor Sybill Trelawney is first introduced in the third "Harry Potter" book and movie. In the latter, she's known for reciting now-iconic lines like: "My dear, you have the Grimm!"

To channel the character on Halloween, follow the lead of Sarah Ryan Renner. She wore layered clothing, brown boots, a headscarf, and circular glasses to match the professor last year. She also carried a crystal ball.

Molly Weasley has one of the most whimsical wardrobes in the entire "Harry Potter" series. 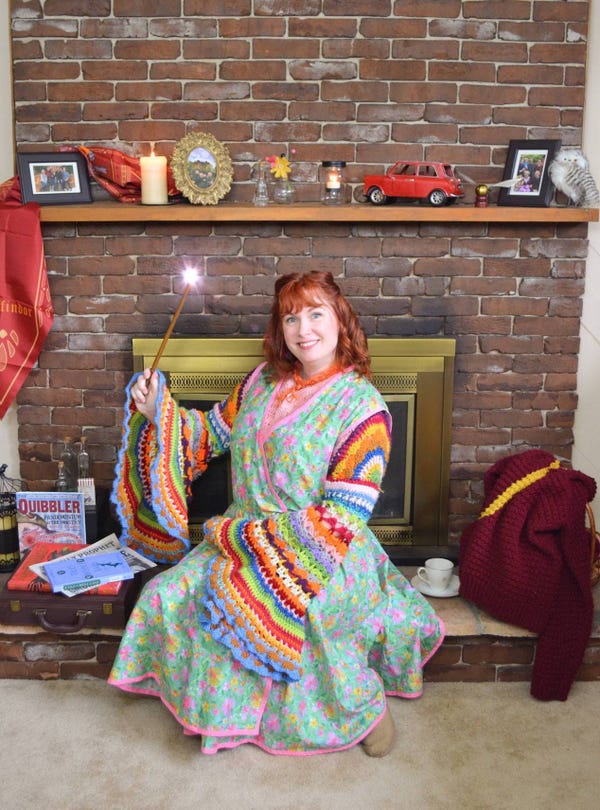 I finally managed a bit of a photo shoot with my #mollyweasley #cosplay and I’m happy with how it turned out! As a reminder, each piece I’m wearing (with the exception of the shoes) was hand made by me (and so was the Quibbler!) 😄 I love being able to do an homage to a character who means so much to me! Weasley is our queen! 👑 #harrypotter #wizardingworld #wizardingworldorlando #sweepstakes #crochet #theweasleys #weasley #wand #potterhead #harrypotterfan #harrypotterlover #hpforever #harrypottermovies #harrypotterfandom #redheartyarn #ginger #gingerhair #crafts #homemade

An artist who goes by Joonuper online represented the character perfectly with her costume. She wore a knitted top, a floral smock, and her red hair in curls. She also carried a wand with her, just as the character does throughout the series.