A refreshing nip of Hamlet served straight up

Whether we're talking audiences or performers, lovers of Shakespeare haven't been spoilt for choice in Melbourne lately. There have been some dashing, cinematic productions from Simon Phillips at the Melbourne Theatre Company – but the major company dedicated to the Bard's work, Bell Shakespeare, has proved notoriously unreliable under Peter Evans and the standard of acting (especially in touring shows) is often enough to embarrass and depress. 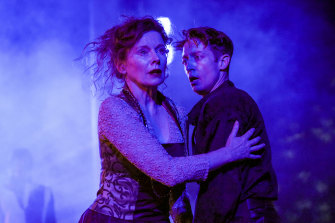 In those circumstances, it is perhaps unsurprising that Glenn Elston's al fresco Shakespeare in the Royal Botanic Gardens has begun attracting higher quality casts. It's certainly the case with this year's Hamlet, which possesses a field of talent of some depth and delivers an enjoyable and solid – if heavily abridged and no-frills – version of what is arguably Shakespeare's greatest tragedy.

You might not automatically warm to Andre de Vanny as Hamlet. He's a bit tall on self-dramatising torment, a bit short on self-deprecating charm, and could benefit from that portion of his character's advice to the players which advises restraint: "In … the whirlwind of passion," Hamlet tells his actors, "you must acquire and beget a temperance that may give it smoothness."

That isn't to deny de Vanny handles the verse with ease, just that he could wring more subtlety from it by being less consistently heightened in his approach.

On opening night, Mark Wilson understudied Claudius (to be played through the season by Greg Stone) with a slightly hammy touch, but an otherwise impressive command of text and technique. His time spent studying with Britain's Royal Shakespeare Company clearly shows. Watching Alison Whyte's poised Gertrude crack is a compelling sight, in a performance that makes an admirable companion to her Lady Macbeth with the company last summer. 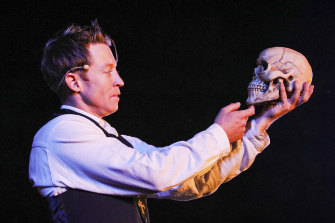 Brian Lipson makes a spry Polonius – part clown, part critic, part courtier – effortlessly capturing the humour, while Emily Goddard's sympathetic Ophelia is persuasive and understated, at least until the bedraggled hysteria of her unforgiving mad scene. Andrew Coshan as Laertes has natural instincts for Shakespeare, even if the character doesn't achieve full elaboration due to scene cuts.

Shakespeare's poetry is in safe hands with a supporting cast that includes Dion Mills – whose resonant diction is perfect for the ghost – and Syd Brisbane, who milks nothing as the Gravedigger.

It's refreshing to see a production that doesn't try to sex up Shakespeare or compromise the drama with patronising buffoonery.

By delivering the guts of the play, by doing it "straight", this Hamlet achieves more with less, and focuses squarely on the talent of its performers and the beauty and complexity of Shakespeare's language.