Last week, we suddenly lost one of the most intelligent, joyful, hilarious genuine human beings to ever walk the earth, and one of the country’s greatest food writers. His name is Darrell Beveridge, but you might know him as Cook Suck.

If you aren’t familiar with Cook Suck, it was a disruptive and deeply unhinged food blog, where Darrell gave priceless commentary on submitted images of horrific-looking food. The language was manic and irate, the commentary was nihilistic and lawless. His summaries were an anarchistic reaction to the way societal expectations intersect and clash against the way we live and consume food. 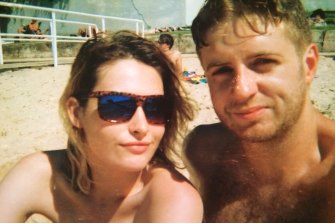 I fell in love with Darrell during the burgeoning glory years of his food blog and I bore witness to the creation of many of these now-iconic posts.

Here’s how they would usually come into existence: we would stumble home from the pub, steaming drunk – this was prime writing time for Darrell. He’d sit there chain-smoking hand-rolled ciggies and drinking cleanskin red wine, feverishly typing his new post, giggling maniacally to himself.

Some of Cook Suck’s greatest hits include: his post about Scott Morrison’s “strong” curry, his evisceration of this butter chicken sandwich, this incredible review of a hip hop-themed poke bar in Bondi Junction, his diatribe about bacon and anti-Muslim dogmatism, his rant about “man caves”, or my personal favourite, when he spouted off about New Year’s resolutions (“jog, jog, jog – what are you jogging from? The ghosts of your past?” still makes me laugh out loud to this day). His Twitter and Instagram would also make you laugh out loud constantly.

The innate beauty of Cook Suck was that Darrell punched up, not down. While other food critics made a living reviewing restaurants most Australians could never afford, Cook Suck punched straight back up at those institutions and the societal barriers that keep it inaccessible to the average person. Darrell had an incredible ability to pinpoint, within a simple photo of food, the inadequacies of societal norms keeping us from a fair and equitable world.

He glorified the meals of everyday people – he was making light of us all, himself included. If someone’s dinner was a sale price Woolies hot chook and home brand white bread, Cook Suck would bring people together in celebration of this Aussie rite of passage (in fact, Darrell loved rotisserie chicken so much he had an image of one with the words “hot chook” tattooed on his ribs).

Darrell lived what he preached. When Darrell’s jerky company The Darling Jerky Co. was targeted by anti-halal protesters, he refused to back down and pander to bigotry, and instead chose to punch back up. He told me, “I’ve had enough of the anti-Muslim sentiment in Australia under the guise of being Australian.”

Darrell created what is arguably the country’s best-known food blog completely anonymously. He hated ego and pretension more than anything else: his favourite pubs were the oldest and emptiest, his favourite food places were mum-and-pop joints that most food critics would never deign to set foot in. His humility was his strength, and it allowed him to develop the largest and most varied food knowledge of anyone I have ever met. I could have listened to him wax lyrical about food forever.

Darrell was one of a kind, in a way that I don’t think I’ll ever be able to truly explain. His zest for life and all its pleasures wasn’t just for his own satisfaction, it was because he wanted to help everyone around him feel pure joy.

The great musician Nathan Roche said it best to me: “[Darrell and I] spoke a bit about how Shane Warne [after he died] transcended what it meant to be a public figure; he became something of a saint. I can confirm Darrell Beveridge was also something of a holy figure — he enriched the lives of those that met him, and taught them how to live and be merry.”

In loving Cook Suck, we agree to question and demand better of the institutionalised and societal norms we have to live with. In loving Darrell, we agree to savour each day as best we can, and bring joy to others as well as ourselves.

In his death, Darrell has left a euphoric stamp on the world to remind us that lust for life is possible and accessible. To honour the effervescent legacy of Darrell Beveridge, and indeed, Cook Suck, let us remember to only ever punch upwards, question everything, love with reckless abandon, and always say yes to another pint.