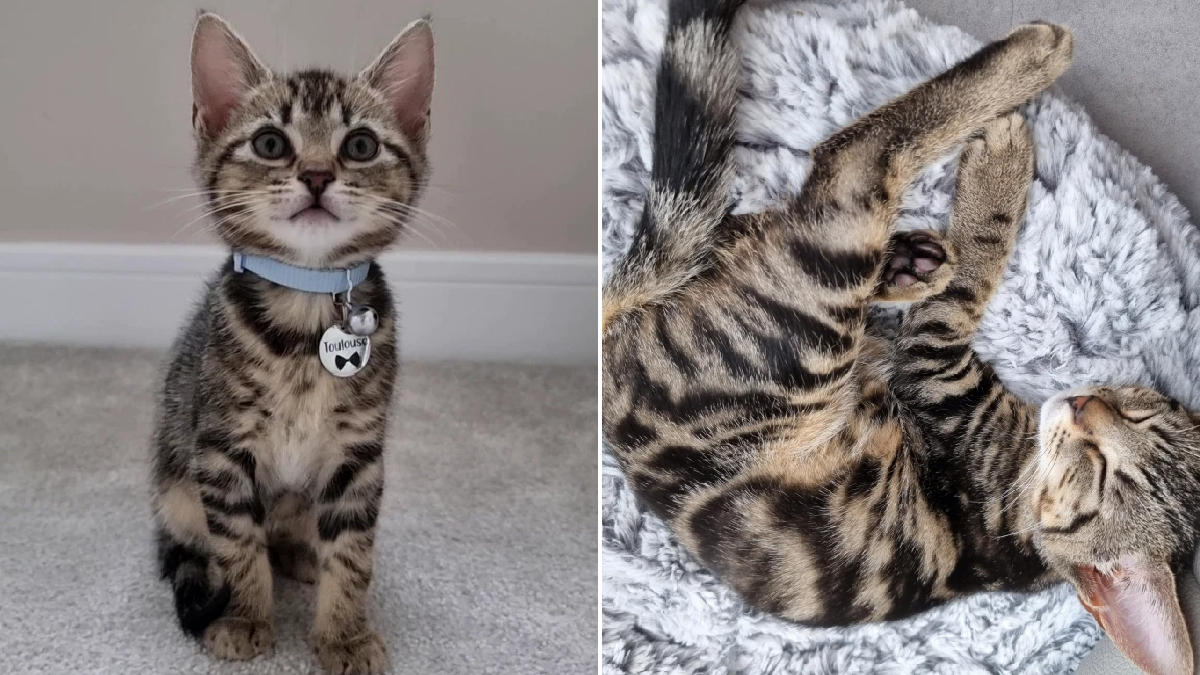 Toulouse the tabby had a rather rough start to his life.

The adorable kitten was given just a 1% chance of survival after he was born without an anus – which left him unable to go to the toilet.

This highly unusual condition meant that Toulouse was only expected to survive a few hours – but, incredibly, the little cat made it eight weeks before it was spotted.

And, after undergoing critical surgery, he’s now a thriving four-month-old.

Although – due to his malformed genitalia – vets are still unsure whether he’s a boy.

Toulouse’s owners Nadia Kleisa and Tom Hooper, from Wakefield, first noticed something was wrong shortly after receiving him at two months old – along with his sister Mila.

After taking him to a Vets4Pets practice, they were shocked to discover the feline’s condition and were surprised he had survived for so long.

Nadia said: ‘At first Toulouse and Mila seemed to be settling into their new home but, having grown up with cats in my house, I was keeping a close eye on both of them to make sure everything was OK.

‘And when he made a couple of attempts to go to the toilet in the litter tray and nothing was coming out, we became really concerned for him.

‘They [the cats] arrived in the early evening and after he showed no signs of improvement overnight, we took him straight to Vets4Pets.

‘From there, things escalated very quickly and we felt devastated that our beautiful kitten was unlikely to survive.’

Vets told the couple they needed to operate immediately and this was the only option for the cat’s survival – although risks were still very high.

The surgery to give Toulouse a new bottom, and attach his colon to it, is rarely carried out in the UK – and it was only the second case vet Chris had seen in 28 years.

Thankfully, the procedure was a success.

Nadia said: ‘We couldn’t quite believe the miracle Chris and his team at Vets4Pets Castleford had performed, but knew Toulouse now had weeks and months of recovery ahead of him.

‘It had been a huge rollercoaster of emotions in the 24 hours we’d had him, but at least he was still with us and his sister.

‘I didn’t expect him to survive the first night as he was still so tiny, so just stayed with him all night and watched over him.’

After feeding Toulouse white fish, chicken and scrambled egg, the couple were thrilled to see him do his first poo 36 hours later – an indication that the operation had worked.

Nadia said: ‘Tom and I were so relieved and couldn’t stop smiling.

‘Remarkably he was soon back to being a playful kitten and enjoying time with his sister.

‘Over the next few days and weeks, we gradually replaced his diet with normal cat food and have been back to see Chris at Vets4Pets Castleford on a weekly basis.

‘We’re so grateful to everyone at Vets4Pets Castleford – they have all helped when we needed them the most and we’ll never forget what they’ve done.’