Australian Federal Police Commissioner Reece Kershaw says he is concerned an inquiry being undertaken by Australia’s top public servant into a rape allegation made by former Liberal staffer Brittany Higgins will hamper the police investigation into the matter.

Scott Morrison has asked his department head Philip Gaetjens to check on whether his office was alerted to an alleged rape after contradictory claims about when those close to the Prime Minister were alerted.

Asked in Senate estimates on Monday whether Mr Gaetjens should pause the investigation, the AFP boss said: “My view is that’s a matter for him… to my knowledge I don’t have access to that material so that is a matter for the secretary.” 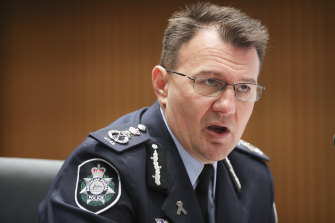 Since going public last month, Ms Higgins has gone back to ACT Policing, which is part of the AFP, to make a formal complaint about the alleged rape inside Defence Minister Linda Reynolds’ office by a colleague in March, 2019.

Mr Kershaw said he was concerned about a number of inquiries sparked by the allegation including Sex Discrimination Commissioner Kate Jenkins’s review into Parliament’s workplace culture and the probe being undertaken by Mr Gaetjens. 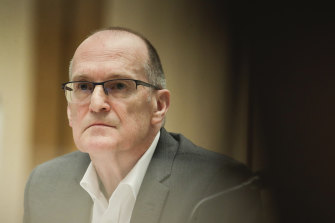 Phil Gaetjens, Secretary of the Department of Prime Minister and Cabinet, has been tasked with conducting his own inquiry.Credit:Alex Ellinghausen

He said he had spoken personally with Mr Gaetjens because he was “particularly concerned about the intersection of his inquiry with our investigation”. The AFP Commissioner said Mr Gaetjens’ review “may” hamper the police investigation.

“I have communicated to those responsible the primacy of the criminal investigation and letting it run its course,” he said.

“I have seen it before… where people might have good intent, but you can actually interfere with that investigation.

“For example, even matters reported in the media can affect a fair process to be undertaken or prejudice an outcome, or provide bias one side or the other.”

Mr Kershaw said he had not asked the Department of Prime Minister and Cabinet secretary to stall or pause the investigation. “That’s a decision he may wish to take… based on the conversations I have had as far as any intersect with our criminal investigation.”

He said he was limited in what he could say about the AFP’s criminal investigation to ensure it was not compromised.

“The allegation is serious and the AFP, through ACT Policing, is investigating this matter, and it is being treated with due care and attention including with oversight by our Sensitive Investigations Oversight Board,” he said.

Mr Kershaw said he wanted to make clear that “the AFP has zero tolerance for violence and abuse”.

“In the context of events and public discourse in recent weeks, both in Australia and overseas, it is important for me as the federal police commissioner to call out and denounce in the strongest terms the prevalence of violence, abuse, harassment and intimidation in our community, and in particular against women and the vulnerable. It is unacceptable,” he said.

Senator Ryan on Monday morning said he couldn’t answer questions about Ms Higgins’ allegation in a minister’s office in March 2019 on the grounds it could “complicate” police investigations and potential legal action.

He cited advice former clerk of the Senate Harry Evans gave in 2002 that information given under parliamentary privilege may be “unexaminable in any legal proceedings”.

“At this point, because of the advice I’ve just read out, I am reluctant to place in Hansard any details that may be the subject or related to a police investigation underway,” Senator Ryan told the estimates hearing. “I do not want to potentially prejudice, complicate or otherwise impact on an active police investigation.” 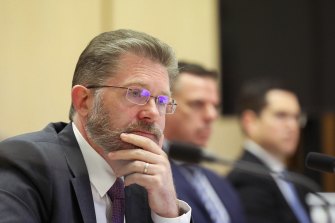 President of the Senate Scott Ryan said he did not want to compromise the police investigation.Credit:Dominic Lorrimer

Labor’s Senate leader Penny Wong said the scope of what he claimed was “beyond precedent” while manager of opposition business Katy Gallagher said Senator Ryan should seek a formal public interest immunity claim to avoid the questions.

“Essentially what you’re saying to the estimates committee is that you will not answer any question about anything related to the alleged rape in a minister’s office at all,” Senator Gallagher said.

“It is a very grave situation and, of course, no one wants to jeopardise any police investigation but we also don’t want to facilitate a lack of information about a woman who came to work, or who worked in this building, and how the operations of this building and who did what when and what’s happened since, be not answered.”

After estimates committee members held a private discussion about this approach, Senator Ryan undertook to take the questions on notice and see what he could answer without prejudicing investigations.

Labor senators asked a series of questions about when Senator Ryan and parliamentary officials became aware of the incident and the allegations of sexual assault, and when they granted police access to CCTV footage.

Senator Ryan said he would take advice from the clerk of the Senate and potentially from police as to what he could say.

Senator Ryan said he had not spoken with Mr Gaetjens about the Higgins matter.