The aged care sector will meet with ministers next week to discuss chronic workforce shortages as providers wait for more details about how an anticipated multibillion-dollar package to fund wage rises will work.

The Fair Work Commission is considering a case brought by unions for a 25 per cent pay increase for aged care workers and nurses, with a decision expected in the summer. 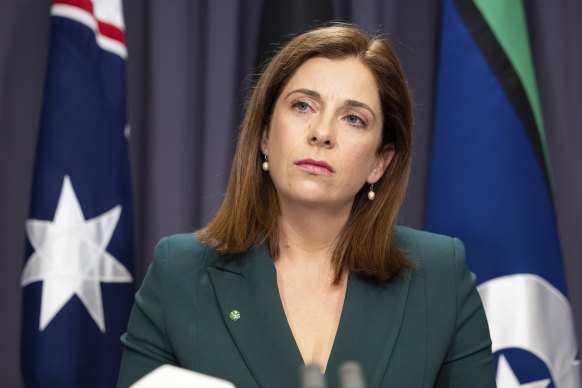 Aged Care Minister Anika Wells will meet with representatives from the sector next week to discuss workforce shortages.Credit:Alex Ellinghausen

Employer groups have agreed staff need a sizeable increase but oppose making it as high as the union bid, while the federal government backed a “significantly higher” pay rate in its submission to the commission on Monday without nominating a figure. It also recommitted to fully funding any increase.

Aged Care Minister Anika Wells said on Tuesday the cost of not acting was too high.

Wells said the government had “lots of different modelling” around the likely cost of a wage rise but ultimately it was for the commission to decide the percentage and there would then be negotiations over how to roll it out.

“We’re preparing, I guess, for all eventualities, but until we have the figure from the commissioner, and what figure he’s attributing to different sections of the aged care workforce, it’s all hypothetical,” she said.

Tim Hicks, general manager of policy for the Aged and Community Care Providers Association, a peak body for the sector, said the government’s submission was welcome, but only a first step.

“There will need to be further work on the details of how the funding is going to be made available to ensure that aged care providers can pass on a wage increase to all of their staff,” he said.

Much would depend on the details, such as whether the government would fund wage rises for people already paid higher than award rates.

The government has said it wants everyone in the sector to receive a pay rise.

United Workers Union aged care director Carolyn Smith said the government’s inclusion of its promise to fully fund the increase in its FWC submission was powerful and should reassure employers and the commission considering the potential impact of large pay rises.

Next week’s roundtable meeting in Canberra will feed into the government’s jobs and skills summit at the start of September.

Research by the University of Notre Dame for Catholic Health Australia in April found there were more than 45,500 vacancies for qualified aged care workers across the sector. It was also short 1760 registered nurses, a situation that will only be exacerbated by the government’s plans to mandate that every residential facility have at least one registered nurse on-site at all times from mid-2023.

CHA’s aged care director, Jason Kara, said the fully funded wage increase was “probably the most important piece of the workforce shortage puzzle” but not the only one.

“With nearly 50,000 jobs unfilled in the aged care sector, we’ll also need to move fast on other initiatives like better training and career prospects, as well as opening up pathways for bringing workers into Australia,” he said.

Wells recognised the problems had been a long time in the making and could take a while to unpick, saying, “These aren’t new workforce shortages. These aren’t newly underpaid workers.”

Opposition finance spokeswoman Jane Hume agreed it was necessary to have higher wages to attract more workers to the sector but questioned whether it would “destroy the industry by having disproportionate wage rises” and said the government should be leaving the commission to make its own decisions.