An aged care worker who was sacked for refusing a flu shot has failed to get her job back after the national industrial tribunal ruled her employer had correctly followed government health directions.

The decision is the second by the Fair Work Commission in recent weeks to back an employer who sacked a staff member for turning down a flu vaccination. 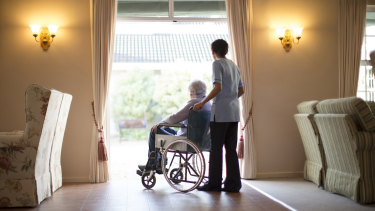 An aged care worker failed to show what she said was an allergic reaction had been caused by a flu shot.Credit:Getty Images

Jennifer Kimber, who had done clerical work at the community-owned Imlay House aged care home on the NSW far south coast town of Pambula since 2008, lost her job in July after declining the flu vaccine.

Sapphire Coast Community Aged Care, which employed Ms Kimber, insisted she have a flu shot because a state government directive ordered people without one to stay out of aged care facilities unless they had a medical exemption.

The same rule has not been applied to coronavirus vaccines, which are still being rolled out across the country, except in the case of some healthcare workers in Queensland.

Ms Kimber told the Fair Work Commission she had refused the flu shot because the last time she had one in 2016 she had suffered a severe allergic reaction, including a rash and swelling on her face and neck. She took a steroid medication, saw a practitioner in Chinese medicine and wore a copper-infused towel as a scarf to manage the rash, which remained for 10 months.

She said she was covered by a medical exemption because of her reaction, providing a letter from the Chinese medicine practitioner who saw her when she had the rash, and a traditional doctor, who had seen her only later.

However, Fair Work commissioner Donna McKenna ruled on Friday Ms Kimber had not shown her reaction was caused by the flu vaccine.

“There was no medical evidence whatsoever of a contemporaneous diagnosis that the condition as described was attributable to the 2016 flu shot,” Ms McKenna said.

“My conclusion … tends strongly to favour the correctness of the stance taken by the respondent in relation to the applicant concerning the flu shot issue and its adherence to the CMO [Chief Medical Officer’s] advice concerning contraindications to influenza vaccination.”

Professor Denis Wakefield, who specialises in immunology and was formerly head of the University of NSW School of Medical Sciences, testified on behalf of Sapphire Coast Aged Care that it was not likely Ms Kimber’s rash was caused by a flu vaccine.

Ms Kimber’s lawyer, Nathan Buckley, who has represented at least one other woman fired for refusing a flu vaccine, said she would appeal against the decision. That could set up a test case on how much medical evidence is required before someone can opt out of a vaccine.

Sapphire Coast Aged Care chief executive Matt Sierp said the commission’s decision spoke for itself. He said he had followed public health orders and advice from federal officials including the Chief Medical Officer at the time.

Prime Minister Scott Morrison said in February he did not expect advice that it was not necessary to require healthcare workers to have a coronavirus vaccine to change but did not rule it out.

“The Australian way is for this to be non-mandatory,” he said.