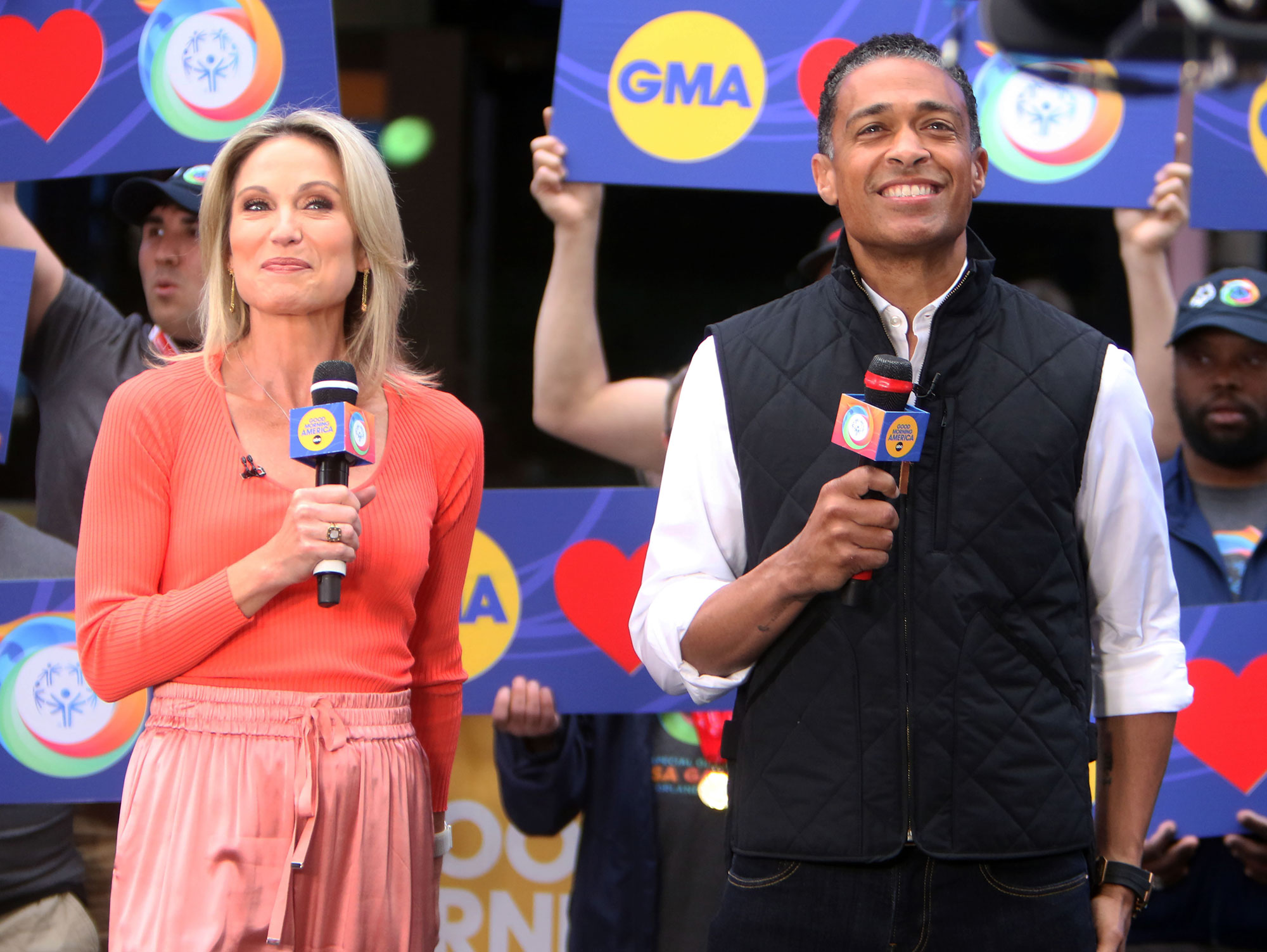 Out and about. Amy Robach and T.J. Holmes were spotted grabbing drinks together amid their ongoing suspension from GMA3: What You Need to Know.

The 20/20 cohost, 49, and the former CNN reporter, 45, arrived separately at The Full Shilling bar in New York City on Monday, January 23, in photos obtained by the Daily Mail. Robach was dressed casually in workout leggings, sneakers and a black puffer jacket, while Holmes wore jeans and a hoodie under his raincoat.

Once inside the pub, the pair reportedly sat in one of the bar’s “snugs” — a private, enclosed seating area with a door.

Robach and Holmes’ relationship was made public in November 2022 after they were spotted getting cozy outside of the Good Morning America studio while married to other people. The Georgia native wed Andrew Shue in 2010. Holmes, for his part, tied the knot with Marilee Fiebig in March 2010.

Last month, Us Weekly confirmed that Holmes filed for divorce from Fiebig in New York City. The estranged couple share daughter Sabine, 10. The Arkansas native also shares daughter Brianna and son Jaiden with ex-wife Amy Ferson, whom he divorced in 2007.

Holmes and Robach haven’t publicly commented on their relationship status, but earlier this month, an insider told Us that the pair are “seriously in love” and plan to be “fully open” about their romance in the coming months.

“Amy has no regrets,” the source added. “She wants to keep her job, but even if she loses it, she’s in love.”

The coanchors have been benched from the third hour of GMA since December 5 so ABC could conduct an internal review about how and when the duo’s affair began. “T.J. and Amy are not on camera currently because ABC wants to make sure it’s able to do a full review of their relationship before bringing them back on air,” an insider told Us in December 2022. “ABC is putting resources in so there are no surprises and they have all the information they can before deciding how to proceed.” 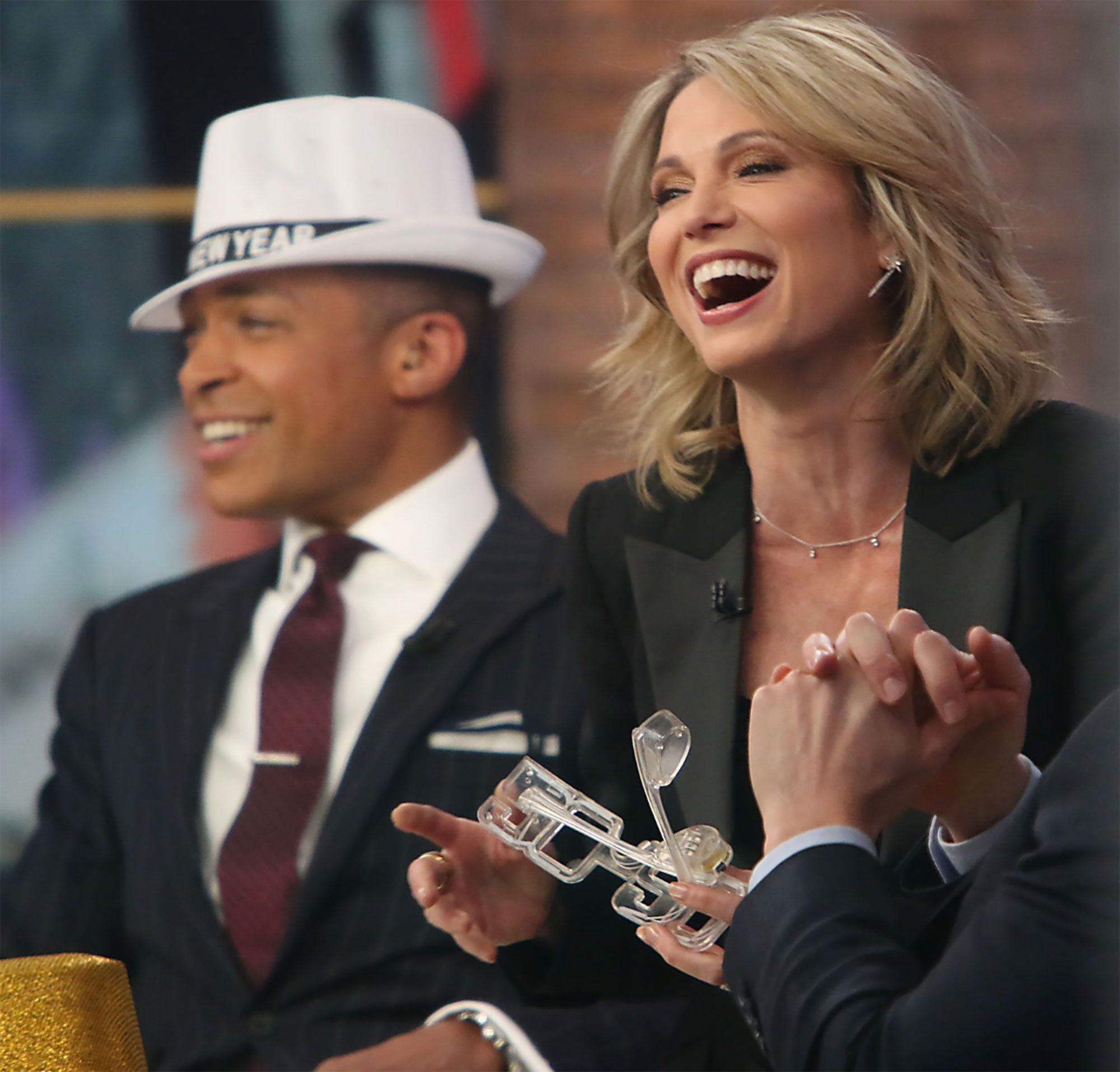 The network hasn’t given any public updates about the twosome’s status, but an insider recently told Us that Robach and Holmes won’t be returning to GMA.

“Amy and T.J are out, a decision has been made,” the source claimed earlier this month. “The network is negotiating with them on their exit deals and an announcement.”

In the meantime, the pair have been spotted jetting to Miami, where they packed on the PDA after Christmas. Days later, Fiebig spoke out about her estranged husband’s behavior in a statement shared via her lawyer.

“We continue to be disappointed by T.J.’s lack of discretion, respect and sensitivity toward Marilee and the party’s daughter,” Stephanie Lehman told Us on January 4. “Marilee has been touched by the outpouring of support and looks forward to a new beginning in this new year.”

Two days later, Fiebig celebrated her daughter’s birthday with an Instagram post that didn’t mention Holmes. “And then she’s 10! Happiest birthday to this wonderful human of mine, who pours so much goodness into the world,” the attorney wrote via Instagram at the time. “Knowing Sabine is in itself a blessing, so the privilege of raising and loving her feels like the gift of my lifetime. Sending so much love and thanks into the universe to my incredible family, who started the birthday week with a NYE surprise celebration, and to friends near and far, who have showered my baby with all the birthday love.”