PSA: If you feel like Amy Schumer has been pregnant for a long time at this point, the comedian wants you to know that you’re not alone. I know it’s hard to believe, but the I Feel Pretty star is still in her third trimester, and she’s not happy about it. Amy Schumer’s Instagram photo confirming she’s still pregnant is as hilarious as you’d expect it to be, and you’ll probably spending at least a few minutes LOL’ing at the shot.

With the countdown to the royal baby well underway, the comedian took to Instagram on Friday, May 3 to poke fun at the fact that yes, she’s also still pregnant, and yes, it feels like she’s been expecting her bundle of joy what for what seems like an awfully long time at this point.

In the photo, which appears to have been taken at a doctor’s office, the mom-to-be’s pregnant belly can be seen taking center stage. Schumer, who’s dressed in a yellow shirt that reads "I Hate Mondays," is seated in front of what look like a sonogram while her husband, Chris Fischer, sits in the background. Newsflash: She’s very much pregnant, and she’s tired of it.

"Oh yeah does it feel to everyone like I’ve been pregnant for a long time?" the Trainwreck star captioned the photo.

The star’s latest post is the latest PSA to share that contrary to fan theories, Schumer has not given birth yet.

On April 22, speculation that the 37-year-old had already welcomed her first baby began swirling after she recommended the book "Expecting Better" by Emily Oster on Instagram. Her wording that the book "got [her] through pregnancy," had fans assuming that her pregnancy journey was over — until she took to the social media platform to hilariously confirm that that was not the case.

Just one day later, she shared a photo of her walking with her husband with a third-person caption that poked fun at the jargon used in celebrity gossip.

"Amy Schumer And Chris Fischer set pulses racing while the heavily pregnant Schumer flaunts her growing bump," she wrote. "Amy is still pregnant and puking because money rarely goes to medical studies for women such as hyperemesis or endometriosis and instead goes to things like d*cks not getting hard enough or old guys who want harder d*cks."

The point is, Schumer is still very much still expecting, and will be until further notice.

One reason that the "Growing" star might be so keen for her pregnancy to be over is that she suffers from hyperemesis gravidarum, which happens to be the same condition that Kate Middleton had when pregnant with each of her three children. According to WebMD, the condition is characterized by severe nausea and vomiting, making it an extreme version of morning sickness symptoms. Schumer referred to it as throwing up "an Exorcist amount every day."

"I have not had an easy pregnancy," the star explained in her Netflix special Growing. "I have hyperemesis, which I’d never even heard of. It’s extreme nausea and vomiting. If you’ve ever had food poisoning, it’s that. I’ve had that every day for five months … People are like, ‘You’re so strong, look at you out there! You’re on the road!’ I’m contractually obligated to be out here, guys. I’m not like, ‘The show must go on.’ I’m like, ‘I will be sued by Live Nation. That’s why I’m here.”" 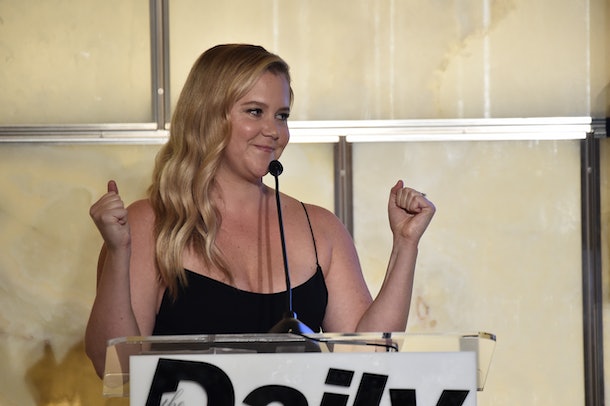 Jokes aside, the star is now in her third trimester, so she probably doesn’t have too much longer until she welcomes baby Schumer into the world.