Another win for Hannah Gadsby as Netflix acquires second show

The Australian comedian announced on Tuesday that her hour-long comedy special, named after her beloved pet dog, will be available on the streaming giant from next year. 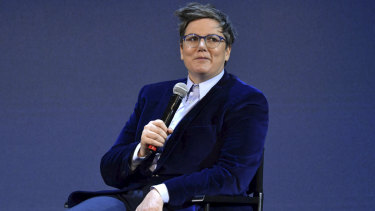 Hannah Gadsby has confirmed her latest stand-up show, Douglas, will debut on Netflix in 2020.Credit:Netflix

"I'm so excited to announce today that Douglas will be released on Netflix in 2020," she said in a statement. "I'm really enjoying touring with the live performance, but there will be places in the world that I won't be able to visit, so it's wonderful that Netflix will bring the show to every corner of the globe."

Gadsby, who was born in Tasmania, is currently on the United States leg of her Douglas world tour. The stand-up show kicked off at the Melbourne International Comedy Festival in March, with reviewers describing it as a "far more upbeat" companion to her 2017 tour, Nanette.

Gadsby became a household name last year after Netflix aired an hour-long special of her Nanette performance at the Sydney Opera House. The show is peppered with musings on art history as well as poignant criticisms of sexism and homophobia.

The show netted her the Melbourne Comedy Festival's highest honour in 2017, with the Netflix adaptation landing her an AACTA Award for best performance in a television comedy. It also earned praise from celebrities around the world and, following its release, Gadsby was invited onto late-night talk shows and gave a rousing speech at The Hollywood Reporter's 2018 Women in Entertainment gala.

The comedian recently made headlines after introducing strict anti-phone measures for her Douglas tour, with all audience members required to lock their phones away in a secure pouch for the duration her shows. Fellow comedians, including Dave Hughes, were quick to support Gadsby's decision, describing phone-use during live shows as “a huge problem”.