Labor was poised to claim majority government as the vote splintered across the country, but had a clear pathway to victory by forming a minority government with the Greens and crossbench.

Labor leader Anthony Albanese will be the next prime minister as a teal wave wiped the Coalition’s chances of holding government, but voters also walked away from Labor in key seats. 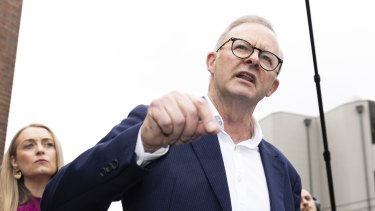 As voting continued on Saturday night, Labor frontbencher Bill Shorten declared it a “mighty night” as he expressed hope that Labor would still form government in its own right.

“Obviously we’ve got colleagues fighting for their political lives, some against the Greens, still hard-working candidates who are waiting to see what’s happened, but this is a mighty night. This is a big night,” Shorten, a panellist on Channel Nine’s election coverage, said.

“Certainly there’s a teal quake going on. But let’s not take away from Labor.”

Labor’s climate change spokesman Chris Bowen said although some seats too close to call, he was confident that Labor would form majority government.

“I think it is fair to say the most likely outcome is a Labor majority in our own right,” he said.

Shortly after 9pm, ABC election analyst Anthony Green declared the path to victory for the Coalition had evaporated.

“I would say the Coalition government has been defeated but at this stage it is not clear what sort of Labor government we will get,” Green said.

Labor was poised to snatch a handful of inner-city seats from the Liberals, including the Sydney seat of Reid, and Melbourne seats of Chisholm and Higgins, but looked set to lose the Brisbane seat of Griffith to the Greens. The Greens were also in front of Labor in the tussle for the Liberal-held of Brisbane.

Labor was making ground in four Liberal-held seats in WA and was likely to take the SA seat of Boothby.

“We need to heed the message because forming government in the future without winning those sorts of seats is a next to impossible task.”

Among the disastrous results for the Liberals at the hands of independents was the triumph of Allegra Spender over Dave Sharma in Wentworth, the victory of Kylea Tink over Trent Zimmerman in North Sydney, and former ABC journalist Zoe Daniel outsing Tim Wilson in Goldstein. In the Treasurer’s seat of Kooyong, Monique Ryan was poised to depose Josh Frydenberg.

Former Liberal foreign minister Julie Bishop said the loss of Frydenberg would be a “huge upset” and “an enormous loss to the nation”, but said the triumph of teal women in heartland Liberal seats must prompt a reckoning within the party.

“When the Liberal Party carries out the post-election analysis, they must address the issue of women in the party. So many Liberal women told me they did not see their concerns, their interests reflected in the party that was led by Scott Morrison and in Coalition with Barnaby Joyce,” she told Nine.

Liberal frontbencher Jane Hume said the party had “missed something in Victoria” amid swings to independents and Labor.

Hume said “we thought there would be a bigger Dan Andrews effect in Victoria and there hasn’t, which I find disappointing”.

“We have had such negative feedback about those harsh lockdowns in Victoria and we thought that may play out in those outer suburban areas. Clearly they haven’t,” she told Channel Nine.

Independent Warringah MP Zali Steggall, who retained her seat, dismissed the idea of forming a third political party with the teal independents but declared the results showed a “new wave of politics” had been delivered by voters.

“It is a real moment for the major parties to rethink the arrogance that they don’t have to consult with communities any more,” she said.

Shorten said the two-party duopoly was now in question.

“There is no doubt there is a fracturing of what is the Australian identity,” he said.

“Different parts of Australia think very differently to each other. The idea you just have two brands [of parties] and that’s it, that’s certainly up for grabs, that theory.”