Do they give out trophies to the Young Australian of the Year? If so, 2019 recipient Baker Boy will need to make some room next to it on his mantelpiece after sweeping the ARIA Awards’ major categories on Thursday night and taking home five awards in total. 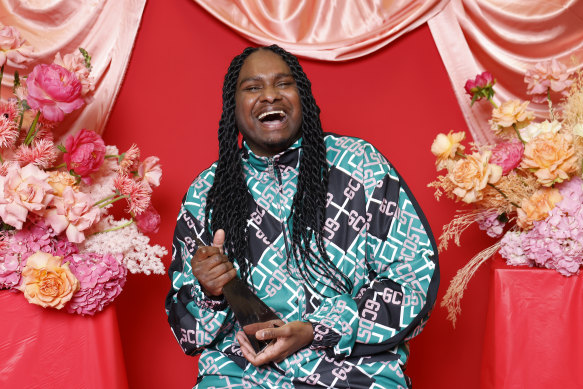 Baker Boy clutches the ARIA award for Album of the Year in delight.Credit:Hanna Lassen/Getty

His album of the year win marks the first time an Indigenous Australian artist has claimed the ARIA Awards’ top prize in its 35-year history, and follows young Kamilaroi man The Kid Laroi’s win as best solo artist (with Justin Bieber) last year.

Reflecting Australia’s ever-burgeoning hip-hop movement, it’s also the second year in a row that the winner of the best hip-hop/rap release has claimed the overall best album prize, following Genesis Owusu’s groundbreaking win for Smiling with No Teeth in 2021.

While Baker’s throwback party flow is far removed from the globe-conquering drill and trap music of local rap’s top streaming stars, such as The Kid Laroi, Hooligan Hefs and OneFour, few would begrudge his wins.

The Arnhem Land/Darwin rapper has been one of the country’s most consistent performers since he first attracted Triple J attention in 2017, and Gela was an ambitiously personal statement filled with his trademark rapping in language and outspoken activism. It even featured a wonderful cameo from the late Jack Charles. 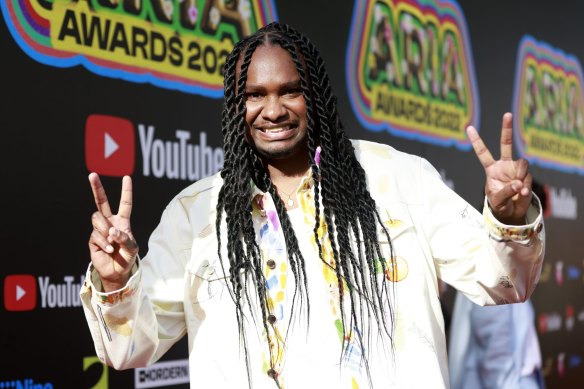 Baker Boy, all smiles at the 2022 ARIA Awards at the Hordern Pavilion in Sydney.Credit:Hanna Lassen

At the National Indigenous Music Awards in Darwin in August, Baker similarly swept the top categories, winning for artist of the year and album of the year.

Accepting the album of the year award from host G-Flip and last year’s winner Genesis Owusu on Thursday night, Baker delivered his speech in his native Yolngu language, before returning to the stage to breakdance and play didgeridoo in an energetic performance of Gela track Meditjin.

Speaking to media back stage, he explained his speech was a personal thank you to everyone involved in the album as well as his partner, “who’s always been there for me”.

“Pretty much all that, but in language,” Baker said. “Speaking in language [means I] represent my people and show off Yolngu culture.”

Later, he dedicated his win for best hip-hop/rap release to young people back home in Arnhem Land. “I did it, I’ve been there, and I know you mob can as well,” he said.

The winner of the best soul/R&B release was Coodjinburra/Bundjalung singer Budjerah. In an onstage protest criticising ARIA’s failure to nominate a full field of five artists in the category, presenter Illy wore a T-shirt featuring names of some of the popular local R&B musicians the awards shunned, including A.Girl, Becca Hatch and Lara Andallo.

The late Gunditjmara/Bundjalung singer-songwriter Archie Roach, who died in July, won best independent release for One Song off his career-spanning anthology My Songs: 1989-2021. The award was accepted by Roach’s granddaughter and singer-songwriter Emma Donovan.

Budjerah, Thelma Plum and Jessica Mauboy united onstage to perform the song as part of a posthumous tribute to Roach, which had been led by Peter Garrett and Briggs and earned a standing ovation from the live audience.

“I never met someone who was so considered and so warm,” said Briggs. “When Uncle Arch embraced you, he embraced you like family.”

Backstage, Baker Boy also reflected on the loss of both Roach and Uncle Jack Charles this year.

“It just shows us that we have to step up for the next generation and be the person they were, taking over the big roles and looking after the young ones,” he said.

The night’s other big successes were Melbourne punk-rockers Amyl and the Sniffers, who took home the awards for best group and best rock album for their wiry Comfort to Me, and The Wiggles, who also won two awards, for best children’s album for ReWiggled and the publicly voted best Australian live act for the OG Wiggles Reunion/Fruit Salad TV Big Show Tour.

Other winners included Tones & I, who won the publicly voted song of the year for Cloudy Day (possibly some karma after her smash Dance Monkey lost out on the prize back in 2019), and Luude, who won best dance/electronic release for his hit drum’n’bass remix of Men At Work’s Down Under, featuring Colin Hay.

The Tasmanian DJ, real name Christian Benson, beat out the night’s top nominees Rufus Du Sol, who went in with seven nods but came out with just one win for best produced album for Surrender. The Sydney trio will be seeking a better showing at the Grammys in February, where they’re nominated twice (although they’ll be facing off against Beyonce herself).

The show ended with a delightfully campy tribute to Olivia Newton-John, with host Natalie Imbruglia singing Hopelessly Devoted to You, singer Kye launching into Xanadu, and Tones and I and Peking Duk doing the Grease hit You’re the One That I Want.

Ahead of Thursday’s ceremony, which was held at Sydney’s Hordern Pavilion with a live audience for the first time since 2019, the ARIAs had flirted with controversy following the release of nominations in October.

Bowraville rapper Tasman Keith questioned the chart performance criteria that kept his acclaimed The Colour Undone out of the nominations for best hip-hop release, while Brisbane artist Mallrat criticised the rock focus and lack of gender diversity in the major categories, saying: “what this industry deems as credible is overwhelmingly indie rock and rock fronted by men”.

In response to the criticism, ARIA CEO Annabelle Herd had sympathised with concerns that “non-male artists [were] underrepresented” and pledged to “tackle that at [the] source”.

Thursday night’s celebration of Indigenous excellence – across the major categories and the often overlooked rap and R&B spheres – should at least buy the organisation a temporary reprieve.