Australian singer Sheldon Riley has booked a slot in this weekend’s Eurovision Song Contest final, being held in the Italian city of Turin.

As competition heats up for Europe’s highest musical honour, 20 semi-finalists, including Australia, will now head into the final to meet the so-called “big five” – France, Germany, Spain, the UK and Italy – as well as Ukraine. 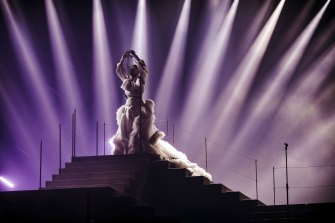 Sheldon Riley performs for Australia at the Eurovision Song Contest at the PalaOlimpico in Turin, Italy.Credit:Nathan Reinds / EBU

Securing a position in the semi-final win means that Riley’s song and performance have won the backing of both the professional juries in the competing countries, who score their competitors, and the “tele-voting” TV audience, who watchedon Friday (AEST).

Points from both the audience and the jury are merged to cull 35 semi-finalists down to 20. Greece, Switzerland, Armenia, Iceland, Lithuania, Portugal, Norway, Ukraine, Moldova and the Netherlands moved into the final after the first semi-final.

The Eurovision leaderboard is the subject of substantial speculation in the weeks, days and hours leading up to the competition. And experts are combing through every frame of the dress rehearsal performances, which can be viewed online, looking for clues or weaknesses. 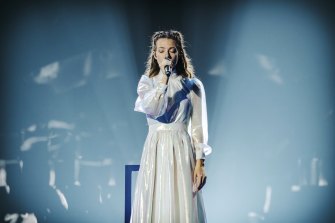 In competitive terms, it is clear Ukraine has a substantial margin over the other competing countries. But in the leading pack are also Italy, Sweden, Greece, Poland and, for the first time in many years, the UK.

Italy’s Mahmood and Blanco, singing Brividi, have enormous stage power. Sweden’s Cornelia Jakobs, singing Hold Me Closer, has the imprimatur of a six-time Eurovision winning country. Greece’s Amanda Georgiadi Tenfjord, singing Die Together, came from the sidelines in rehearsal, propelled by a good song and great voice, while Poland’s Ochman, singing River, are both buoyant and classically Eurovision.

In the midst of those performances, the UK’s Sam Ryder emerged as a slightly unexpected contender. The UK’s staging is patchy but the song (Space Man) and singer are solid, and off the back of strong dress rehearsals – the song will not debut in official competition until the weekend – it is generating substantial buzz behind the scenes.

As many are now anticipating a win for Ukraine, off the back of a strong song and performer, but also as a reaction to the Ukraine-Russia military conflict, the focus is already shifting to where the contest might be held in 2023.

It is Eurovision custom that the winning country hosts the following year’s event, but with much of the country’s major infrastructure damaged or destroyed by war, the general sentiment behind the scenes is that another country is likely to step in.

The winning country has declined to host at least seven times in Eurovision history, including in 1963, when France passed on it after winning three times, and in 1972, when Monaco had won the previous year but lacked the facilities to host the contest. In both of those cases the UK stepped in to host the contest.

The European Broadcasting Union (EBU) would most likely offer the first runner-up country the option to host the event, and would then probably offer it to one of the “big five” countries.

Meanwhile, Stockholm’s Mayor Anna König Jerlmyr has contacted the Ukrainian ambassador to Sweden to confirm that Stockholm would be willing to host the competition if Ukraine wins, the newspaper Aftonbladet reported.

Stockholm is a “sister city” to the Ukrainian capital Kyiv and has offered to host a number of other events, including sporting events, which were cancelled or delayed because of the Russian invasion of Ukraine.

Australia’s future in the competition is also due for discussion, according to the competition’s executive supervisor Martin Österdahl. Under the current agreement, Australia has been invited until the 2023 competition.

Asked today whether Australia had a longer-term future in the competition, or whether a permanent invitation might be extended, Österdahl said it would be “discussed with the Reference Group in due time”.

The 10-member Eurovision Reference Group is composed of several current national delegation heads, executive producers (from two previous host countries, and the current host country) and other broadcast and Eurovision experts. They are used periodically to shape Eurovision policy.

Despite a declared position of political neutrality, Eurovision has been drawn into the political fallout from the Russia-Ukraine conflict. Under pressure from other competing countries – and the risk that they would withdraw en masse – the EBU was forced to expel Russia from the contest.

Though Russia had not officially announced an artist or song, the move represents the first time in the history of the contest that an artist has been penalised by the EBU for the actions of their national government.

Italy’s 2021 winners, Måneskin, are expected to perform at the final on the weekend.

The television audience for Eurovision is estimated to be 182 million viewers, drawn from the 40+ participating countries, the United States on the Peacock streaming platform and in other territories via the EBU’s YouTube web streams.